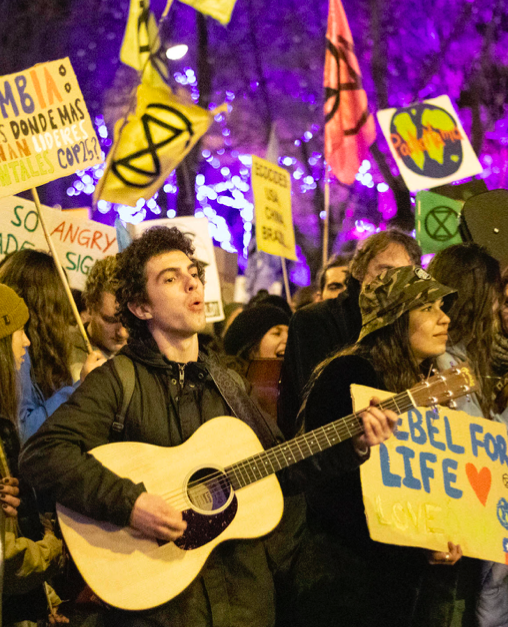 THE SOUND OF PROTEST

“As I went walking that ribbon of highway/I saw above me the endless skyway/I saw below me that golden valley/This land was made for you and me.”

These are the immortal words of Woody Guthrie, the grandfather of 20th century protest music.

There’s no question that critical music contributes to periods of significant social change. Popular protest anthems have featured in most generations. The late 1950s to 1960s saw Bob Dylan, Pete Seeger, Joan Baez, and many others rise to the fore of popular music. Although the songs that stuck in the zeitgeist largely refer to the Vietnam War, they also sung about lynchings, racism and McCarthyism.

The punk generation during the Thatcher and Reagan years saw a development of protest music that was somewhat louder than the troubadour with the acoustic guitar. Punk questioned authority in a fundamental way, both in attitude and words. However, we do not remember punk climate protest songs as emblematic of that generation.

Today’s pioneering social movements have one key difference from those of past generations: the status quo’s destruction of the natural world. The endless wars and systemic injustices continue. Protest music is a moving organism that shares elements across struggles and epochs, but must seek it’s era- defining voice.

When Guthrie wrote the lines to This Land is Your Land, he had the privilege of being white in America. He was a champion of the working class and a communist in mid-century America, but without the blues there would be no Guthrie. The music created by those who had been enslaved influenced the folk protesters of Guthrie’s time.

This Land is Your Land has had verses added to it that more explicitly represent Indigenous groups: “This land is your land/It once was my land/Before we sold you Manhattan Island/You pushed our nations/To the reservations/ This land was stolen by you from me.”

We are discovering that voice worldwide as social movements uniting in a call for system change and international solidarity. We are finding the protest voice that drives us wherever we are, and the result is more than keeping spirits high – it is to be the indefatigable pulse of our movement.

Mark is a songwriter, activist and journalist. Find him on Twitter at @MEMontegriffo and Instagram at @markeliotmusic