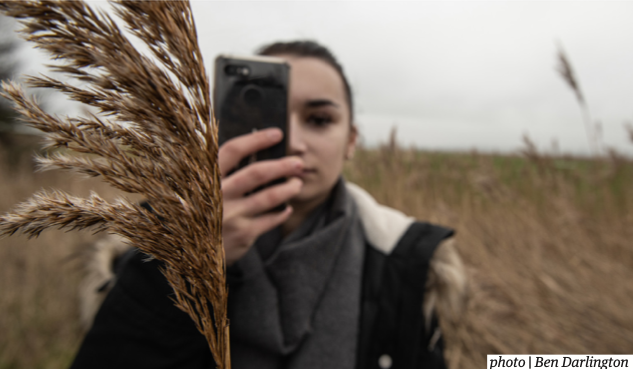 Over 90% of adults under 55 own a smartphone, with excessive use linked to anxiety, social and behavioural problems. Technological advances such as smartphones are also cited as causes of the growing human disconnection with nature.

We surveyed people about their smartphone use, their relationship with nature and anxiety. The results showed that higher smartphone use was linked to higher anxiety and taking selfies. Selfie-taking is a good example of how new technology shapes and defines human behaviours. High levels
of smartphone use were also linked to a weaker relationship with nature. On the flip side, people who were more connected with nature had lower ‘problem phone use’ scores, spent much less time on their phones and they also took 90% fewer selfies – they preferred to take pictures of nature.

In many cases it’s not the technology that is good or bad, it’s what we decide to use it for

More widely, the impact of technology on our relationship with nature is reflected in our culture, through music, books and films. When studying works of popular culture throughout the last century the references to nature have declined – nature now seems to have less meaning in our lives. During this time the state of the natural world has also declined.

Researchers have found that dips in references to nature occurred alongside the dawns of new technology, such as television in the 1950s and video games in the 1980s. The recent widespread use of smartphones may see another new dawn of further disconnection, potentially accelerated by social media, which reflects and ultimately shapes culture itself. Similarly, as references to nature have declined, individualistic words have increased in popular culture, for example songs are now more likely to refer to ‘me’ than ‘you’.

We have successfully used smartphones to prompt people to notice the good things in urban nature. When people did this for only one week, their nature connection improved, leading to clinically significant improvements in mental health. In many cases it’s not the technology that is good or bad, it’s what we decide to use it for.

Smartphones place new ways to engage with nature in our hands. Slow-motion video recording software allows us to watch everyday nature in an extraordinary way. Fixing our broken relationship with the rest of nature doesn’t mean going back to non-existent halcyon days. The ubiquitous smartphone can help open our senses and tap into nature – the ultimate network.