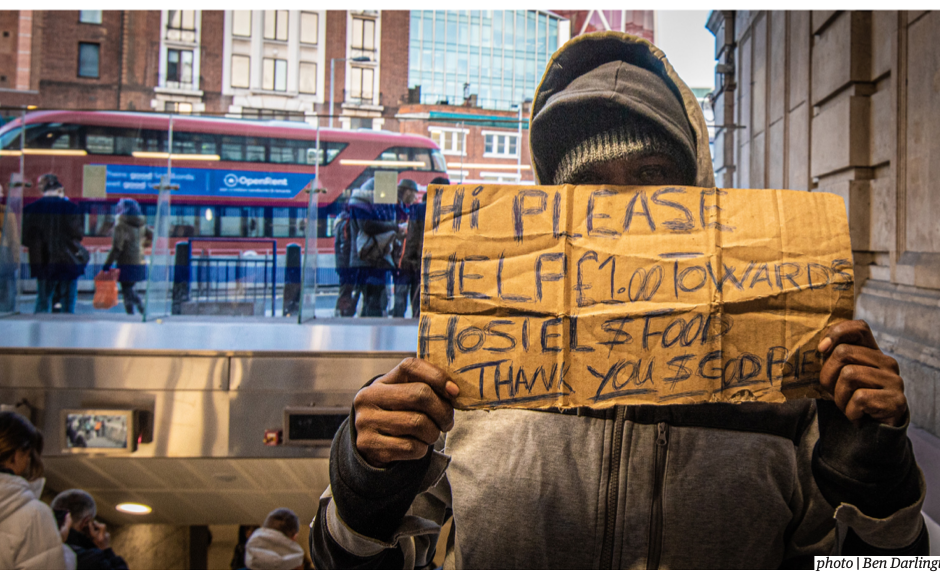 According to more than 230 studies looking at weather events around the world, there is evidence that human activity is increasing the risk of extreme weather.

The reality of worsening weather conditions has not gone unnoticed by more vulnerable members of society.

“Any extreme weather condition is going to make a homeless person’s life more difficult,” Paul Blake, who has experienced homelessness twice and currently lives in a hostel in Bristol, told The Hourglass.

Severe weather emergency protocol (SWEP), the government’s emergency response requiring local councils to provide emergency accommodation for all rough sleepers during extreme weather, helped Paul find a place in a night shelter last winter. However, “in these shelters you need to be out by around 7:15 in the morning and you can only go back at around 9pm at night. So you have all these hours where you really don’t know what to do,” Paul adds.

This problem led Paul to come up with the Right to Shelter initiative in Bristol, which provides homeless people with a shelter during the day – a crucial initiative during a climate and ecological crisis that will lead to more extreme weather events.

Lee Thornley had been a school manager when difficulties hit and he ended up on the streets. “Extreme weather makes sleeping on the streets even more difficult,” said Lee. “In January 2017, during the big freeze, I was living for months on the edge of a reservoir in a tent that was provided to me by the local job centre in Lancashire. I thought I would die. I experienced cold, rain, and hypothermia. I was hopeless, so I started drinking alcohol.”

“I was very lucky to have found these fantastic people here at St Petrock’s. I have now managed to quit alcohol for three weeks – I don’t need it any longer.”

Not everyone manages to survive. In 2018, 726 homeless people died in England and Wales, a figure that has been increasing by almost 25% year-on-year for the last six years. While unemployment, poverty and a lack of affordable housing are among the key social factors contributing to homelessness, researchers argue that extreme weather conditions not only affect the lives of people sleeping rough but also potentially increase homelessness.

“Natural disasters caused by climate change affect people in the lower socio- economic strata more heavily, as they are exposed to more extreme conditions and have less capacity to adapt to climatic change,” explained Sotiris Vardoulakis, Professor of Global Environmental Health at the Australian National University.

In the UK in particular, where flooding is the most common form of natural disaster, “properties of people from the lower socio- economic groups are more prone to damages and then once their home is damaged, relocation is always very poor and carried out under extremely difficult conditions,” Vardoulakis added.

A 2017 study published by the World Wildlife Foundation (WWF) found that over 1 million homes are currently at high risk of flooding, and by 2050 that number could be nearly 2.5 million – a rise of almost 130%. Greenpeace’s Unearthed investigation revealed that around 13,000 homes are about to be built across England in high-risk flood zones, increasing the number of people at risk of becoming homeless as a consequence.

Low energy efficient housing is another factor that could contribute to more people losing their homes, according to Dr Neil Jennings, Partnership Development Manager at the Grantham Institute – Climate Change and the Environment at Imperial College London.

“The UK has a big problem with energy efficient housing, as there are about 320,000 households with a really poor energy rating,” he said. “This translates to an extra annual cost of £1,000 in order to properly heat and light these homes,” he adds.

According to Dr Jennings, in addition to the extra annual cost, “poor insulation and low energy efficient housing has a knock-on effect, as kids living in these houses get ill easier, missing school, and their parents having to stay at home to look after them, therefore missing work, exacerbating the problems most of these families already have as they struggle to pay their bills.”

“We need to improve these conditions by making it more affordable for people living in these houses,” Dr Jennings concluded.

The Boilers on Prescription project run by Islington Council demonstrates how taking action on climate change can result in greater energy savings, poverty alleviation and ultimately a reduction in homelessness. The project enables GPs of patients living in cold, damp homes to ‘prescribe’ double-glazing, boilers and insulation to their patients in order to address the root cause of their illnesses, rather than dealing solely with the symptoms.

As a result, the project has reduced NHS costs in the area while simultaneously decreasing greenhouse gas emissions and improving the quality of the housing stock. The Boilers on Prescription project reported a 60% reduction in the number of GP appointments and a 30% decrease in accident and emergency visits.

In 2018, almost 1 in every 200 Britons was homeless in the UK; that is an estimated 320,000 people, which is a 4% increase since 2017. According
to homeless charity Shelter, “we need to change this by securing consistent, long-term funding from the government for a new generation of public homes at low rents.” Shelter also urges anyone who sees people sleeping rough to inform local authorities via Street Link, the UK’s national referral website.

Owain Astles, a filmmaker focusing on homelessness, said: “We need to collectively put pressure on the government, as homelessness needs to be addressed at a legislative level, putting in place a policy that gives better and more affordable housing to people.”

“This can be done by writing to your local MPs, local councillors, local Mayors and national government, challenging them to address the homelessness crisis by providing more affordable homes and to stop penalising people on benefits or low incomes.”