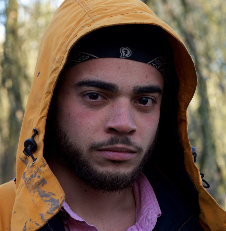 I CLIMBED A 60FT TREE TO SAVE COLNE VALLEY

I had been at the Stop HS2 camp in Colne Valley since the summer. Initially I’d only wanted to visit, but I fell in love with the area. This little patch of heaven was under threat of being bulldozed for the sake of HS2 – a ridiculous plan to build, with no regard for nature or its residents, a new high speed railway that comes with an immense price tag to provide journeys that, at over £300 a ticket, only a few would be able to afford.

To me the idea of such a monstrosity, carved like a scar through our beautiful green land, seems a crazy way to spend taxpayers’ money, when we all know that money is needed more urgently to address the climate and ecological emergency. This new high speed train scheme demolishes the idea of a greener country. In Colne Valley I witnessed total disregard for the animal inhabitants; for example bats found roosting in trees were surveyed by ecologists, and cordons were put around their homes to protect them, but the tree cutters working for HS2 ignored the signs and cut them down anyway.

Holding the site has been a journey in itself. One day a group of us were sat around the campfire in the early morning when we saw bailiffs coming in the back way – a large number of them. We noticed the haste in their step and realised this was the eviction we had been expecting. I quickly rushed to my bolt tree – this was my first eviction, my adrenaline was running high but it was time to make a stand.

Up the tree I started filming a livestream for Extinction Rebellion UK’s Facebook page while the police cut the lines from my bolt tree to my base tree which had all my essentials in, including my hammock, bedding and snacks. The stand-off began, I with nothing but what I was wearing. As the day went by I was bombarded with sweet talk from the bailiffs and police who were trying to entice me out the tree, but they quickly switched to threats.

A climbing team was also trying to catch me, almost like a dangerous game of cat and mouse 30 feet off the ground, forcing me higher and higher to evade capture so that eventually I was over 60 feet off the ground. The tree climbers made a hasty retreat, saying they wouldn’t dare climb as high as me after noticing a split in the tree about halfway down; they didn’t want to risk their lives. I was now holding on for dear life as the freezing breeze swayed me in the treetop; I was hoping the tree would hold me, just as I was holding the tree.

Eventually I was overcome with cold. I had to leave the tree and the camp was evicted. But the following morning we retook the site and
it is now a thriving camp of earth defenders again.

‘This new high speed train scheme demolishes the idea of a greener country. In Colne Valley I witnessed total disregard for the animal inhabitants; for example bats found roosting in trees were surveyed by ecologists, and cordons were put around their homes to protect them, but the tree cutters working for HS2 ignored the signs and cut them down anyway’

If you are able to visit any one of the camps along the proposed train lines, please do. Bring tents and sleeping bags; there is food, a fire and good vibes. The protectors need your support. Please also help to spread the message of the destruction that they are causing to our beautiful country and the way they are irresponsibly spending taxpayers’ money on this ridiculous vanity project. If we don’t take a stand for the trees, who will?