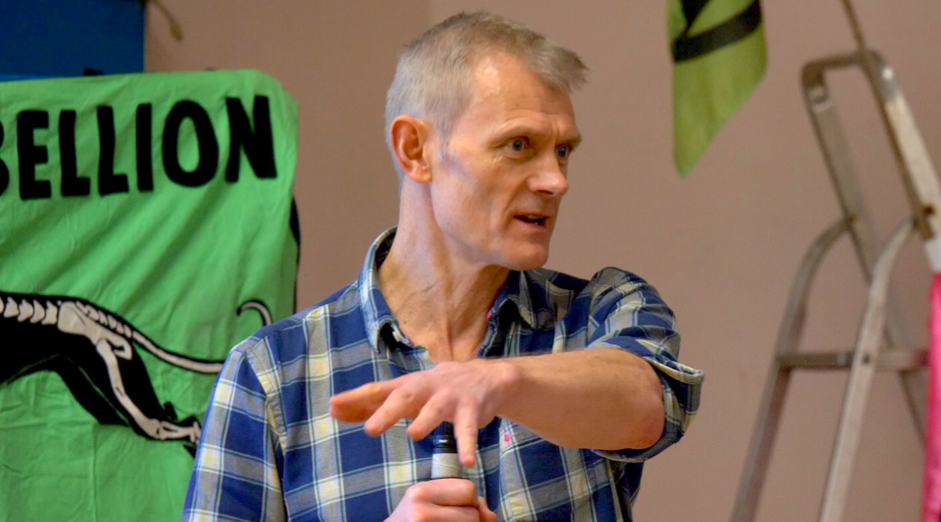 Listening to Professor Kevin Anderson talk about climate science is like plunging into the winter sea: vivid and uncomfortable, but ultimately life-enhancing. His message, and the way he presents it, are bracing.

This is because the facts that the Professor of Energy and Climate Change at the University of Manchester has to convey are often stark. He speaks about the fact that the UK Government’s frequent assertion that carbon dioxide emissions have decreased by 44% since 1990 is wrong because it doesn’t include shipping, air travel or imports and exports. He tells us that the true figure of 10% was mostly achieved by accident rather than policy. Firstly through austerity after the 2007 banking collapse, and secondly as a result of coal-fired power stations being closed because of European Union regulations on sulphur.

Anderson is unapologetic about his talks: “Often people say, ‘Isn’t it difficult being so straight-talking?’ but actually I think it’s easier. I don’t have to think: what white lie did I come up with last time? If I make mistakes, I try to rectify them. I don’t try to fudge it. I think it’s just easier to be honest.”

In his view, the purpose of an academic is to tell the truth: “Our job in society is to do our work carefully and diligently and report back our conclusions and findings with some humility in case we get them wrong but also with bluntness. We mustn’t hide it. We’re not there to spin the facts.”

I met Professor Anderson this week in an under-heated church hall in Walthamstow at the end of the Victoria line. It was a cold Tuesday evening in January and his day had already been a long one, involving an early train ride from Manchester, and a day talking to civil servants at the Department of Work and Pensions in Westminster, yet his energy and passion was inspiring.

I’m an engineer:
I used to design and build offshore oil platforms. Engineering can do a lot, but it cannot overcome problems of time. And we have left it too late. We’d need a TARDIS to solve this

I asked Professor Anderson what his thoughts were on climate activists pressuring governments for change. His reply: “Which is more rebellious, living with 3 or 4 degrees of warming or trying to stay within 1.5 to 2?

“I think these things need to be turned on their heads. If you’re living in the coastal strip of Bangladesh, do you think Extinction Rebellion are rebels because they’re trying to stop the conditions that are adversely affecting your life and your children’s lives?”

Wikipedia tells me that Kevin Anderson’s age is fifty-seven, but his abundance of energy belies that fact. Perhaps his vitality is down to his hobby of cycling in the Peak District where he lives. He volunteers that this is one of his favourite ways of spending time.

Anderson credits the Youth Strikes and Extinction Rebellion with shifting public debate in a way that he and other climate scientists haven’t been able to. However, he prefers to talk about climate budgets rather than net zero figures. Anderson dislikes the term ‘zero net carbon’ because it assumes emission reductions in the future will be cheaper, which burdens future generations with that task. He jokes that the word ‘net’ might as well mean ‘not’; ‘zero net carbon’ meaning ‘not zero carbon’.

When I ask him what he thinks of Extinction Rebellion’s commitment to zero net carbon in 2025, he does something he rarely does. He hesitates.

“Ambitious.” Is how he eventually answers. “If we want to stay well below 1.5 degrees warming then the claim that we need to be somewhere near net zero by 2025 is pretty robust. In fact, we need to be zero about now.

“To be blunt, I don’t think we can achieve 1.5 and we may be over it already, depending on how sensitive the climate is. But if you ask me if I could give a scenario about how we’d reduce our emissions in line with that, I can’t imagine how to do it.”

I ask Anderson about the UK Government’s target of 2050 and what that means for warming, were the rest of the planet to follow suit, and he laughs. He is just about to release a paper on exactly this subject but it is between 4 and 6 degrees of warming. He describes exactly what that means:

“It’s not this planet. It involves changes way beyond anything that we have witnessed as humankind and actually when you look back through geological time periods, it’s very seldom you see anything like this.

“We’ve had about one degree warming in the whole of the modern human period going back 10,000 years and we haven’t had CO2 at over 400 ppm for at least a million years. Some put it at 5 million years. We are in terrain we have no experience of. We are changing the concentration of carbon dioxide in the atmosphere almost overnight.”

Anderson is scathing about those who rely on the developing negative emissions technology to solve the problem: ‘I heard Minister Matt Hancock say the other day that we can just use technology in the future. I’m an engineer: I used to design and build offshore oil platforms. Engineering can do a lot, but it cannot overcome problems of time. And we have left it too late. We’d need a TARDIS to solve this.’

It’s not that Anderson thinks we shouldn’t invest in negative emissions technology, but that we can’t rely on it magically turning up in time to save the day. The problem is more intractable than that.

For Anderson, sticking to our Paris Agreement commitments is incompatible with neoliberal economics. That, in his view, is why so many academics keep silent: “Challenging the paradigm because it no longer fits with your conclusions is still a taboo subject.”

For Anderson the way forward will need us to address the fact that the richest 10 or 15 per cent use a disproportionate amount of the carbon budget. We will need rationing, and it will have to be organized in a way that is obviously fair.

Anderson’s talk is called Can Meaningful Hope Spring From Revealing the Depths of Our Climate Failure? When I ask him where this hope might come from, given the difficulties of our task, he surprises me:

“I don’t think academics with Powerpoints and numbers are particularly helpful. We need lots of other ways of engaging. We need people in the Arts and Humanities to bring this debate to the public in a more accessible form.”

After his talk, Anderson stands courteously talking to the lingering members of the audience, some of whom are visibly flagging. We head to the pub, where he escorts a partially-sighted person to the Tube station. As they move in and out of the pools of light beneath the street lamps, I hear him vigorously discussing carbon tariffs, and walk away feeling that this man is a real force of nature.