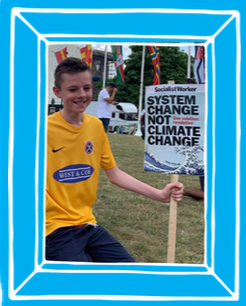 Have you heard this said before? ‘Global leaders were driven by a primitive fear that the present ambient warm weather is somehow caused by humanity; and that fear
– as far as I understand the science
– is equally without foundation.’

That is the view of a resident in No.10 Downing Street. Yes, the British Prime Minister uttered those words in 2015, and now he is representing this country on the world stage.

Frightening, isn’t it? Frightening that Boris Johnson, alongside his good friend who claims that this climate emergency business is just a hoax, are among the world ‘leaders’! According to his American friend Donald Trump, as long as it’s snowing, this global warming malarkey is simply false.

So, we have these men on the world stage failing to see the emergency that our house is on fire. I’m sure if the White House or Downing Street were on fire they would soon take note.

However, they are unable to see the damage being done – especially in the Global South. Or perhaps a more simplistic way of looking at it is that they can see it staring them in the face, but they are afraid that the economy will get damaged.

Just take the Tory manifesto as an example – only 10 times is the climate emergency mentioned – an emergency – mentioned less times than Brexit. Quite frankly what is this Brexit deal going to be worth if this planet becomes uninhabitable?

So we declare a climate emergency – great! Yet we can see the inaction. I, along with many of you readers, am frustrated and angered by the election result. But just remember you have a voice. We have a voice. We can see straight through government inaction – so let’s shout about it and keep on shouting.

I worry that this coming decade you may feel defeated, but when you feel like quitting and conceding defeat to these big businesses and governments just remember one thing – why you started.