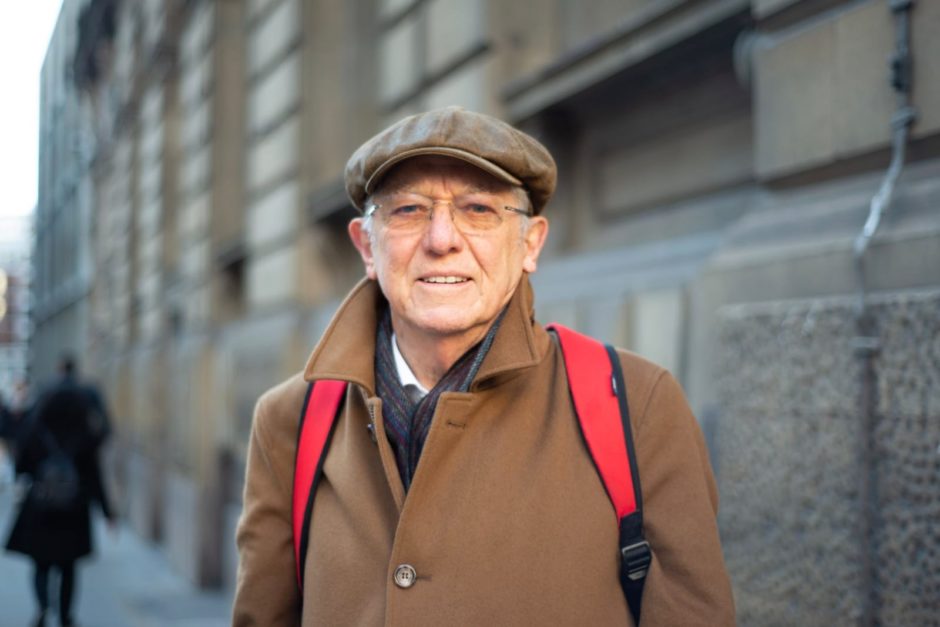 Sir David, who offered written evidence in defence of the five, gave this interview outside court, in which he speaks of the important role of Extinction Rebellion in raising awareness of the climate crisis, his fear for his own grandchildren, and the need for urgent government action.

“What we need is much more action, much more clarity on the action that is needed, and we need it with a public voice… At last we’re hearing the public in a way that we haven’t for many, many years.” Sir David King

As business woman Claudia Fisher, one of the five defendants, says in the video, Sir David’s compelling evidence supports the claim of ‘necessity’, a common defence in Extinction Rebellion trials that the action was necessary to avert the immediate loss of life. “Sir David King is backing us up on that,” she says.

The case against the five collapsed before Sir David’s evidence could be considered. All the defendants were acquitted because the arresting police officer had been allowed to go on holiday and was not present at the trial.

Handing down his decision at City of London Magistrates Court, Judge Vincent McDade said there had been an “abject failure” by the CPS to ensure the case was properly managed. The arresting officer had been a “vital witness” in order to establish or otherwise the lawfulness of the arrest. “I have no options but to dismiss all matters against all defendants,” he said.

The five defendants – who were all arrested on 10 October 2019 during the peaceful action in which they glued themselves to the concourse between the DLR station and the airport – were Claudia Fisher, 57, a business woman from Brighton; Phoebe Valentine, 23, a maths student also from Brighton; David Lambert, 60, a historian from Gloucestershire; Senan Clifford, 59, a former teacher also from Gloucestershire; and John Burrage (aka Ben Bont), 42, a tree surgeon from West Wales. They were all charged with aggravated trespass, which carries a maximum sentence of three months imprisonment.

In Sir David’s written statement to the court, he warns that without an immediate change of course, the world is facing a 3-4 degree temperate rise which would lead to “unmanageable risks”.

“Lives would be saved if the UK Government were to bring forward the net zero emissions target, based on a full risk analysis alongside a full procedural analysis to achieve the target, and to take a clear leadership role on the international scene leading to COP26 in Glasgow, November this year,” he writes.

“Climate change represents the greatest threat that humanity, as a whole, has ever had to manage,” he writes. “We are all involved and we need to work together with urgency to generate the pathways to a safer world.”

Read his statement in full here

Sir David King: “What I’m here for is that this is providing a voice to the public that gets into the public domain. And that is critically important because governments listen to people and so this whole action – Extinction Rebellion, Greta Thunberg, all of these issues – are important and NEW. At last we’re hearing the public in a way that we haven’t for many, many years on this issue.“

Claudia Fisher: “The evidence that Sir David King has put forward – we’re waiting to see if it will be admitted as evidence – it’s very, very compelling evidence. In it he says that lives will be saved if the government brought forward their 2050 net zero commitment. Which effectively means that if they don’t, lives will be lost. And that means that that really proves our argument of ‘necessity’. We are actually trying to save lives here and Sir David King is backing us up on that.“

Sir David King: “Everyone thinks the British Government has been doing nothing. It’s not true. Without Britain, we would not have had the Paris agreement. No government did as much as we did to achieve that. However, no government, including ours, is doing enough today. So what we need is much more action, much more clarity on the action that is needed, and we need it with a public voice.

And that’s what Greta Thunberg and Exitnction Rebellion have done. They’ve put it back on the front pages. Here I am being interviewed quite regularly. Not because I’m a new person on the field. It’s because these people have put it back up there.“

Claudia Fisher: “I think he knows more than anybody really how desperate our situation is. And he probably is seeing this as an oopportunity to spread the message as well. So people really need to understand that we are facing an enormous crisis right now. And that there is no time to waste. We need to act now. We don’t argue about when we finish doing what we need to do, it’s when we start. We need to start today.”

Sir David King: “I’ve gone on record as saying I’m afraid. I’m afraid for future generations. I’m afraid for my children and their children, my grand children. I’m afraid because we haven’t been taking the actions that the science has been telling us to take for a very long time.

“This sounds a bit like Greta Thunberg’s voice. And she gets it. She said listen to the scientists. So I think the most important thing here is to say: this is a brave attempt by a group of people to get this onto the front pages, get the media taking an interest, again, in this critically important issue.“