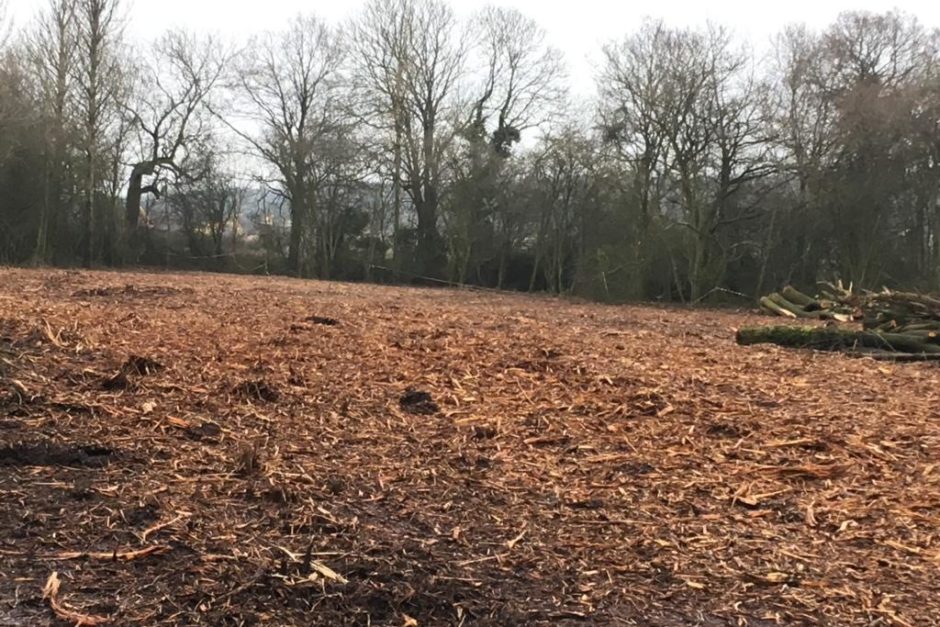 HS2 tree felling increases: “Clear as much as you can, as quickly as you can”

HS2 have upped their tree felling efforts recently, despite increasing criticism and uncertainty over the future of the high speed rail project.  The project is still under review and has no notice to proceed – yet enabling works continue.

In the past week significant areas of woodland and wildlife habitats were cleared near Welsh Road, Cubbington, Leamington Spa, with locals reporting that HS2 contractors were told: “Clear as much as you can, as quickly as you can, because this contract might get cancelled.” Similar destruction is continuing along the HS2 proposed route.

On Monday three StopHS2 local campaigners were arrested trying to halt clearance works on Ridgeway lane, off Welsh Road. HS2 contractors continued to destroy hedgerows, vital islands for biodiversity, and prepared to fell trees.  Yesterday more than sixty campaigners from all over the UK were successful in preventing a tree-grabber from destroying woodland and hedgerow, with no arrests. HS2 contractors are continuing to carry out clearance work for the rest of the week.

This weekend (31 Jan-3rd February), Save The Colne Valley, Extinction Rebellion and StopHS2 join forces again in a show of solidarity and strength with established protest camps along the proposed route and plan for more action.

Camps in Harvil Road, Great Missenden, Wendover, Welsh Road, Cubbington and Crackley woods are united in their call to stop HS2, resist and shine a light on the ongoing destruction and support local communities to protect their land and futures.

The weekend event, named “Still standing for the Trees” will include tree climbing and non-violent direct action workshops, talks and nature walks, skill sharing, and planning to support and strengthen camps protecting woodland and wildlife along the line.

Campaigners are calling for people to join to stop ongoing clearance in Cubbington and tree felling starting on Monday in Denham Country Park nature reserve, Colne Valley, when construction of bridges and temporary roads over the river Colne begins. Some 4,000 trees have already been felled in the Colne Valley, known as the Green Lungs of London, worsening air quality in London and driving climate breakdown.[1]

In response to the last “Stand for the Trees” event, two weeks ago, HS2 cancelled planned work, due to the presence of hundreds of environmental campaigners. Precious woodland and wildlife habitats along the road and the adjacent rail track,which had been purposely closed for the work, were saved [2].

As well as costing the UK-tax payer well over $106 billion, the high speed rail project is set to cause extensive and irreversible damage to the environment. [3] The government must scrap HS2 immediately explain their plan to meet net zero emissions, and instead use the money to improve and invest in local services and projects that adapt to the reality we face in this Climate and Ecological Emergency.

Joe Rukin, campaign manager of StopHS2, said: “This weekend is a massive opportunity to find out about HS2; how it is so destructive to the natural environment and the fact that it is no solution to our climate and ecological emergency – as we plan to build for more action along the proposed route. Boris Johnson must realise that he will now be held personally responsible for any decision about HS2, so he had better get it right.”

Sarah Green, Save Colne Valley and local resident, said: “HS2 plans here will contaminate the water for 3.2million people which we believe is not only illegal, but it is immoral and it has to be prevented [4]. People being here and in other camps along the proposed route shines a spotlight on HS2 and bears witness to what is happening. We need people here next week to stop the tree felling in Denham Country Park.  The only way HS2 can get away with this is if it is done behind closed doors – without anyone raising objection – and we are shouting from the rooftops.”

Matt Bishop, Cubbington Woods camp, walked the length of the proposed HS2 line last April to learn more about what would be lost, said: “We have magistrates, lawyers, doctors, teachers and company directors in this campaign, people who care about our environment. Everybody can become part of this and support it.  People have gathered in Cubbington from all over the country; Birmingham, Liverpool, Leicester, Coventry to save our countryside. What made it successful was the presence of numbers of people. We don’t need HS2, we need our trees and countryside. Boris Johnson and his advisors must stop the whole project now.”

Amy, tree climber at Colne Valley, said: “We need to act together, and when we do, we have significant power. I want people to know that anyone can do this. I first climbed a tree last week, but I am determined to remain here. HS2 will poison our drinking water, destroy our precious wildlife and it’s the biggest deforestation seen in this country since world war one, during an ecological emergency! This situation is an example of the bigger picture – insane and unaccountable decisions made by a reckless few with too much power.”.

In Colne Valley environmental protectors at Harvil Road wildlife protection camp remain in trees along with those who have been on site since October 2017, resisting eviction attempts from bailiffs to save the precious woodland and wetlands.  HS2 tree felling is due to start on Monday in Denham Country Park, Colne Valley.

Wendover resistance camp is directly in line of the viaduct, and is set up with a watch tower, and rope walkways between trees, and are prepared to hold the land as long as they can.[5]

Campaigners are invited to attend the HS2 community engagement drop-in, on Friday at Harefield Library from 2pm to 5pm. Extinction Rebellion and Stop HS2 is urging everyone to write to their MPs to urge them to stop HS2, and to video any evidence of illegal HS2 behaviour and tweet Chris Packham #HS2evidence. Near a number of camps badger setts have been found illegally covered by with wire and wooden posts, these have been reported.

[1] Why we need to double UK tree cover, Friends of the Earth https://friendsoftheearth.uk/trees

[2] Action at Colne Valley more successful than ever hoped for

Woodland Trust map of woodlands under threat by HS2 https://www.woodlandtrust.org.uk/protecting-trees-and-woods/campaign-with-us/hs2-rail-link/?fbclid=IwAR2fkhARPurcbARWhBTmG8ea1VeTsD109IzPUx3mIEdkB-I3vjd3W0B8jqs

Wildlife Trust: What’s the damage? Why HS2 will  cost nature too much

The high speed rail project is set to destroy over a hundred ancient woodlands [5] and almost 700 wildlife sites [6], 24 Site of Special Scientific Interest be a net carbon contributor 120 years into the future, link up aviation expansion plans across the country, and poison an aquifer which provides 3.2 million people with water — and cost the UK taxpayer well over £106 billion.  Countless rare and protected species are found in these woodland and wetlands but their presence is being ignored or hidden by HS2.

Colne Valley nature reserves and wetlands, known as the green lungs of London, is a Special Area of Conservation and London’s Western Nature Reserve.  HS2 plans in Colne Valley are to clear the wetland nature reserves and construct power stations, access roads, worksites and pile drive into an aquifer risks contaminating the drinking water of 3.2mllion people. HS2 has already destroyed 4,000 trees and rising water levels due to ongoing HS2 construction work are threatening the habitats of endangered species such as the water vole. HS2 contractors have been illegally blocking badger setts with wire and wooden posts, this has also been reported by other camps.  Another 28,000 trees are marked for felling and 100 acres of ancient woodland, 60 acres of wetland, three nature reserves and a site of Special Scientific Interest and 2,400 species of flora and fauna are all under threat.

The Colne Valley chalk aquifer supplies over 1bn litres of water to 3.2m Londoners every day. HS2 plans to drill pile holes deep into the chalk ground will risk this water supply becoming contaminated by waste from a special landfill site located nearby. This risk was highlighted by Affinity Water, one of London’s main suppliers who draws 60% of its water from the source, in a report to the House of Commons six years ago.

Campaigners at Save Colne Valley and Scott Ainsley, Green MP for London put in a claim to the European Parliament against the UK government for breaching the EU Water Framework Directive for the enabling works at Colne Valley and its impact on 3 Inner Source Protection zones for drinking water. Save Colne Valley campaigners say no water safeguarding permits in place and that in the interest of public health HS2 must be scrapped before more irreversible damage can take place.