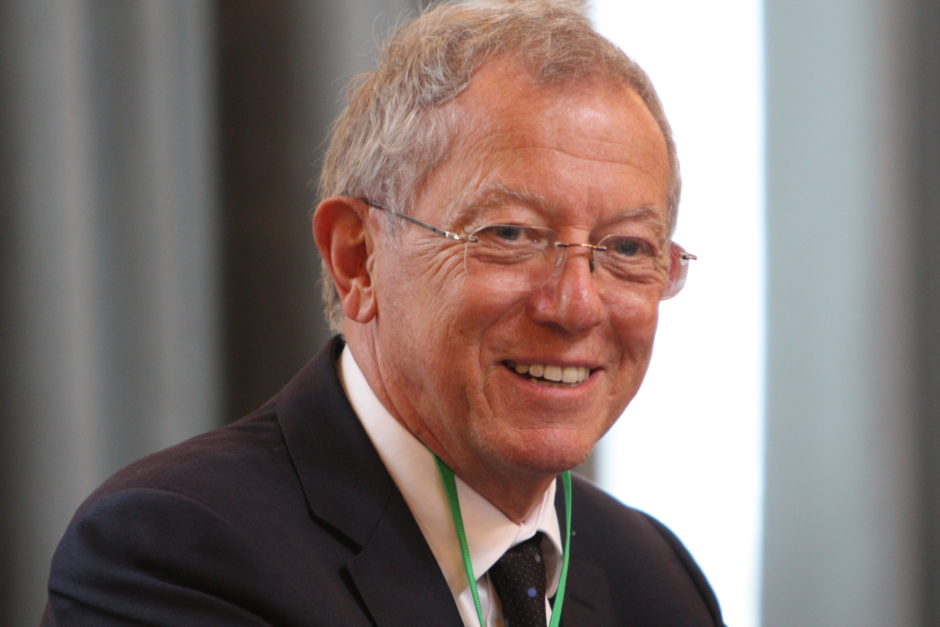 For more information, copies of the expert witness statements or to arrange interviews with Sir David King, Jay Griffiths or the five London City Airport defendants, contact Zoe on 07918 165 046.

Sir David – who served as chief scientist under Tony Blair and Gordon Brown – has prepared an expert statement, in which he highlights the “important role of Extinction Rebellion” in raising awareness about the climate crisis.

During Tuesday’s trial, Sir David King, currently Emeritus Professor at Cambridge University, will sit in the public gallery to watch the legal argument about whether his evidence will be admitted.

The five people on trial who were arrested on 10 October 2019 during the peaceful action – in which they glued themselves to the concourse between the DLR station and the airport – are: Claudia Fisher, 57, a business woman from Brighton; Phoebe Valentine, 23, a maths student also from Brighton; David Lambert, 60, a historian from Gloucestershire; Senan Clifford, 59, a former teacher also from Gloucestershire; and Ben Bont, 42, a tree surgeon from West Wales.

In his statement, Sir David says the world is on course for 3-4 degrees Celsius of warming by the end of the century, based on current policy commitments, and that lives would be saved if the government committed to achieving net zero emissions earlier than 2050. Extinction Rebellion is calling for a net zero target of 2025.

Sir David writes that “vocal public concern” has raised awareness of climate change and pressured politicians to take action. “Extinction Rebellion is playing a similarly important role [to Greta Thunberg] in the UK and elsewhere. The attention of news media and the pressure of ‘ordinary voices’ raises the visibility of the issue of climate change. It is hard to see how the global temperature rise is to be limited, on average, to 1.5 deg in the very narrow timeframe still available unless it becomes a matter of real urgency within the spheres of national and global politics.”

“Climate change represents the greatest threat that humanity, as a whole, has ever had to manage. We are all involved and we need to work together with urgency to generate the pathways to a safer world.”

Read the statement in full here.

Extinction Rebellion’s London City Airport protest called for the UK government to issue a moratorium on all airport expansion and to conduct a national review.  It also highlighted the incompatibility of a planned half a billion pound expansion with the Government’s legally binding commitment to become net carbon neutral by 2050. [1] [2] Twenty one airports are planning to expand by 2040, potentially leading to a 67% passenger increase. By 2050 aviation is projected to account for 25% of UK carbon emissions. [3][4]

Award-winning writer Jay Griffiths will also be on trial on at 9.30am on Tuesday at City of London Magistrates Court (EC4N). Jay – author of eight books who has written for the Guardian, Orion and The Idler, among other publications – is charged with a breach of Section 14 of the Public Order Act. She was arrested at Oxford Circus during the April Rebellion. [5]

Jay hopes to submit witness statements from three experts to support her defence: John Ashton who was the British Government’s climate change Ambassador and Special Representative for three successive Foreign Secretaries; George Marshall, specialist on climate communications for the IPCC and the UK government; and Professor Justin Lewis, Professor at Cardiff University Research Centre in Journalism and Media.

Defendant Claudia Fisher, 57, a mother of five from Brighton said: “The government response to the climate crisis is wholly inadequate, so much so that it is criminal. The government has a social contract to keep their citizens safe from forces that individuals cannot protect themselves from.

“I am scared, very scared about the future of my children and the future of children all over the world.”Defendant Phoebe Valentine, 23, a mathematics student at the University of Sussex, said:“The terrifying immediacy of our situation is hard to grasp but needs to be communicated, which is why I take action with Extinction Rebellion. I didn’t want to be arrested, it wasn’t fun, I would have much rather have been at home, but the devastation of our planet isn’t going to wait for me or any of us.”

“I am 23 and like many young people I dream and make plans. Until recently, the climate crisis was a distant worry – something that would effect future generations, not me. But science tells a different story. The mass devastation of our planet has already begun.”

Anneke Sutcliffe of Extinction Rebellion, said: “Allowing airports to expand is just one example of pouring fuel on the fire of increasing global carbon emissions. 21 airports in the UK have expansion plans on the table amounting to a 67% passenger increase by 2040. The Committee on Climate Change have told the Government that an absolute maximum of 24% increase should be allowed to enable us to keep within our 2050 carbon neutral target. We urgently need a moratorium, or better, a complete ban on airport expansion UK-wide to get this under control.

“We all know that the 2050 carbon neutral target is a death sentence. We are reaching tipping points and runaway climate change, the effects of which we are already seeing round the world. Extinction Rebellion will do what it takes to make this injustice heard loud and clear. We cannot keep prioritising profit, economic growth and entitlement to luxuries in this time of crisis. We have to radically turn things around. I salute these brave rebels who are on trial for their actions at City Airport in October, risking their own liberty to protect our childrens’ futures.”

Magdalena Heuwieser from the global Stay Grounded network said:
“We’re flying straight into climate breakdown and we for one can’t understand why aviation is getting special treatment from the government.
Growth of aviation cannot be greenwashed, its emissions cannot be offset, and technologies won’t save us. It’s time to reduce aviation. This includes shifting flights to the rail, taxing kerosene, putting a levy on frequent flyers, stopping airport expansion as well as acknowledging the climate impacts of aviation apart from CO2.”