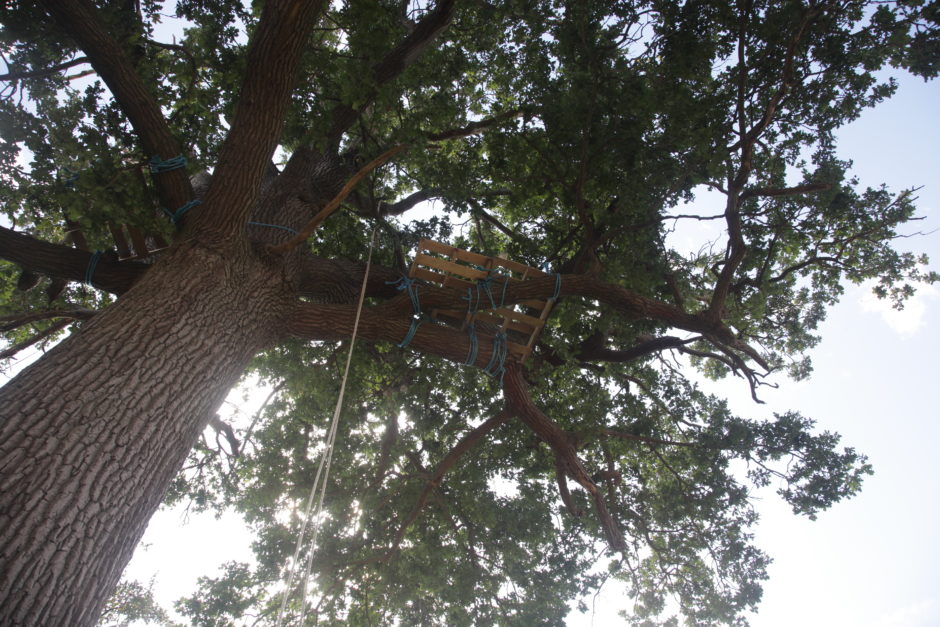 Extinction Rebellion activists have begun to mass in the Colne Valley, to prevent the felling of woodland planned by HS2 this weekend. The Rebels join longstanding activists from StopHS2 and Save Colne Valley to oppose the proposed operation. Hundreds of tree protectors are expected over the weekend, vowing to stop the trees from being chopped down, while adhering strictly to peaceful, non-violent principles and tactics.

Overnight an advance party of Rebels established a base camp from which to welcome more activists as they arrive. A series of trainings in subjects such as non-violent direct action, de-escalation and tree climbing are also being run out of the camp.

HS2 has abandoned its plans to close the Harvil Road after protestors promised to block and camp in the road, to prevent access to tree felling equipment and vehicles. The Chiltern railway line is still being closed for the weekend however, to facilitate tree felling along the track, which the tree defenders have vowed to block. [1]

HS2 also reportedly stated last night that it will instead be felling trees around nearby Ruislip, in an apparent move to make it harder for protestors to disrupt their activities. The activists have countered however that they are undeterred and will thwart HS2’s attempts to chop down the trees, wherever these may take place. They are confident of success, having previously done so in April 2019, with significantly lower numbers. [2]

The Colne Valley Park is an important area for biodiversity, especially the string of wetland habitats running down its centre. It has been called Our Amazon, the Lungs of London. It is home to 100 acres of ancient woodland, 60 acres of wetland, three nature reserves, a site of Special Scientific Interest and over 2,400 species of flora and fauna, including otters, water voles, eels, glow worms and 120 species of birds, amongst them barn owls, tawny owls, little owls, kestrels, kites, buzzards, sparrowhawk and peregrines. All of these are under threat.

Some 4,000 trees have already been chopped down and a further 28,000 trees are marked for felling. In addition, HS2 works would risk polluting the drinking water of 3.2 million people to the west of London, with its plans to drill through a chalk aquifer on the site.[3]

Along its entire length, HS2 will destroy or damage 693 Classified Local Wildlife Sites, 33 Sites of Special Scientific Interest and 18 Wildlife Trust Nature Reserves. Some have already been damaged, despite the project still being under review. [4] It will remain a net carbon contributor 120 years into the future and is completely incompatible with our government’s net zero emissions target. [5] Its spiralling cost has been estimated at more than £115 billion of taxpayers money – money which would be better spent improving existing infrastructure, and on local services and projects.

The deputy chair of the Oakervee Review, the review into the future of HS2, Lord Berkeley, resigned, saying he cannot support its recommendations or conclusions and published an alternate report in early January 2020 concluding that “HS2 is the wrong and expensive solution” recommending to cancel most of HS2 and upgrade existing infrastructure  [6]

Earlier this week, the Wildlife Trusts published a new report [7] revealing that the environmental damage of HS2 will be far worse than expected, urging the government to stop and rethink the project as it will “damage the very ecosystems that provide a natural solution to the climate emergency”.

The Harvil Road Wildlife Protection camp has been monitoring, highlighting and stalling HS2 destruction since October 2017. Over the past fortnight, HS2 bailiffs have evicted parts of the camp, without a High Court eviction notice. Eviction efforts are ongoing, which activists claim are unlawful. [8] HS2 claim they can evict the camp using Compulsory Purchase Order (CPO) powers, despite protesters having legal occupation of the land under the Criminal Law Act, and have not afforded protesters the opportunity to legally contest the eviction.

There are now effectively two camps, one along the roadside on Harvil Road and one in nearby woodland. HS2 bailiffs have entirely fenced the woodland camp in and are blocking all routes in and out, effectively denying access to and from the camp. This is despite protesters being legally entitled to occupy the land, which is council owned and not covered by HS2’s Compulsory Purchase Order. Three people have been arrested this week and appeared in court charged with public nuisance, for defending the woodland camp. Another was hospitalised with hypothermia after spending three days in a tree, during which he was denied access to water, food, and blankets.

Activists are calling for more people to come and protect the trees this weekend, for as long as they can spare, and to help defend the site on an ongoing basis.

Sarah Green, of Save Colne Valley, who runs narrow boat tours through the nature reserves, said: “It’s wonderful to see so many people come to Colne Valley to shine a light on this travesty of justice. HS2 is a horrendous project that will destroy our nature reserves. It destroys my job.  It’s evicting local businesses, farmers, the local outdoor activity centre, and people are being evicted from their family homes, even though the project is still under review. Our fresh air, water supply, our whole lives are being disrupted, for no benefit. HS2 is driving climate change, in this Climate and Ecological Emergency, we must stop HS2 and stop its destruction of nature.”

Joe Rukin, Campaign Manager of Stop HS2, said: “What we are seeing this weekend at Colne Valley is hundreds of people who have not fallen for the spin from HS2 Ltd and its vested interest corporate lobbyists, who are trying to greenwash this white elephant. HS2 has been designed from the outset to be as environmentally damaging as possible, with their own official forecasts saying the project would still be contributing carbon over 120 years in the future.

“What Boris Johnson has to ask himself is: does he want 10 or 20 years of direct action like this on his doorstep and the rest of the route, or does he want to invest in sustainable local public transport projects all across the country which would deliver more benefits to more people more quickly, for less money.”

[3] The Colne Valley chalk aquifer supplies over 1billion litres of water to 3.2m Londoners every day. Under the HS2 plans to drill pile holes deep into the chalk ground there is a high risk of this water supply becoming contaminated by waste from a special landfill site located nearby. This risk was highlighted by Affinity Water, one of London’s main suppliers who draws 60% of its water from the source, in a report to the House of Commons seven years ago.

[4] The Oakervee review was set up to review HS2 in August. In November a leaked draft copy of the HS2 Oakervee Review revealed the project may go ahead despite soaring costs. The deputy chair of the Review, Lord Berkeley, resigned, saying he cannot support its recommendations or conclusions and published an alternate report in early January 2020 concluding that “HS2 is the wrong and expensive solution”, with Berkeley telling reporters that HS2 costs are “out of control”, and that money would be better spent improving infrastructure in the north more details here. There is still no indication when the results of this review will be published.

[5] HS2s own analysis projects that it would still have a carbon footprint of 315k tonnes after 120 years and that’s not including construction, just operation. http://stophs2.org/facts

[6] Spiralling costs – HS2 is estimated to cost the UK taxpayer more than £100 billion.  Lord Berkely has said costs would be £107.92billion – this is before the cost of the trains is added. The cost of rolling stock would add another £7.9 bn. and take the total to approximately £115.8 bn. ( A Review of High Speed 2 by Lord Berkely). The Chairman of the National Infrastructure Commission Sir John Armitt estimates that it’s going to cost £43bn to connect HS2 to local transport networks (https://www.theengineer.co.uk/poll-post-election-future-hs2), taking estimates to more than £158 Billion.

The Harvil Road Wildlife Protection Camp has been on site since October 2017, defending the land and water, and repeatedly raising concerns over the impact of HS2 works in the courts.  Some 4,000 trees have been destroyed worsening air quality in London and driving climate breakdown. Future HS2 plans in Colne Valley are to clear the wetland nature reserves and construct power stations, access roads, worksites and to drive hundreds of deep piles into the chalk aquifer across the valley for footings for a 3.4km viaduct.

HS2 Ltd has attempted to act to mitigate for wildlife loss, and failed. Trees planted in 2018 to replace woodland that has been lost were allowed to die, and HS2 said this was because watering them was too expensive.  HS2 Ltd had not yet replanted them