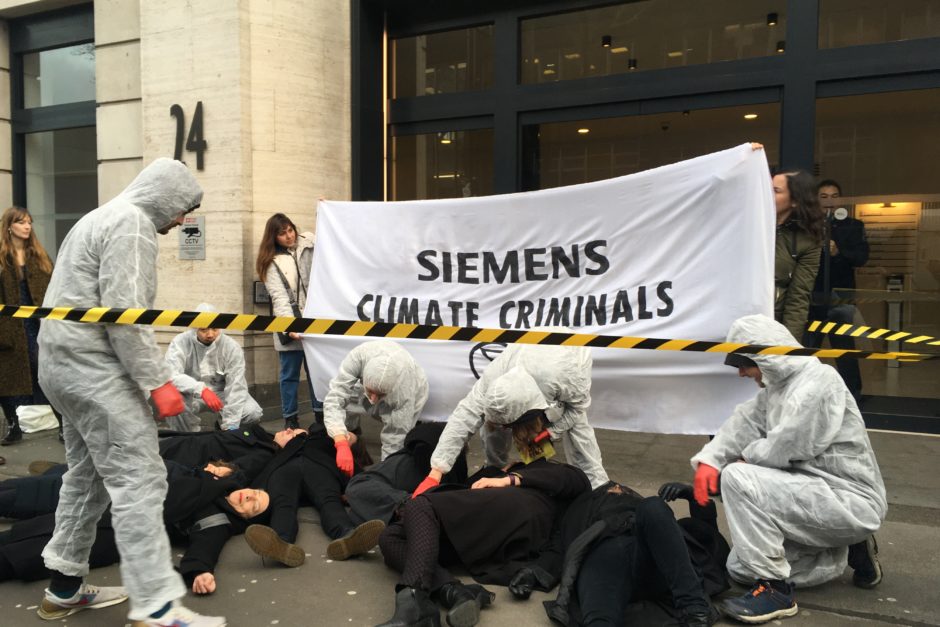 From 9am today, dozens of people from Extinction Rebellion UK have turned Siemens London office into a ‘crime scene’, following its decision to continue providing railway signalling services to the Adani coal mine in Queensland, Australia. [1]

Wearing forensic suits and red gloves, ‘police officers’ have created a police cordon around the entrance to the building while ‘victims’ dressed in black are lying on the ground. A banner has been dropped from a window in the building saying ‘Climate Change Kills Children’ while another bears the words ‘Siemens = Climate Criminals’.

The controversial Adani development has the potential to produce enough coal to cause more than 705m tonnes of C02 to be emitted each year – about 1.3 times Australia’s total current emissions. If even half that were produced it would result in emissions larger than those of most nations. So far 57 companies have withdrawn bids or refused to work on the mine. [2]

Siemens signed a contract to provide railway signalling services in October last year but CEO Joe Kaesner reconsidered the decision after coming under pressure from young people all over the world. He conveyed his “deepest sympathy and condolences to the ones, who have lost relatives and friends or their homes, livelihoods or were injured by the terrible bushfires in Australia” and said that protecting the planet was “mostly about leadership” but said he needed “to balance different interests of different stakeholders, as long as they have lawful legitimation for what they do”. [3]

Lorna Greenwood, mother of two, said “If Siemens supports the Adani coal mine it’ll be a stain on their history forever.

After the hell on earth what we’re witnessing in Australia, there are no acceptable excuses or justifications for furthering climate and ecological disaster.

Joe Kaeser, we can see you are tortured by this decision. There is still time. Clear your conscience and do the right thing. It’ll be the greatest display of leadership you’ll ever show and more importantly, you’ll be able to look your daughters in the eye.”

Protests are also happening for a second time at Australian embassies and Siemens offices around the world. Protests have taken place in over 40 countries from Argentina to Zambia. [6] The fires in Australia continue to cause untold damage to life and property and have already led to what scientists are describing as an ecosystem and species apocalypse in Australia. Some estimates state that up to 700 animal species have had their populations decimated – with many species likely to be pushed to extinction including the Long-footed potaroo, the Greater glider, the Kangaroo Island dunnart, and the Black-tailed dusky antechinus. [4]

[2] More information about the Adani coal mine can be found here: https://www.theguardian.com/business/2017/aug/16/why-adanis-planned-carmichael-coalmine-matters-to-australia-and-the-world

[4] Information on the impact of Australia’s fires can be found here: https://time.com/5761083/australia-bushfires-biodiversity-plants-animals/