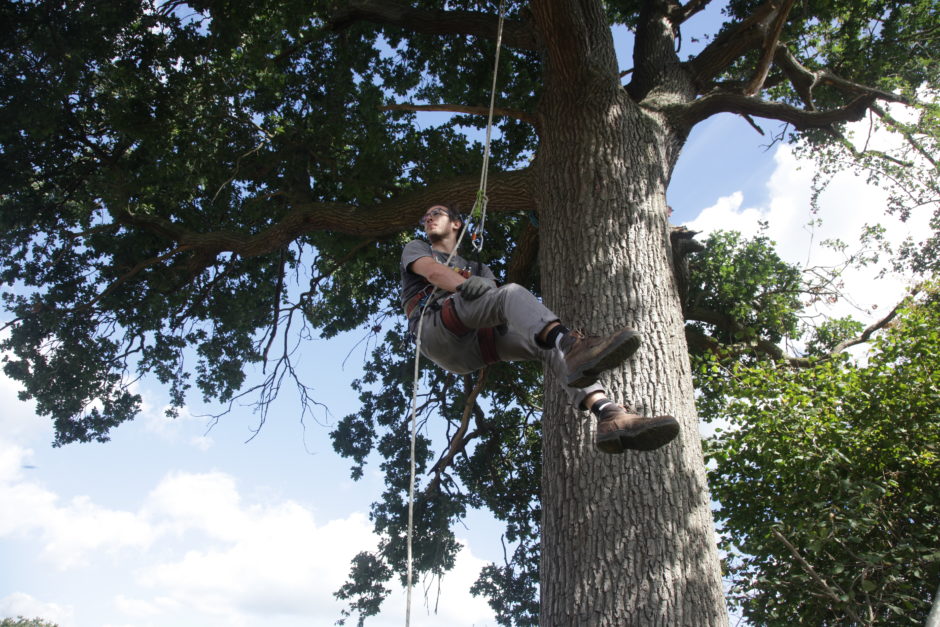 This weekend (17-20th January), Save Colne Valley, Extinction Rebellion and Stop HS2 join forces to save the trees that HS2 plans to fell along Harvil Road and along the Chiltern Trainline (UB9 6JW).  This follows a failed attempt in April 2019 by HS2 to remove the trees stopped by an earlier joint action on a smaller scale, when protesters took to the trees. [1]

Last week, HS2 bailiffs evicted the field part of Harvil Road Wildlife Protection camp – without a high court eviction notice. The camp has been monitoring, highlighting and stalling HS2 destruction since October 2017, and are opposing the eviction, claiming HS2 and the bailiffs are acting unlawfully.  The evictions are in preparation for planned felling and chipping of road and trackside trees to clear space for road building. [2] Despite the high winds and rain, environmental activists have taken to the trees, and will stay until forced down to deter HS2s ongoing eviction attempts, which are particularly focused on a remaining camp in the nearby woodland, while there is also another camp along the roadside on Harvil Road.  HS2 officials are saying they can evict the camp under Compulsory Purchase Order (CPO) powers, despite protesters having legal occupation of the land under the Criminal Law Act. Last week’s eviction was carried out without giving protesters the chance to contest the eviction.

Come join and save the trees
The camp is calling for immediate support to come and join the resistance effort with food, blankets and camping equipment welcome.  People have been invited this weekend to come for an hour, a day or even to camp – in this area of natural beauty as an act of creative nonviolent resistance. There are planned workshops, music and civil discobedience, where rebels can join the rebellion through disco. There will be walks around the beautiful lakes and woods to highlight what will be lost if HS2 plans go ahead.

The news comes as the Wildlife Trust today published a new report [3] revealing that the environmental damage of HS2 will be far worse than expected, and urging the government to stop and rethink the project as it will “damage the very ecosystems that provide a natural solution to the climate emergency”. The rail project will destroy or damage 693 Classified Local Wildlife Sites, 33 Sites of Special Scientific Interest and 18 Wildlife Trust Nature Reserves threatened. Some have already been damaged, despite the project still being under review[4]

“While Australia is burning, HS2 is destroying our nature right here in the heart of the UK,” said Sarah Green of Save Colne Valley. “At this time of Climate and Ecological Emergency, it is essential to safeguard our sources of drinking water and protect the wetland nature reserves, woodlands and wildlife of the Mid Colne Valley. To do this the HS2 project must be stopped – come join us this weekend and save the trees.”

Freeman, an environmental protector, who is camping in a tree day and night to deter eviction at the Harvil Road woodland camp said: “I have been protecting this patch of nature since August and I wouldn’t be able to sleep at night if I didn’t do all that I could. If we the few can slow down HS2, imagine what more people can do? Together, we all have the power to stop this tragedy. If not me, who? If not now, when?”

Joe Rukin of Stop HS2 said: “Due to an incomprehensible decision to have a 250mph running speed, HS2 has been designed from the outset to have a greater land-take and deal more damage to the natural environment than any single railway or motorway project in UK history.

“Not only will HS2 still be a net carbon contributor 120 years into the future but as is being shown it is wreaking an unprecedented level of damage on the natural environment which inexplicably has continued during this supposed review period. This Government must stand up to the vested interests who continue to lobby for this fraudulent white elephant and have the guts to cancel HS2 before it is too late.

“There are alternatives – more benefits could be delivered to more people, more quickly by investing in sustainable local transport in areas away from London that suffer from poor connectivity.”

HS2 – An express train service to ecological disaster
HS2 is an express train service to climate and ecological disaster and the first thing the Government should scrap if they are serious about our Climate and Ecological Emergency. It will still be a net carbon contributor 120 years into the future – it is incompatible with our government’s net zero emissions target [5]. HS2 is also promotes massive airport expansion in Birmingham, Manchester and Leeds. The aviation sector is one of the fastest growing polluters.  The controversial rail project spiralling cost has been estimated at more than £100 billion of taxpayers money – money which would be better spent improving existing infrastructure, and on local services and projects. The deputy chair of the Oakervee Review, the review into the future of HS2, Lord Berkeley, resigned, saying he cannot support its recommendations or conclusions and published an alternate report in early January 2020 concluding that “HS2 is the wrong and expensive solution” recommending to cancel most of HS2 and upgrade existing infrastructure  [6]

In Colne Valley, HS2 intends to build bridges across the Chiltern line for the new section of Harvil Road plus an access road for construction vehicles. This is a fraction of the environmental damage being delivered across the Colne Valley – 4,000 trees have already been felled. Another 28,000 trees are marked for felling and 100 acres of ancient woodland, 60 acres of wetland, 2,400 species of flora and fauna in the area, three nature reserves and a site of Special Scientific Interest are all under threat.

In addition, HS2 works would risk polluting the drinking water of 3.2 million people to the west of London with its plans to drill through a chalk aquifer on the site [7]. The planned works also threaten the 2,400 species of flora and fauna in this area, including otters, water voles, eels, glow worms, barn owls, tawny owls, little owls, kestrels, kites, buzzards, sparrowhawk, peregrines. 120 species of birds nest in the trees.

[4] The Oakervee review was set up to review HS2 in August. In November a leaked draft copy of the HS2 Oakervee Review revealed the project may go ahead despite soaring costs. The deputy chair of the Review, Lord Berkeley, resigned, saying he cannot support its recommendations or conclusions and published an alternate report in early January 2020 concluding that “HS2 is the wrong and expensive solution”, with Berkeley telling reporters that HS2 costs are “out of control”, and that money would be better spent improving infrastructure in the north. More details here. There is still no indication when the results of this review will be published.

[5] HS2s own analysis projects that it would still have a carbon footprint of 315k tonnes after 120 years and that’s not including construction, just operation. http://stophs2.org/facts

[6] Spiralling costs – HS2 is estimated to cost the UK taxpayer more than £100 billion.  Lord Berkely has said costs would be £107.92billion – this is before the cost of the trains is added. The cost of rolling stock would add another £7.9 bn. and take the total to approximately £115.8 bn. ( A Review of High Speed 2 by Lord Berkely). The Chairman of the National Infrastructure Commission Sir John Armitt estimates that it’s going to cost £43bn to connect HS2 to local transport networks (https://www.theengineer.co.uk/poll-post-election-future-hs2), taking estimates to more than £158 Billion.

[7] The Colne Valley chalk aquifer supplies over 1billion litres of water to 3.2m Londoners every day. Under the HS2 plans to drill pile holes deep into the chalk ground there is a high risk of this water supply becoming contaminated by waste from a special landfill site located nearby. This risk was highlighted by Affinity Water, one of London’s main suppliers which draws 60% of its water from the source, in a report to the House of Commons seven years ago.

The Harvil Road Wildlife Protection Camp has been on site since October 2017, defending the land and water, and repeatedly raising concerns over the impact of HS2 works in the courts. Some 4,000 trees have been destroyed, worsening air quality in London and driving climate breakdown. Future HS2 plans in Colne Valley are to clear the wetland nature reserves and construct power stations, access roads, worksites and to drive hundreds of deep piles into the chalk aquifer across the valley for footings for a 3.4km viaduct.

HS2 Ltd has attempted to act to mitigate for wildlife loss, and failed. Trees planted in 2018 to replace woodland that has been lost were allowed to die, and HS2 said this was because watering them was too expensive.  HS2 Ltd had not yet replanted them.