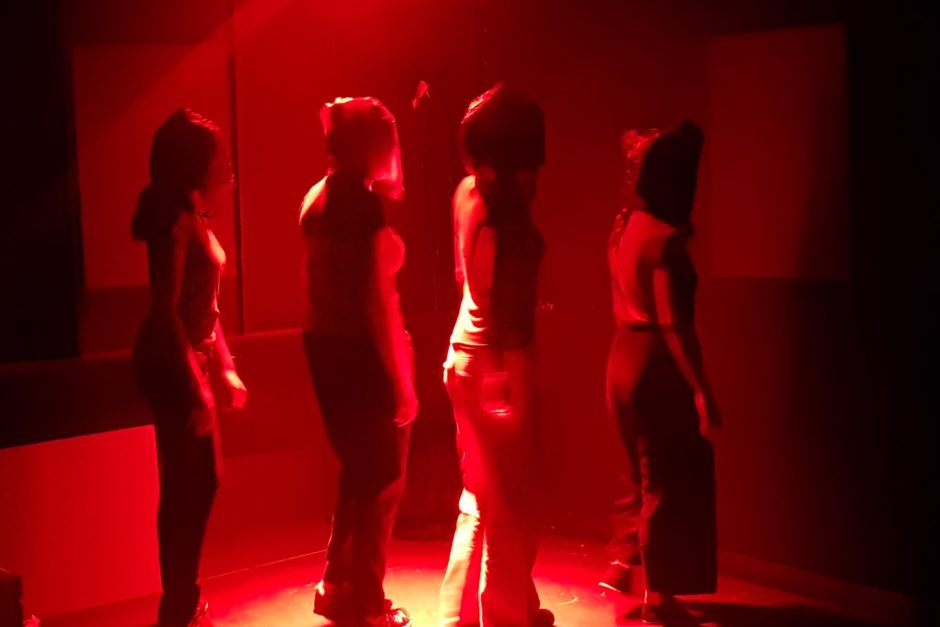 Reusable Theatre came into existence in response to the climate emergency, when I asked myself that difficult question: what can I do?

As a theatre maker, my instinctive answer was to create a theatrical response, with the aim of spreading the word and inspiring others to take action.

I called the piece This Play Will Solve Climate Change – aiming high! – and recruited four actors to devise it with me. The rehearsal process was an intensive time of discovery and exploration. We read widely, and interviewed people from all walks of life to explore the huge range of emotional responses to the global climate crisis. Then, using improvisation and theatre games, we gradually created four fictional women, of different ages and backgrounds, each dealing with the truth about the environmental crisis in their own way. We also added cameo roles for my two daughters, aged 7 and 11, to remind the audience of the future our children will face.

The piece has been performed in two different theatres and a library so far, and has received 4 and 5 star reviews. It has been moving and inspiring to see audience reactions to the piece.

Many people came out asking the question we began with – what can I do? – and in response to this feedback, we created a booklet of 52 Eco Actions, one for each week of the year (this is available to download for free; please email us for the link).

Reusable Theatre aims to spread the word by encouraging theatre and community groups to stage their own versions of the play – the script is available to all, royalty-free, for rehearsed readings, workshops and full performances. If you’re interested, please visit our website www.reusabletheatre. com or email reusabletheatre@ gmail.com

It is easy to feel completely helpless in today’s world, but through this project we’ve discovered it’s much easier to be hopeful when you’re taking action!

I play Dana and the Quiz Master in This Play Will Solve Climate Change. Sometimes, especially in conversations with climate deniers, I feel lost for words as there is so much to cover and it is difficult to do so with someone who does not want to hear the truth. This play gave me a voice, a way of talking about the issue to people who are not necessarily so knowledgeable about it.

According to the feedback we gathered, audiences who have seen the play have left feeling energised and wanting to act. Many people feel full of eco-anxiety and fear for the future – fear which can lead to paralysis instead of action. Theatre can tell stories that connect people and inspire them with hope, and that’s what we’ve aimed to do with this play.

When Laura invited me to get involved with this project I knew there was a climate problem that governments didn’t seem to be taking seriously, but it wasn’t something I’d thought about in depth.

Researching this play brought home the urgency and immediacy of the problem and made me aware of tipping points and the need to act now. Improvising how it feels to be an older person with children helped me to think ‘the unthinkable’ and consider the future my son’s generation will have.

I’m passionate about getting the message across, so I agreed to become Producer of Reusable Theatre with the main aim of getting other groups to perform the play. I’ve run my first workshop with the K L Settlement Community Centre, where I worked with 40 English as a Second Language (ESL) students. The most important thing is that people are aware of what’s happening and feel empowered to take action, and this play has become a powerful way for me to do that.

Laura Baggaley, the director and writer of This Play Will Solve Climate Change contacted me just after I finished a drama course she had helped to teach. Laura is such a great teacher and director that I leapt at the chance to work with her again. It would be my first fringe show and a chance to find out more about the climate emergency.

The process of making the play was intense; we only had six weeks to create it before its first run. We started by researching the facts, and we experimented with how to share these in an accessible way. We improvised around four characters, developing their personalities, desires and worlds. Laura then wrote the script, which is updated with new environmental and political issues before each run.

To me, climate emergency means that urgent action is needed to save our world. It also means that a different way of thinking and living is required – a way that is more global and kinder to the planet, people and animals. Although I believe in individual action, I also firmly believe that governments and organisations should be fully mobilising to reduce our environmental impact so that the necessary fast results can be obtained.

Research is a dangerous double- edged weapon; it can either fuel your passion for the world or frighten you to the point of giving up. This play has shown me, once more, the strength of theatre. When humanised, every big issue, even the ones the size of the world, are more approachable. With this production, I feel that theatre fulfilled its role as an educational, emotion-binding, motivational medium. It also changed me.

by LAURA BAGGALEY, Writer and Director