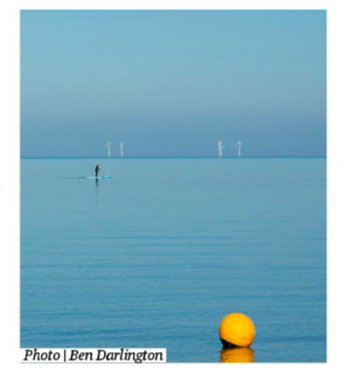 CONNECTING WITH NATURE IN THE CITY

We need to reinvent our relationship with nature for a sustainable future. A new relationship that helps slow climate warming and helps wildlife recover. A closer relationship with nature is for everyone, wherever they live. It doesn’t have to be about trips out into the countryside and it’s not about ‘hugging trees’. More and more people live in urban areas and a connection with nature can be found in towns and cities. A closer relationship with nature is also good for our wellbeing. In an increasingly urbanised world mental health disorders affect 30% of the population, but nature- based solutions for wellbeing are often overlooked. Yet the latest evidence shows that simply noticing urban nature can bring significant improvements in wellbeing. This can be a clinically significant improvement in the quality of life for those living with a mental health difficulty.

There are increasing demands on our attention, so in the Improving Wellbeing through Urban Nature project we used a phone app to prompt people to notice the good things in urban nature. Users were asked to type in a sentence about the good things in nature once a day for seven days. A month later people reported more positive emotions, improved mental wellbeing and were more connected to nature. Those with a closer connection to nature tend to do more for nature and the environment too.

People often wrote about the simple joy of encountering urban wildlife, such as squirrels chasing each other in the park, or the enjoyment of hearing birdsong. We also found that urban parks with more wildlife were linked to higher levels of positive emotions. This shows that more ‘wild’ green spaces that provide better habitat for wildlife can be better for people too.

When writing about the good things in nature, people also noticed street trees swaying in the breeze or lit by the sun. In the city there is always the sky, which is ever changing as clouds pass by. When prompted to take notice of urban nature, people also wrote about flowers and beauty, lakes and rivers and the joy and calm they can bring.

Noticing and benefiting from nature in the city is vital for wider reasons. Wildlife and ecosystems won’t be saved in cities, but they will be saved by the votes, decisions and leadership of those living in the city.

Nature needs to become part of our everyday conversations, as normal as talking about celebrities or football, holidays or work. The nature lover doesn’t need to be out walking the moors, they can be in the park or at the bus stop looking at a tree rather than their phone. So, stop, look, listen and enjoy the good things in urban nature.