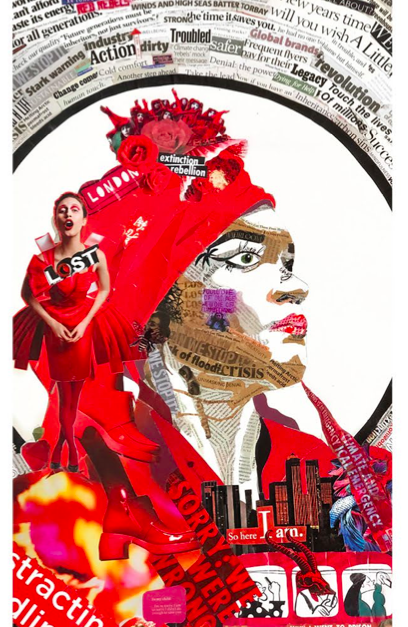 ART IN A TIME OF CRISIS

I study Art & Design at a college in Totnes, Devon, where I have been very lucky to meet some truly inspiring teachers who have developed my understanding that art gives me power; a voice I wouldn’t otherwise have.

I was inspired by several collage artists, particularly Ines Koudis, to produce a large-scale mixed media response, focusing on the iconic and artful Red Rebels. I chose them because they represent an arresting visual symbol for the climate and ecological crisis, whilst recognising the power that art and creativity has within climate action.

The Red Rebels are celebrated as the flowers on the headdress

When composing my work, I combined media from fashion magazines, newspapers and issues of The Hourglass to produce a collage that had a strong ‘pop art’ feel to evoke a strong emotional response. I collected hundreds of poignant words and headlines aimed to highlight the frustration we feel and the urgency of the situation. The headdress suggests a more ethnically diverse image.

The Red Rebels are celebrated as the flowers on the headdress, fashion images depicting their contribution to global warming. I love the cursive words ‘I heal’ of the eyelashes and the apology ‘To my child’. Will my children inherit my failure to act, or will they celebrate a golden era of change?