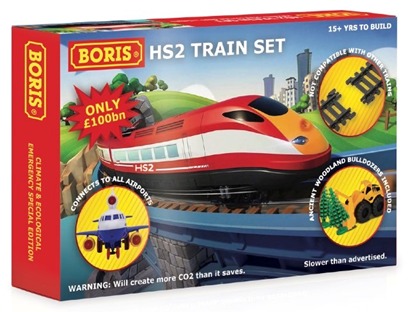 Beginning at College Green in Westminster at 12.15pm, they will relive the spirit of public transport from a Christmas past. The tour will forewarn children of their potential public transport future: a future where over 100 ancient woodlands and hundreds of other wildlife sites could be destroyed to make way for a massively carbon intensive construction project that will enable large-scale airport expansion, better known as the high speed rail project, HS2.

The double decker bus will carry limited edition HS2 TRAIN SET boxes – manufactured by the Prime Minister, Boris Johnson – and costing just £100billion. One of those boxes will be delivered to 10 Downing Street containing a petition on behalf of the #ReThinkHS2 alliance of environmental organisations, who have over 5 million members. Recently, the National Trust has also written to the government with their concerns over HS2.

In addition to the Extinction Rebellion logo, the bus also displays the movement StandForTheTrees.org, whose new Christmas themed film features Annie Lennox (music), Chris Packham (starring) and Emma Thompson (voice). The film launched earlier this week and has already been viewed by half a million people, picking up support from the likes of Stephen Fry and his 12.7million Twitter followers along the way. As a result, Thousands of people have pledged to StandForTheTrees.org and have sent emails to MPs of the new government.

The government are set to make a decision on the future of HS2 very soon.

The protest is calling for a rethink of HS2, especially in the face of the Climate and Environmental Emergency that Parliament declared more than six months ago. HS2 is one of the first projects the government needs to rethink, and redeploy the vast budget into clean transport and infrastructure solutions.

Chris Packham describes the threat of HS2 as: “Catastrophic …. the largest deforestation process that we’ve undertaken in the UK since the first world war, at a time we know we should be reforesting the environment, not taking it down. The wildlife that we’ve got, we should be fighting tooth and nail to protect. These cathedrals of biodiversity cannot be replaced. You can rebuild Notre Dame and it will look pretty much the same, but if you cut these woods down you cannot rebuild them by sticking in a few saplings. Let’s stand for the trees.”

Dr Gail Bradbrook, co-founder of Extinction Rebellion, says, “HS2 is the worst Christmas present the new government could give to our kids in the face of our Climate and Ecological Emergency. Destroying ancient woodlands and countryside to make way for a project that will literally choke us environmentally and economically for decades, to enable airport expansion, is utter madness at this time of extreme urgency. HS2 locks us into the past, with even less chance of a habitable future for our children”.

Journalists are invited to ride along on the bus with Chris Packham, who will also be autographing boxes for those who have been environmentally good this year.

Bus Stops are as following: