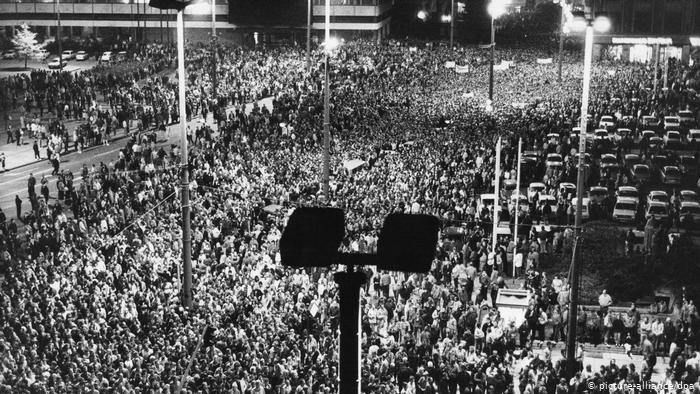 The Peaceful Revolution of 1989 | East Germany

This year saw the 30th anniversary of the fall of the Berlin Wall. This iconic event is often seen as part of a broader world history – the dissolution of the USSR, the opening up of Eastern Europe, the end of the Cold War.

But the fall of the Wall was also the culmination of a vast people-led protest movement in East Germany, a ‘Peaceful Revolution’ that had been growing throughout the 1980’s.

The Socialist Unity Party of Germany (SED) was one of the most repressive and intrusive regimes to ever grace this planet, yet through mass rallies and non-violent direct action, the citizens of East Germany toppled it, set up democratic elections, and reunified Germany.

Even more inspiring is the fact that it was a monthly underground newsletter about environmental issues that became one of the key catalysts of the revolution.

East German industry was polluting the environment on a vast scale, and by the early 1980’s the ecological damage was devastating. On high ground, entire forests were dying due to acid rain, but the SED, ever conscious of its struggling economy, was suppressing all discussions on the subject.

Umweltblätter (Environment Letters) started life in the Zion Church in East Berlin. Churches were the only public institutions free from SED control, and so a rare safe-space for opposition groups to meet and grow.

As a monthly church newsletter centred on environmental issues, with a tiny circulation of 150, Umweltblätter was a semi-legal publication just about tolerated by the state. By 1989 it had a print run in the thousands and was one of the most widely distributed underground journals in East Germany.

The parish rooms where it was printed soon became known as the Environmental Library, a repository of dissident literature where visitors could learn about ecological issues as well as democracy and other taboo subjects in East German society. The Library became a hub for opposition activists from all over the country, its printing press operating around the clock to publish dissident fliers, art, and literature.

Similar libraries started popping up in churches across East Germany, and they became a vital network for coordinating the mass protests that ultimately brought down the SED regime.

When the Environmental Library was eventually raided by the Stasi, the state’s brutal secret police force, the newsletter team were arrested and their printing press impounded.

But the nascent opposition network published a joint protest letter which went around the world via the West German media. Western politicians demanded that the activists be freed, public vigils were set up, and the SED, desperate to preserve the lie that this society was a happy one, was forced to release them – at the time an unprecedented climbdown in the face of public opposition.

With an organised opposition movement now in place, non-violent protests of increasing size started appearing across the country, culminating with a rally in the city of Leipzig of 300,000 people.

The bravery of these people should not be underestimated. The SED had rejected the Western-friendly reforms encouraged by the USSR’s new leader Gorbachev, and had praised the Chinese government’s use of force in the massacre of Tiananmen Square.

There was also the legacy of the spontaneous East Berlin uprising in 1953 where Russian soldiers had shot over a hundred protestors.

Yet the sheer scale of these new protests, and the fact that the Western media was managing to broadcast footage of them, not just to their own audiences but millions of East Germans illegally pirating the signal, resulted in regime paralysis.

The cat was out of the bag and a turning point had been reached. Protest was being tolerated by the SED, and the edifice of its communist dictatorship rapidly crumbled on contact with the genuine anger of its people and their thirst for democratic reforms.

Ultimately, the Peaceful Revolution is not just a brilliant case-study of the awesome power of nonviolent protest, but also of how a dissident environmental movement can lead to seismic social change. We writers of this newsletter truly sit on the shoulders of giants.