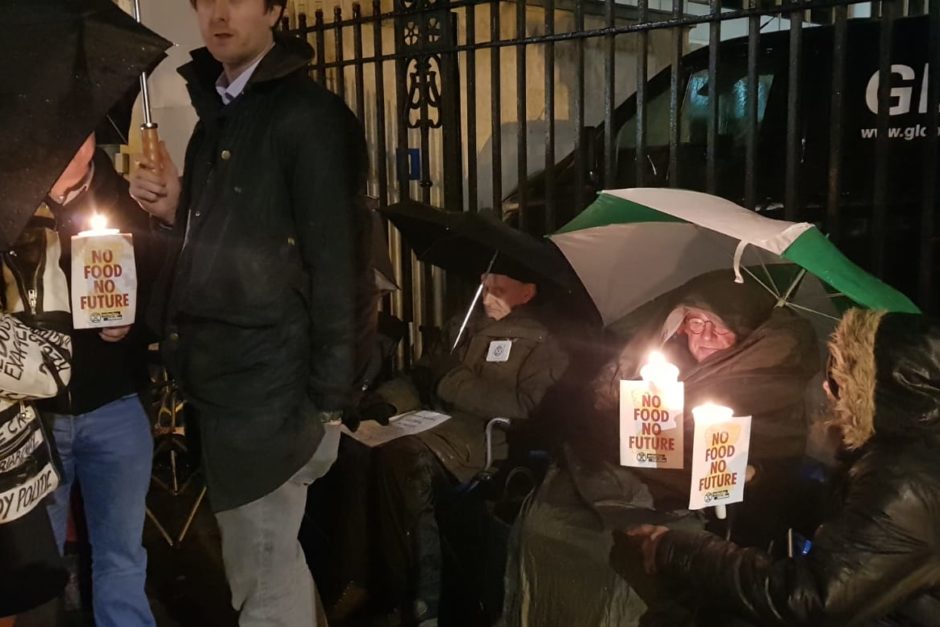 After 26 days, Peter Cole, Marko Stepanov and Julian May have ended their hunger strike, breaking their fast on Election night, Friday 13th December. Surrounded by around thirty members of Extinction Rebellion, the trio watched the re-elected Prime Minister entered CCHQ without so much as a glimmer of recognition for them, as the Conservative leader had regularly passed so unresponsively through the guarded gates before.

“The major thing is psychological,” said 67 year old Marko. “If you know why you’re doing something, it’s not a burden. Hunger ceases after three days. You can’t go running or do heavy exercise… but you can work.”

“I expected to be ignored but it still hurts,” said Marina Tricks, an 18-year-old hunger striker who ended her 14-day fast two weeks ago. “They don’t care about our futures… if they did, they would have said something. All they think about is short term goals and we’ve been fed false promises for so long. We don’t have time for that anymore.”

More than 500 people around the world have refused to eat for a day, a week, or longer, in an attempt to pressure leaders to meet them and adopt their demands for climate action. Angus Rose, a 50-year-old software developer from South Africa, said: “The climate crisis is going to impact all younger and future generations and people of poorer nations. And so when people ask me why I want to hunger strike I say, considering the crisis we’re in, how can I not hunger strike?”

For many of these hunger strikers, this has been the latest act in a string of increasingly desperate attempts to force the government to heed their demands. “This is a method of last resort on the climate and ecological emergency,” said Dr Larch Maxey, “a recovering academic” as he calls himself. “We are trying everything we possibly can and I feel it is absolutely appropriate to use a hunger strike at this time on this issue.”

Aside from encouraging politicians to consider Extinction Rebellion’s Three Demands Bill, the strikers aimed to draw attention to the vulnerability of global food systems, something not easily recognised among the endless aisles of supermarket shelves stocked with an overwhelming abundance of seemingly infinite choice. The UK is a country where 64% of adults are overweight, where food from around the world is available at any hour of the day or night and where no revolution or civil war has uprooted families for centuries, so an illusion of permanent stability has settled in. But the country’s food supply is part of an interconnected global system. Half of all food consumed here is imported from abroad on a ‘just-in-time’ basis where supermarkets stock only enough food for a few days. As the average global temperature rises above 1.5°C, climatic shocks put a heavier burden on agriculture and increase the risk of multiple breadbasket failures that can ripple through the global supply chain. The financial crash of 2008 demonstrates how such knock-on effects occur.

Severe droughts and extreme rainfall are already affecting crop production in the global south. 821 million people go to bed hungry every night and that number is set to rise if we fail to tackle the climate emergency, according to a report released by the UN’s Food and Agricultural Organisation. Perhaps the most horrifying scenario of societal collapse can be seen in Syria, where an intense three-year drought caused agricultural production to collapse, resulting in a mass-migration of people from rural to urban areas, social unrest, rising food prices, government repression and civil war.

“Listen to the science,” Dr Emily Grossman stressed in a speech there three weeks earlier. “And listen to the scientists, who are saying that the climate and ecological emergency is the greatest threat that humanity has ever faced.” With their fear of this impending threat and their love for the humans who will suffer under it, the hunger strikers have packed up their chairs, determined to return to the fight with restored energy and the undying fire of climate justice.

With thanks to Danny Halpin.