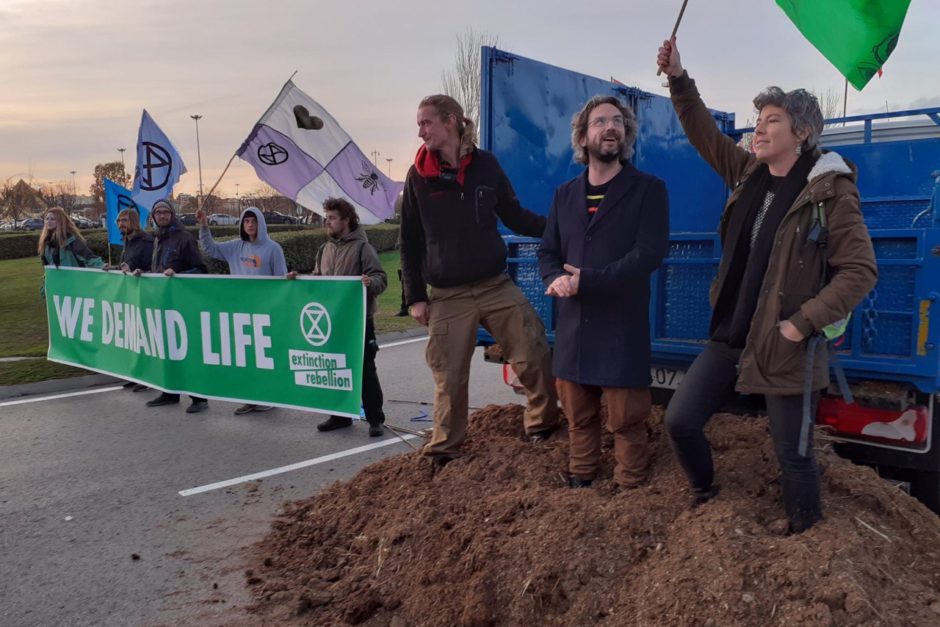 Extinction Rebellion on COP25: ‘What a pile of shite this is’

To mark the end of this year’s COP, Extinction Rebellion has delivered a present to our world leaders who have come here for this most important gathering: a tonne of Madrid’s finest horse manure. Our message to world leaders is this:

The pile of shite is currently on the roundabout just at the entrance to the COP. Shortly after, 12 people stood on 12 blocks of ice with nooses around their necks – symbolising the twelve months that we have left to change trajectory and truly face the reality of the planetary climate and ecological emergency. Extinction Rebellions says:

“Just like rearranging deckchairs on the Titanic, this COP’s fiddling with carbon accounting and negotiating of Article 6, is not commensurate to the planetary emergency we face: those travelling first class are still enjoying the party too much to hear the cries of those already drowning in the decks below.

“Greta Thunberg bravely declared at the beginning of COP, that Fridays for Future has failed. Extinction Rebellion has as well. Emissions continue to rise, keeping us firmly on course for a 4C global temperature rise. We need to come together now and think bigger as we move out of this COP towards 2020 and the next COP in Glasgow.”

Blanca Lagunas from Extinction Rebellion’s International Support Team who has been present at this year’s COP said: “We are in the shit unless we come together, think bigger and transformative. Remember from the most pungent shit, grows the most beautiful roses”

At the same time, Extinction Rebellion is releasing some important private communication that it has had with Professor Johan Rockstrom, the top climate scientist. Rockstrom said publicly on Sunday that “There is a risk of disappointment in the UN process because of the inability to recognise that there is an emergency [1]”, and has separately written to Extinction Rebellion to confirm that the world remains on course towards the loss of billions of human lives:

“a 4 C world will not, as far as we know today, be able to accommodate an 8 billion world (i.e., our current population of 7.7, rounded to eight), or maybe not even half of that (my judgment). This is, in my assessment, a reasonable (but still disastrous and dramatic) outcome, i.e., that we are moving towards a climate state that could not accommodate today’s population, much less a 10 billion population, and which may cut population down dramatically from current totals.”

NB. We asked whether we could make this information public, a joint announcement, as we feel it is of the utmost importance that if scientists are thinking this and talking about it the world needs to know and talk about it too – however the offer was declined. Therefore given the lack of discussion about this, we feel we have no other choice than to make this information public at this time – people need to know the truth.

Blanca Lagunas added: “2020 is the pivotal year for how we face the climate and ecological emergency. We do not yet have the privilege of 2020 hindsight. What the world does in the next twelve months will affect the course of humanity. Tipping points are already being crossed, we need the international community to come together – like never before – and make the impossible possible.”

On the COP process

Miguel Rodríguez, a spokesperson for Extinction Rebellion said: “In 2015, Governments agreed we aim to limit global warming at 1.5˚C.  Since then the IPCC has confirmed the dire consequences, for all of us, if we don’t succeed. Yet after 25 years of COP talking-shops global emissions continue to rise. Millions of people have been displaced from their homes and countless have lost their lives. We remain on track for 4˚C warming, which would mean billions of us would die.

“Unless our Governments start to tell the truth, and begin to work with us, instead of against us, the social contract will remain broken, and the legitimacy of the COP process with it. We have no ethical choice but to unite in non-violent civil disobedience and rebuild our fracturing world.”

“Extinction Rebellion’s national demands have helped to change the conversation around the world already, so that people are talking and thinking about what is possible by 2025, rather than 2050,” said Sam Smithson of Extinction Rebellion UK.

“Now is the time to think global – and Extinction Rebellion is thinking we need a ten year plan globally. These global demands are intended to open up the necessary conversation now, they are an offering to the world and we look forward to getting your feedback so that as we move beyond this COP to 2020 looking to Glasgow next year, together we can literally change what is possible in this world.”