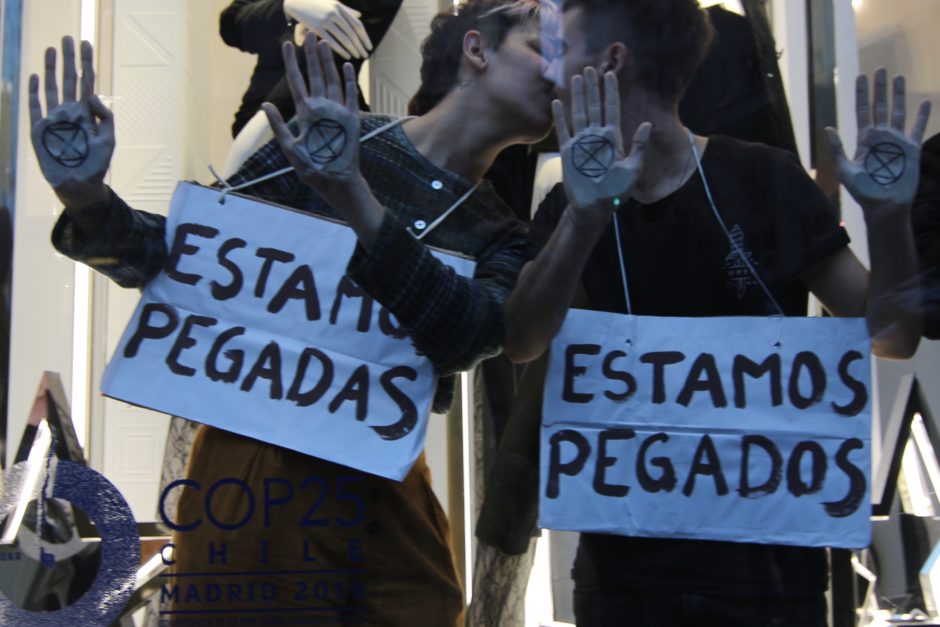 Raquel and Sergio stood with their hands glued to the inside of Zara’s display window kissing silently and smiling, with adrenaline, fear and love coursing between their lips. The cameras and curious eyes of hundreds of Christmas shoppers watched their intimacy from the other side of the glass, attracted by the rebels outside who were singing and shouting, with banners in their hands and rage in their hearts. From that perspective, the couple appeared to be holding a gesture of surrender. Hands up! Don’t move! It was a position of vulnerability that became clear when the Policía Nacional came to remove them.

No XR rebel had ever glued-on before in Spain and it was uncertain how the police would react. It was expected that they would place a barrier between the window and the public, but after sealing the store and assessing the situation, the officers yanked away the couple in full view of everyone outside, ripping their hands off the window like an unmerciful wax beautician before releasing them through a side door into the cold rain where a crowd of jubilant rebels were waiting with song and applause.

Extinction Rebellion is more than an activist group. It is a community. And, like any other, it is formed through the coming together of people with a common purpose and the transformation of place: the building of a site, the removal of traffic, the covering of blank walls with posters and the filling of silent halls with music and laughter and planning. Calle de Hortaleza, like Marble Arch and Trafalgar Square before it, has been repurposed, remodelled, recoloured and reimagined and that name will rest in the memories of everyone who has resided there for the rest of their lives. It is a community born from the fertile earth, flowering in the brief summer before releasing its seeds to far and foreign lands.

The night following the Zara action the main hall, named Amazonas, was cleared out and training for the next day began. Instructions shouted in Spanish and English – right foot forward, left foot back, hips turn, arms up – coordinated the rebels to dance synchronistically with the music of The Bee Gees. They were training for Discobedience, a flash-mob dance troupe that would return to Gran Vía two days later to block Madrid’s most commercial high street and dance in the Saturday afternoon sunshine to the tune of Staying Alive. There have been actions every day bar one since the COP25 began, with different targets and themes, from the celebratory Discobedience to the sombre Marcha de los Mares Muertos.

The energy in the centre on Calle de Hortaleza is spontaneous and colourful, a marked difference from the cold formalities and the fake slogans inside the UN conference hall. The building itself resembles a colossal airport hanger and each country has its own pavilion where they attempt to project an image of desirable eco-friendliness to potential investors. Indonesia’s pavilion is draped in warm patterns and shafts of bamboo while huge photographs of deep-green rainforests and shadowy mountains of mist adorn the walls. Indonesia has one of the highest rates of deforestation of any country in the world. The UK, which gives out more than £10bn of fossil fuel subsidies a year, has the words Green Is Great plastered over 20-foot tall photographs of wind turbines.

The politicians who have flown in from some of the most polluting countries on earth pat each other on the back for simply arriving. They casually admit their wrongful inaction on tackling the climate and ecological emergency as if they have forgotten to do the dishes, while praising young people for reminding them of their duties. The same young people who are screaming with rage on the streets outside.

Possessors of power as energy are as reluctant to change as the politically powerful. Spain’s largest corporate polluter of greenhouse gases, responsible for over 9% of the country’s emissions, is a diamond sponsor of the conference and on the opening day it bought wraparound adverts on all of the major Spanish newspapers, commending its leadership on clean energy solutions. The company was duly targeted by Extinction Rebellion for its brazen attempts at greenwashing.

The actions in Madrid have been the first time that XR groups from across Europe have worked together in such a way. The movement is becoming truly international. Rebels are sharing skills, experiences and contacts that they will take back with them and use like fertiliser to keep the living organism that is Extinction Rebellion growing, breathing, reproducing, moving with its own cycle of seasons.

Only by shedding our hubris and facing our vulnerability can we overcome the greatest challenge our civilisation has ever faced. It takes courage to admit our weaknesses. The same courage that Raquel and Sergio mustered when they glued their open palms to Zara’s window and waited for armed police to remove them.