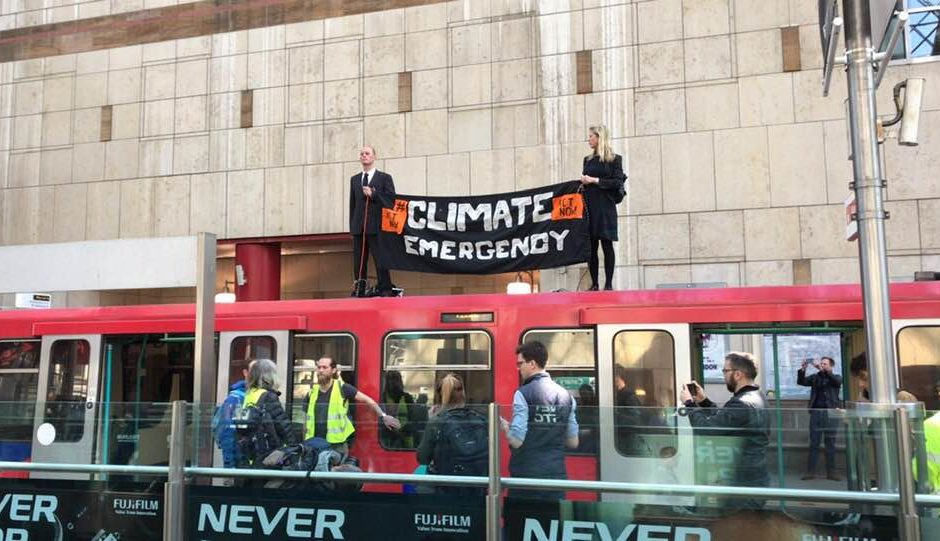 Cathy Eastburn, Mark Ovland and Luke Watson are the first members of Extinction Rebellion to have their cases heard before a jury of fellow citizens, rather than in a Magistrate’s court where judges sit alone.

During the action at Canary Wharf station on April 17th , Cathy and Luke climbed on top of the train and held a banner that read ‘Climate Emergency’, while Mark glued himself to the outside. All three are charged with obstructing an engine or carriage by an unlawful act, contrary to Section 36 of the Malicious Damage Act 1861.

The trial is scheduled to last a week with the verdict expected on Friday.

Cathy Eastburn, 52, a musician and mother from London said: “As things stand, my children face an unimaginably bleak future, and that goes for all children alive today. I acted out of terror, desperation, and fierce love for my children and for all children – to sound a powerful alarm, to draw attention to the climate emergency and to try and inspire action from our government.

“While I’m very nervous about being in the Crown Court, I welcome the opportunity to be tried by my fellow citizens and hope they will understand why I needed to act as I did.”

The other two defendants are Mark Ovland, 36, a full time activist from Somerset and Luke Watson, 29, a philosophy student from Essex.