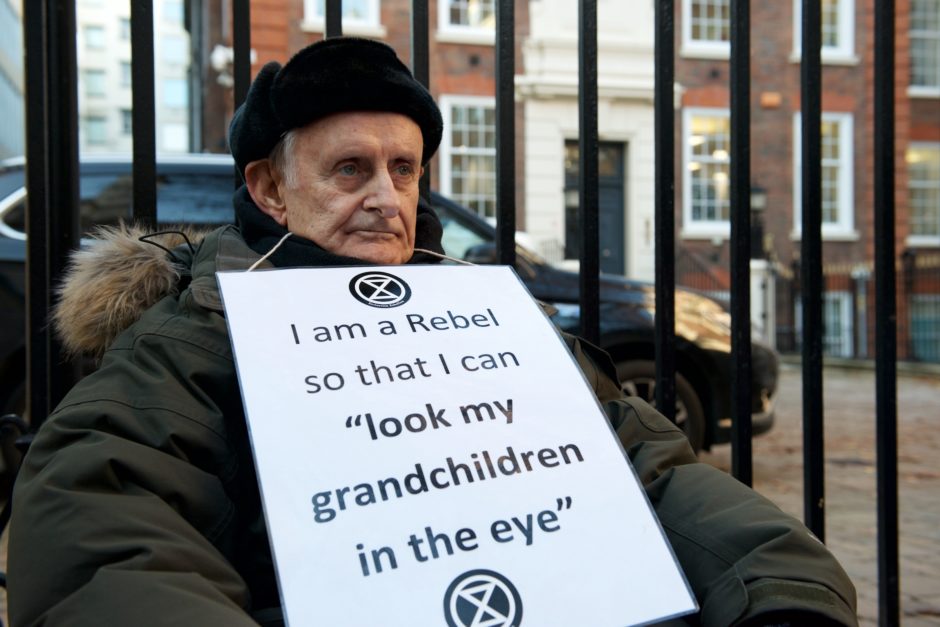 The General Election is here and as people flood to the polls to cast their vote, Extinction Rebellion Hunger Strikers remain outside party headquarters in London to demand party leaders meet with them.

Leaders of the three main parties – the Conservatives, the Labour Party and the Liberal Democrats – are yet to meet with hunger strikers, now on their 25th day without food.

As a last push to urge a meeting to discuss the Climate and Ecological Emergency and Extinction Rebellion’s Three Demands Bill, two hunger strikers, Peter Cole, 76, and Marko Stephanov, 67 (both grandparents), plan to remain outside the Conservative Party HQ overnight tonight, to wait for the election results to come in.

More than 200 candidates have now signed the Three Demands Bill. In support of the hunger strikers and the bill, over 20 celebrities and notable people have co-signed a letter calling on leaders to meet the strikers.

Please find the letter in full below.

We urge you in the name of all that is honourable and good to meet with Extinction Rebellion’s Hunger Strikers before they complete four weeks on hunger strike, with grave risks to their health and lives.

The brave strikers first wrote to you on 14th November asking for a meeting to discuss the Climate and Ecological Emergency Bill: a piece of legislation which exists – is “oven-ready” – and addresses the greatest threat humanity has ever faced. More than 215 candidates from your parties (13 parties in total) have pledged their support for the Bill, so to not meet with hunger strikers is immoral and bizarre.

In their letter they set out their intention to hunger strike outside your party head office until you meet them because this Emergency is so very urgent – so urgent that Parliament declared an Climate and Environmental Emergency on 1st May and gave itself 6 months to act. That 6 month deadline came and went without any commensurate action. This Bill is an appropriate response to that inaction and requires your attention.

True to their word, since 18th November Hunger Strikers have indeed sat outside your offices every day asking for this meeting. The Emergency cannot be ignored, and neither can they.

In a democracy – and in an election period – it is right and proper that the leaders of parties seeking to govern us should be accountable, responsive and transparent.

We appreciate that you are busy but their request is for just one hour, at the time and location you choose, to discuss this Bill.

The science is clear: we must act decisively and swiftly. The UN Secretary General has said we have just 12 months to turn emissions around. Business as usual means death, we are on course for societal collapse due to failed harvests. This #ClimateElection will select the government which must tackle the Emergency.

Polls show that most votes will be influenced by parties’ responses to the climate and ecological emergency, with 85% of voters concerned about climate change and 52% very concerned (Ipsos Mori Aug 2019).

So we urge you to meet them.

Who forms the next government is critical to our chances of mitigating the worst effects of this emergency and building resilience for our communities. We are vulnerable to the effects of the crisis now. Whether it’s the threat of food shortages, overburdened public services or extreme weather, by the next election the climate and ecological emergency will be impossible to ignore.