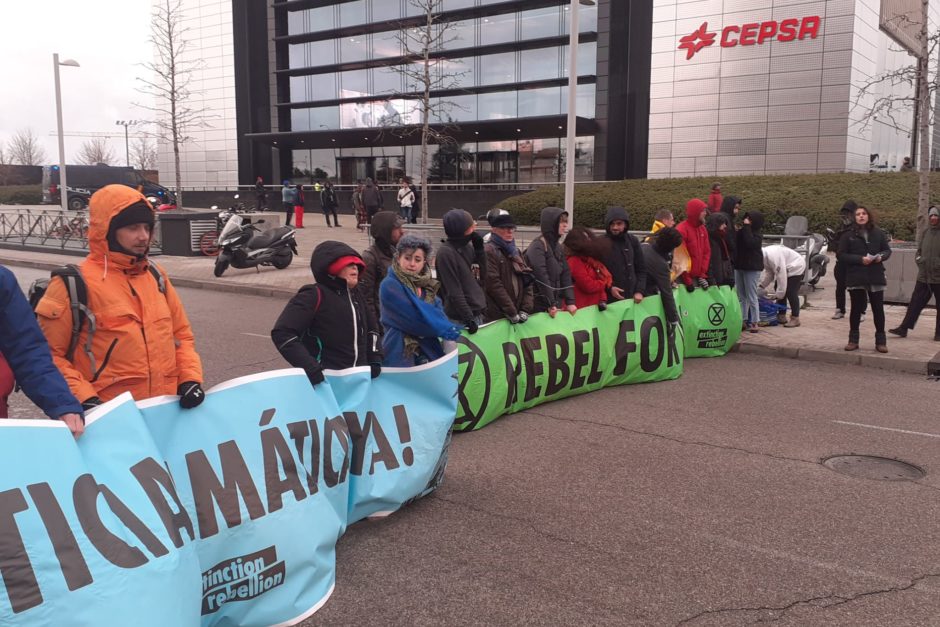 BREAKING COP25: Extinction Rebellion vomits up oil at CEPSA – ‘the world is getting sick, we need to put people before profit’

12 December 2019, Madrid, Spain – Extinction Rebellion’s Rebels without Borders have today swarmed CEPSA (Torre Cepsa, Paseo de la Castellana, 259, A, 28046 Madrid) as well as occupying the foyer dressed in business suits – representing the obsession with oil and gas profits – and vomiting up oil inside.

“Our world is sick due to our addiction to fossil fuels, and rather than things getting better under the COP process – whose credibility is hanging by a thread – things are getting worse, devastation is accelerating,” said Blanca Laguna of Extinction Rebellion.

Rebels demand that governments and attendees of COP25, Act Now to hold major fossil fuel companies accountable for more than 40 years of climate and ecological destruction and deception.

“We are literally sick of the fossil fuel companies and executives who continue to exploit the world’s oil, gas and coal reserves, knowingly feeding and encouraging an addiction that is taking humanity over a cliff. We know that we all can do better than this. We have to.”

CEPSA is targeted for this action as a key player in the fossil fuel industry which is driving the climate and ecological emergency which threatens the future of humanity and our home. IT is the largest oil company in the state, and holds the record of being one of the 10 most polluting and devastating companies in Spain, with operations that are expanding despite being aware of the industry’s devastating impact on the planet.

This year, COP25 in Madrid has been bankrolled by some of the biggest polluters trying to establish clever ways to avoid responsibility through carbon accounting trickery. Also, these companies are ignoring the scientific consensus which calls for urgent transition from exploration and production of fossil fuels to renewable and alternative technologies.

In addition to their climate and ecological damage, CEPSA has recently been found to be violating Indigenous rights in Peru, particularly Indigenous women are bare the brunt of the worst impacts as they are putting profit before people. We stand with Indigenous communities to demand Climate Justice Now.