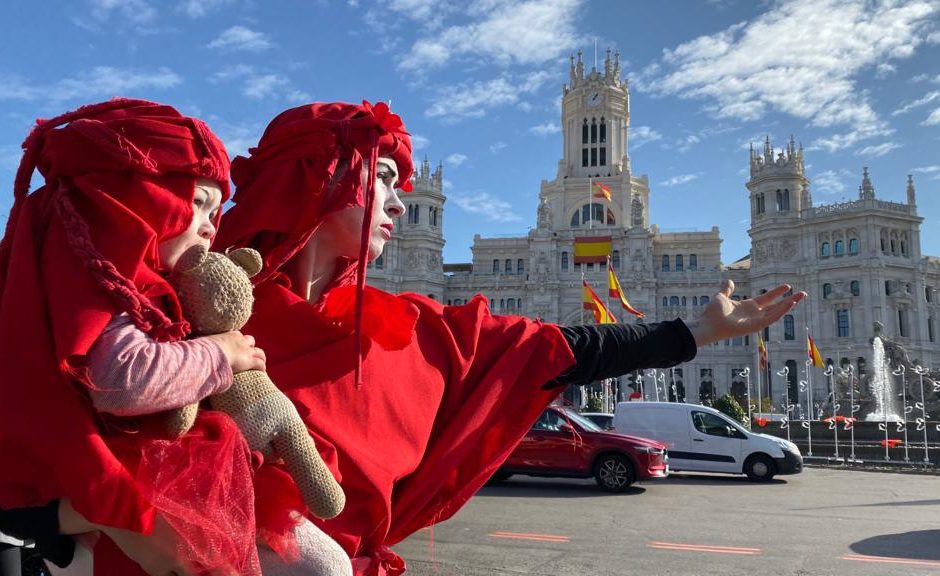 The world is in a state of crisis and Extinction Rebellon artists have been busy communication the emergency in visual terms. No boundaries, hundreds of singers, performers, actors and painters never miss an opportunity in both cities. Members of the public have reacted with laughter, intrigue and amusement when witnessing such unexpected actions. It is the power of the Arts.

Enjambre Sonoro (Sound Swarm) performance became one of the highlights at the Madrid demonstration that took place last Friday the 6th of December. Enjambre Sonoro is a collaboration between the Barcelona based collective Enmedio, Filastine and Extinction Rebellion. The performers achieved to reach of level of energy, dematerialising the bodies and expressing a powerful emotion: anger. Invading spaces supposed to belong to the audience in unexpected fast movements and stopping in a die in after an eclectic recollection of sounds left none indiferent. A transformative experience.

As Leo Martin, a co-founder of Enmedio collective, say: “We thought there was more time, or that climate change would somehow be resolved by experts with technological magic, but no. Right now, with the 6th mass extinction looming on the horizon, we continue the same orgy of consumerism that provoked this crisis. We are heading to Madrid to conjure up our particular potion of resistance to this march towards death. An acoustic and visual experiment that, if successful, should help us occupy our bodies, rediscover the shape of our skulls and re-inhabit our skeletons skeleton, while giving a shout-out to endangered species and the sacred art of life itself.”

You can see the video here https://drive.google.com/file/d/1XY8tvJDVzHg238AvuRCxwKbvtbwC69pM/view?usp=drivesdk

The Red Rebel Brigade, founded by Doug Francisco from the Invisible Theatre, has grown to become a global action. Doug says: “It’s the most powerful thing I have ever said …. without speaking! Art can send a powerful message and when it resonates it connects with us in a much more powerful and profound way way than words, in my opinion. Words have there own magic but eyes are the gateway to the soul they say, so when we see something and it touches us we really feel it, music has a similar but different quality also. Many people have simply taken the initiative, we released ‘how to’ videos on my Doug Francisco Youtube channel and started an – XR Invisible theatre Red Rebel Brigades facebook page, which now has nearly 4000 members.”

#PaintTheStreets is an ongoing creative campaign, bringing posters, stickers, murals and beautiful artwork to the streets to raise awareness about the climate and ecological emergency. The aim is to hit the streets to #TellTheTruth and encourage all the political candidates to support the #ThreeDemandsBill and agree to a Citizens’ Assembly.

Wildlife biologist Iggy Fox, 25, from London, says: “I’m tired of governments and the mainstream media failing to warn us about how bad this crisis is, and ignoring the environmental catastrophes devastating poorer countries. To top it off, advertisers fill our brains with junk to convince us to buy more useless stuff and make the whole problem worse. If these institutions won’t tell the truth to the public, the Rebellion will.”

Food shortages, water shortages, long queues to breathe bottled fresh air – welcome to a new reality brought to you by Extinction Rebellion Theatre. The intention is to put the climate and ecological crisis centre stage by connecting the present day to the near-future realities predicted if urgent action is not taken. These performances are an emotionally disturbing look at how we respond to one another in crisis.

Rob Callender, one of the participants, comments: “Every day from the 1st to the 12th of December, Extinction Rebellion Theatre will appear in locations around London and in cities across the UK. We will depict scenarios from a near future that studies have predicted for our if climate breakdown continues and continues to accelerate. These scenarios already exist in the global south and we do it to provoke empathy and feelings of solidarity, so, a reappraisal of what is necessary to have around Christmas.

We will look at rationing of food and water. We will look at air pollution. We do this to examine how people react to scarcity and vulnerability. We hope to disturb the emotions of our spectators and provoke them to enter the show. The model is ‘Forum’ Theatre. The oppression we depict stems from the situation and the situation occurs in the future due to climate breakdown but the remedy occurs in the present before our rehearsal becomes a reality.

We ask for empathy. We ask to sign the three demands bill. We ask for the government to be led by a Citizen’s Assembly. Now.”

With just over a week until the UK goes to the polls, Extinction Rebellion bees were buzzing around campaign buses and demanding the climate and ecological emergency is top of the agenda this election.

The protest, going by the name ‘Bee-yond Politics’, is being carried out to remind politicians of the irreplaceable biodiversity loss that is a direct result of their poor, irresponsible policy making. Activists wanted to plant the plight of bees and other pollinators fully in the minds of the next Prime Minister, and to remind them that they hold the future of life in their hands. Our bee population is being threatened by extreme weather and habitat destruction, bringing with it crop instability and food vulnerability.

Drawing by Maria Hayes, 12 Days of Crisis Sing Along video in collaboration with Neil Browning

The 12 Days of Crisis – Sing Along is a collaboration between two artists. Lyrics, musical arrangement, and recording by Neil Browning and the Artwork & video production by Maria Hayes.

Neil comments: “As a musician, it was obvious to me that a special version of the song should be made to accompany the XR actions, and aid publicity. The reaction so far has been 100% positive! I was particularly touched when Maria told me of a friend of hers in Leicester who had watched it with her two sons, and said she was in tears by the fifth verse.”

Maria adds: “Neil put a call out for help with a video for his song and I offered to help. I just started drawing and they flowed. Initially Neil just wanted the words for the final child’s question, but when I tried that I felt it disconnected the viewer, so created another drawing. The song form suggested how it should all fit together. It all had to come together quickly, which required long hours. As creatives, once we get the bit between our teeth, we work at it until it’s done. It was a pleasure to work with Neil. No ego, but plenty of professional pride. That’s great because then the work leads the project. The subject matter really matters, so I am honoured to be able to use my skills in this way. I hope this video spreads the message as widely as possible.”

You can see the video here https://www.youtube.com/watch?v=8GZF9WdGZ3Q