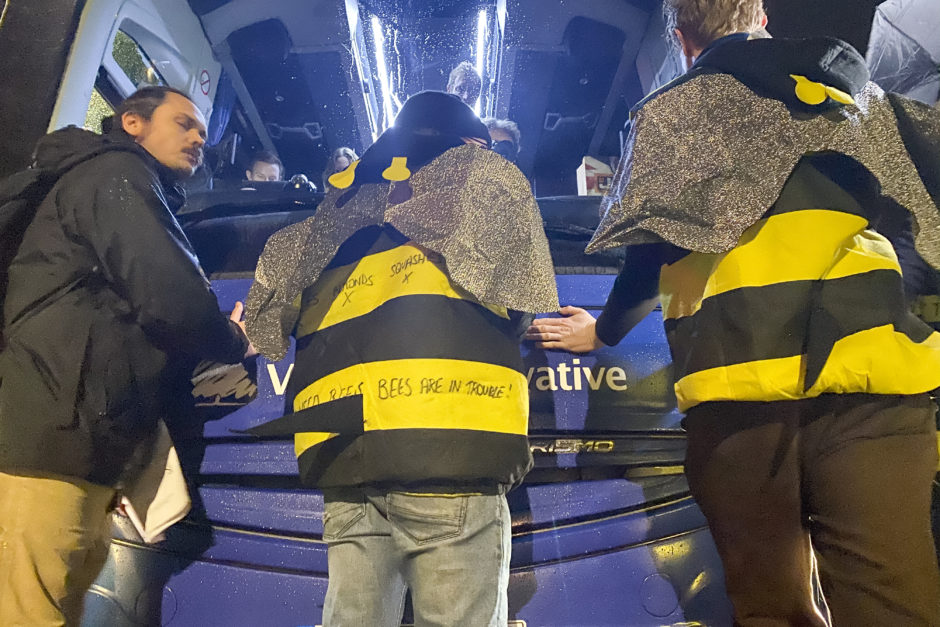 BREAKING: Extinction Rebellion UK glue themselves to Tory battle bus and ask the Conservative Government “Where have you been?” this #ClimateElection

Extinction Rebellion UK are in Staffordshire today buzzing around the Prime Minister and asking why his Conservative Government are refusing to answer questions about the climate and ecological emergency.

Currently 8 people – 5 of them dressed as bees as part of our ‘Bee-yond Politics’ actions – are blocking the Conservative battle bus, with 3 people glued to the bus at the JCB factory in Burton, Staffordshire. Despite heavy rainfall, Extinction Rebellion activists are asking: Where has the government been hiding this #ClimateElection?

In this election campaign, the Conservative and Brexit parties have been equally absent from the climate debate: refusing to meet with Extinction Rebellion hunger strikers sitting outside the Conservative HQs – now on their twenty-third day without food – and not attending climate hustings. To date, Conservative parliamentary candidates have declined 70 invitations to attend Climate Hustings (including Boris Johnson avoiding the Channel 4 climate debate, and the Science Minister, Chris Skidmore, failing to show up in his constituency of Kingswood).

James Moulding of Extinction Rebellion’s Political Circle, says: “So far during the General Election campaign, the current Conservative government has refused to engage in the climate debate. There is an evident theme taking place, with the Prime Minister repeatedly avoiding difficult conversations around this issue. We cannot allow the current governing party to continue to ignore the most pressing crisis of our time.”

Our current government is failing to meet both the current challenge of the ecological emergency and to prevent future disaster. Extinction Rebellion does not endorse candidates or parties, but we call out reckless inaction when we see it. The track record of the Conservative government speaks for itself, with Conservative MPs five times more likely to vote against climate action. With the Government backtracking on climate-positive decisions such as cancelling fracking, and research showing that supporters of climate science denial donate predominantly to the Conservative Party and Tory politicians, we demand they answer voters questions about the most pressing issue of our time. [1][2]

Last week, Extinction Rebellion bees from around the UK managed to splat 3 party battle buses – The Liberal Democrats, the Labour Party and the Brexit Party. However, regardless of careful research, we have struggled to find the Conservative bus…until now. It turns out any careful search by road has been in vain as the Prime Minister has been travelling the country in private jets, throwing our mission off course! [3]

And now, as Extinction Rebellion continues buzzing around the campaign trail in search of answers, the question remains: why have the Government been hiding from this issue?

Bethany Mogie of Extinction Rebellion UK says: “No one can hide from the Climate and Ecological Emergency forever. As towns in Yorkshire and the Midlands are devastated by flooding, and dangerous levels of air pollution in our cities remain a serious health risk, it is only right to ask the Conservative Party what their plan is to avert this disaster. If they are not willing to engage with this debate now then why should we expect them to if re-elected on Thursday?”

During their 12 Days of Crisis, Extinction Rebellion UK have been urging all candidates to sign up to the Three Demands Bill and prove to the public that the climate and ecological emergency is the top priority this election. Of the 100 who have signed up so far, only one is from the Conservative Party. [4]

Who forms the next government is critical to our chances of mitigating the worst effects of this emergency and building resilience for our communities. We are vulnerable to the effects of the crisis now. Whether it’s the threat of food shortages, overburdened public services or extreme weather, by the next election the climate and ecological emergency will be impossible to ignore. After nine years of burying their heads in the sand about the issue, we must make the Conservatives engage NOW.

[1] The 9 green policies killed off by the Tory Government: https://www.theguardian.com/environment/2015/jul/24/the-9-green-policies-killed-off-by-tory-government?CMP=share_btn_fb&fbclid=IwAR2IVmTisgdKQ2uQ-xxrwJOQPlyOANFB_T09TGNGKkF-wRfwfh5eJouYAic

[4] The Election Rebellion is calling for all UK political parties and Parliamentary Candidates to support the Climate and Ecological Emergency Bill (better known as the Three Demands Bill), and do all in their power to ensure it becomes law. The Bill calls for the following: