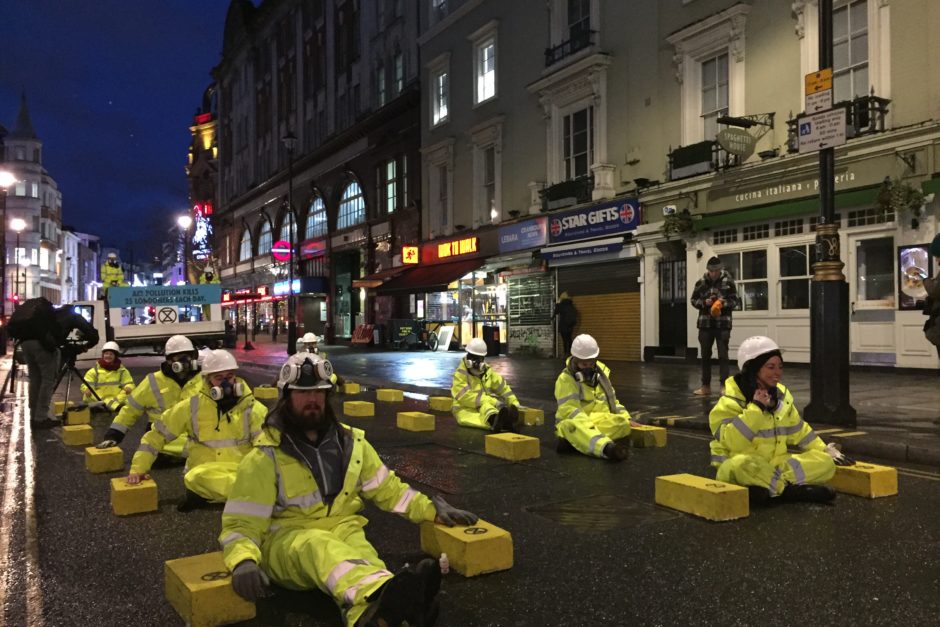 Extinction Rebellion have blocked Cranbourne Street outside Leicester Square Station in central London. The road has been chosen for it’s dangerously high levels of air pollution. Extinction Rebellion are demanding action from the next government, following this Thursday’s general election, on deadly levels of air pollution in the UK. The action is part of the Election Rebellion and seeks to place the climate and ecological emergency at the top of the agenda for all political parties. [1] Parallel actions are taking place in Manchester, Weymouth, Yeovil and York.

The roadblock in central London is emblazoned with the words ‘air pollution kills 25 Londoners a day’ and twenty-five breeze blocks – symbolic of those who lose their lives each day – have been glued to the road [2]. Six people have glued onto the breeze blocks.

Extinction Rebellion spokesperson and teacher, Rosamund Frost, said: “We are here demanding action on illegal levels of toxic air in our communities, our schools and our streets.

“In February 2017, the European Commission issued a ‘final warning’ to the UK over illegal levels of air pollution. In May that year, after the government failed to take decisive action, they were taken to Europe’s highest court, the European court of justice.

“The government have neglected to tackle fatal levels of air pollution. How can we put our trust in them to address the broader climate and ecological emergency?”

Extinction Rebellion hunger strikers remain outside Political Party headquarters in Westminster as they enter the fourth week of their strike. Peter Cole, a 76 year-old grandfather, is one of those now on their twenty second day without food.

Peter said: “As an emeritus professor of respiratory medicine, I am well aware of the facts about air pollution and am deeply concerned that, unless we act now on the climate emergency, the lung damage that is already apparent in children in many parts of the UK will condemn them to ongoing and possibly fatal lung disease as they grow up.”

Peter and fellow hunger striker Marko Stepanov have sent a letter to Boris Johnson inviting him to discuss the climate and ecological emergency with them at midday today [3].

The hunger strikers are asking all party leaders to meet them to discuss their support for the Climate and Ecological Emergency Bill, known as the Three Demands Bill. They have met with Deputy leaders of Labour and the Liberal Democrats and had a one-hour meeting with the deputy leader and other senior members of the Green Party, but are still waiting to meet the party leaders.

Plaid Cymru’s Adam Price is the first leader to have met with them to discuss supporting the bill. The Conservatives have not engaged at all during the three weeks hunger strikers have been outside their headquarters in Westminster.

[1] The Election Rebellion is calling for all UK political parties and Parliamentary Candidates to support the Climate and Ecological Emergency Bill (better known as the Three Demands Bill), and do all in their power to ensure it becomes law. The Bill calls for the following:

[2] King’s College London report on mortality burden of NO2 and PM2.5 in London. https://www.london.gov.uk/sites/default/files/hiainlondon_kingsreport_14072015_final.pdf

As you may be aware, we have been on hunger strike outside the Conservative Party HQ for 19 days now. We are both grandfathers who feel we have no option but to take this drastic action to highlight the gravity of the climate and ecological catastrophe that we are all facing. We are doing this so that we can look our grandchildren in the eye.

We are very disappointed that neither you nor any of your colleagues has taken the time to come and speak with us.

We have invited the media to come and visit us at 12 o’clock on Monday, 9 December and would like to invite you to come and speak with us for a few minutes about our concerns, simply as a fellow human being who breathes the same air.

By Monday we will be on day 22 of our hunger strike.