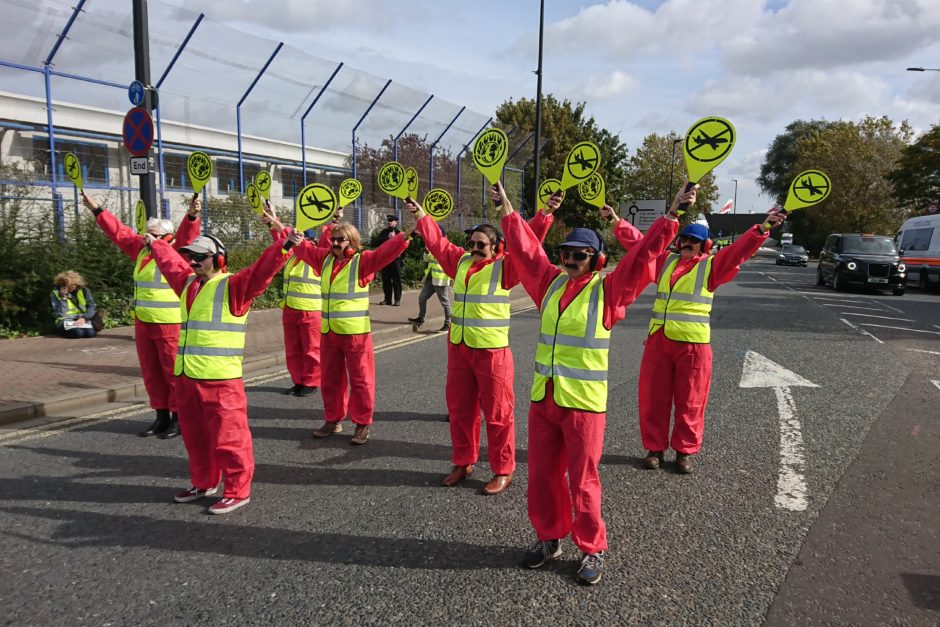 As the General Election draws near, Extinction Rebellion will be heading to Heathrow on Sunday to continue their 12 Days of Crisis, calling on all candidates to prioritise the Climate and Ecological Emergency this election and sign up to the Three Demands Bill.[1]

At 10am on Sunday 8th December, a critical mass of cyclists will gather at Hyde Park Corner and ride to Heathrow, blocking the road along the way. At the airport a bulldozer will join the cyclists on Bath Road, above the Tunnel Road roundabout, at 1.30pm to perform a “Bulldozer lie-in” and act out the future destruction bulldozers will cause when they begin building the controversial Third Runway. Find out more here.

Both the Prime Minister, Boris Johnson, and Shadow Chancellor, John Mcdonnell, have been invited to attend the protest, among other politicians.[2] In 2015 when Boris Johnson was first elected as MP for Uxbridge (a constituency local to Heathrow), he promised he would “join John McDonnell in lying in front of the bulldozers” if the expansion of Heathrow goes ahead. These politicians have been invited to stand by their promises and join Extinction Rebellion and local community activists opposed to the runway, and lie down in front of the bulldozer in symbolic opposition.

Local anti-Heathrow campaigner Christine Taylor, says: “Residents in villages to the north of Heathrow have repeatedly faced the destruction of their communities by a proposed third runway. Now, with communities around the world suffering the effects of climate change, it’s time to scrap the runway and cancel the bulldozers once and for all.”

Heathrow’s third runway is one of the hottest battlegrounds in the UK’s fight to tackle the climate and ecological emergency. Even with the Government’s controversial target of reaching net zero carbon emissions by 2050, the building of a third runway is incompatible with reaching it. UK Aviation currently equates to 6% of total UK emissions and is forecast to be 25% of emissions by 2050 at current growth.[3]

Kevin Anderson, Professor of Energy and Climate Change at Manchester University, says: “At every level, expanding Heathrow flies in the face of any scientific, mathematical and moral interpretation of our Paris commitments. The strong support by many politicians for the expansion demonstrates just how thin their veil of concern is for our own children’s prospects as well as the lives of poorer and more climatically-vulnerable communities. Set against this failure of integrity and strategic leadership, it is imperative that civil society steps up to fill the vacuum left by those purporting to be in charge.

Democracy is a partnership between top-down and bottom-up. With the former abdicating its climate responsibilities, it is left to the latter to counter those hell-bent on bulldozing the Paris Agreement into oblivion. This is the twenty-first century, yet too many of our leaders still remain wedded to the previous fossil-fuelled millennium.”

Regardless of where your vote falls this election or how green a manifesto may look, Extinction Rebellion UK demands more from every candidate. All the main parties have shown that they are not up to the climate challenge we face. To a greater or lesser extent, they are rearranging the deckchairs on the Titanic.

While the Liberal Democrats commit to a dismal net zero carbon emissions by 2045 and the Labour Party backtrack on their commitment to net zero by 2030, the track record of our current government speaks for itself, with members of the Conservative Government five times more likely to vote against climate action.

There is an evident theme taking place, with the Prime Minister repeatedly avoiding difficult conversations around this issue. He declined to join the climate debate on Channel 4 last week and has still has not spoken with climate hunger strikers sitting outside party headquarters in London, who will be on their 21st day without food on Sunday. If the Prime Minister were at all serious about the climate crisis then he should commit to his promise and cancel the third runway immediately if he retakes office next week.

[1] The Election Rebellion is calling for all UK political parties and Parliamentary Candidates to support the Climate and Ecological Emergency Bill (better known as the Three Demands Bill), and do all in their power to ensure it becomes law. The Bill calls for the following:

Invitation to lie in front of a Bulldozer outside Heathrow Airport:

In your victory speech on General Election night in 2015, you memorably promised your constituents who had elected you as MP for Uxbridge and South Ruislip that you would join John McDonnell and “lie down in front of those bulldozers and stop the construction of that third runway” at Heathrow Airport.

Extinction Rebellion applauds your commitment to take action to avert a project that would otherwise fatally undermine the Conservative Party’s commitments to tackle the climate emergency.

As two leading politicians who both represent constituencies close to Heathrow, Extinction Rebellion therefore invites both yourself and John McDonnell to join us in lying down in front of a bulldozer, as part of a family-friendly rally just outside Heathrow Airport on the afternoon of Sunday 8th December.  Some of the participants will arrive in a cycling convoy from central London, with pick-up points along the route, others will come by public transport, including from the local communities around Heathrow.

The ‘lie-in’ itself will take place that afternoon at 1.30pm, next to the model Airbus in the centre of the roundabout on Tunnel Road (i.e. the northern entrance to Heathrow which leads to Terminals 2 and 3).  The police have been advised of our plans and we are confident that they will be happy to facilitate them.

Should your pre-election diary preclude your attendance, we would welcome a statement of support, confirming your continued commitment to ensure that the expansion of Heathrow Airport would be cancelled if you are returned as Prime Minister.

We look forward to your response

James Moulding
On behalf of the Extinction Rebellion Political Circle