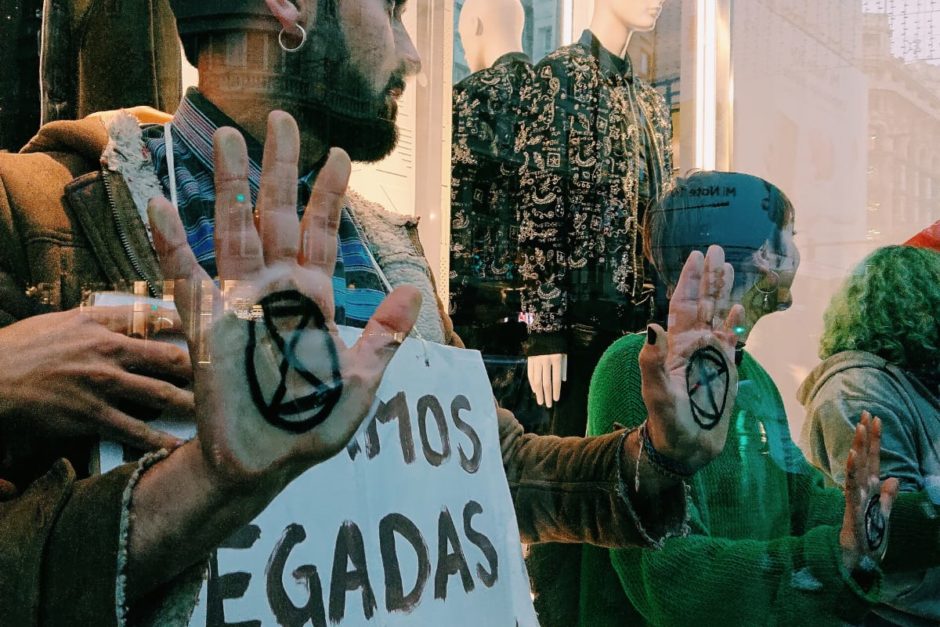 Around 30 Extinction Rebellion activists have today occupied Zara on Gran Via, with people glued on to the windows inside the store. People are holding banners saying ‘Green words, toxic truth’ outside Zara which is part of INDITEX group – one of the world’s largest fashion retailers – to highlight how corporates are using greenwashing strategies in the face of the climate and ecological emergency.

Zara has been chosen for today’s action as it currently is attempting to greenwash with its window displays that ‘demonstrate’ its social commitment to the motto of COP 25: ’Time to act’.

The fast fashion industry is the second most polluting sector on the planet – with a carbon footprint more than international flights and shipping combined. It uses 20% of water resources and emits 10% of CO2 worldwide, with its impact highly damaging in the countries of the Global South in particular, both environmentally and socially.

Ultimatum for humankind: Time has all but run out

Madrid’s COP25 represents a true ultimatum for humankind and all ecosystems: time has all but run out to avert the worst of the catastrophe our planet faces.

In the face of such unimaginable carnage, which scientists have been warning about for over four decades, the only viable option is for massive, peaceful and democratic mobilisation to demand immediate change, not just individual action. 24 years on from the first COP, the summit’s cause has become more crucial than ever.

Yet global commitment is criminally absent. Goals set out by previous COPs, including Paris’ COP 21 celebrated agreement, and ignored in a stubborn and suicidal pursuit of business as usual. A mere 16 countries out of the 195 which signed the Paris Agreement are complying with it. Meanwhile, the Amazon, Siberia, the Arctic and Koalas burn.

Come get involved with Extinction Rebellion during COP25

Extinction Rebellion has found its home during this COP25 at the UGT, Calle Hortaleza, 88 in Madrid, where there are events and representatives from a host of other movements and organizations including Fridays for Future and Ecologistas en Accion.

Spain is currently hosting rebels from as many as 19 countries and six continents and tt is expected that throughout these two important weeks, rebels will fill the streets, crowd Madrid’s plazas, inviting onlookers to join the rebellion for life, as other capitals act in solidarity.