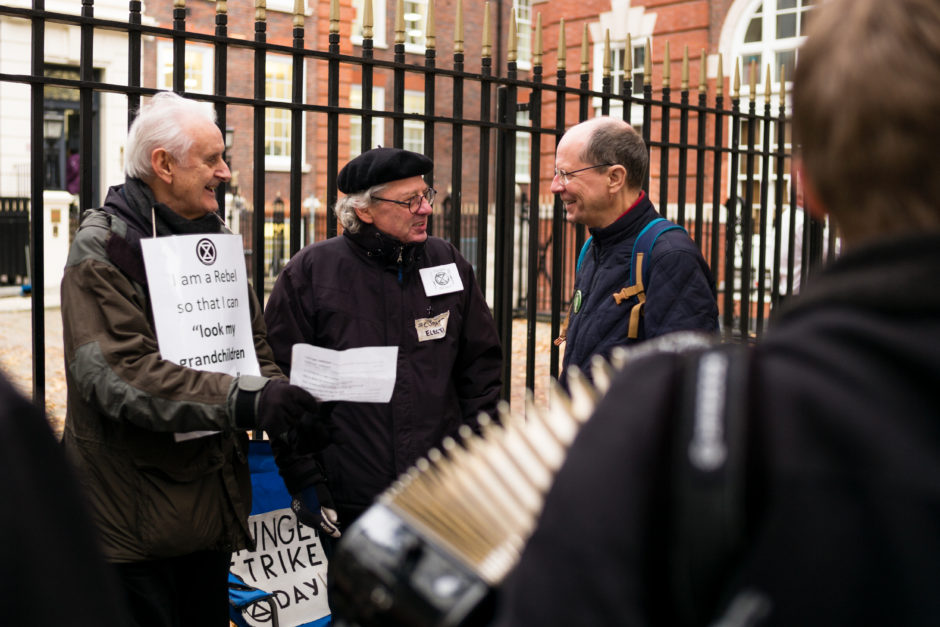 Five Extinction Rebellion activists continue their hunger strike for the third week outside political party headquarters in London to put pressure on party leaders to meet them to discuss the Climate and Ecological Emergency Bill, known as the Three Demands Bill [1] and act now on the climate and ecological emergency.

The hunger strikers reiterated the need for us all to Tell The Truth about our vulnerability to looming food shortages and the Green Party reiterated their support for citizens assemblies. They said: “Extinction Rebellion are doing so much to draw attention to the climate emergency, bringing the need for urgent action to the forefront of people’s consciousness.”

Sarah Lunnon, Political Circle Coordinator, Extinction Rebellion said: “We welcome the Green Party’s continuing engagement with Extinction Rebellion, and we now call on all Green Party parliamentary candidates to publicly endorse the Three Demands Bill. Any target other than 2025 crashes through our carbon budget and risks unimaginable horror for millions.”

Petra Metzger, 37, an art and design lecturer, said after meeting the Green Party “I feel despair. It is crucial that we aim for 2025 not 2030, even if we don’t know how to get there, we know we need to start the journey.”

Hunger strikers met with Adam Price, Plaid Cymru leader, last week for the requested meeting. Mr Price pledged to push for citizens’ assemblies on the climate crisis both at a Welsh Government and UK Government level. Activists have met with Labour and Liberal Democrats’ senior figures with follow up meetings expected. Only the Conservatives and Brexit Party are yet to make contact.

Peter Cole, 76, grandfather and emeritus professor of respiratory medicine, outside the Conservative Party Headquarters in London said: “We will stay here until they come down to discuss and agree to the Three Demands Bill, even if that means staying here until the election. We are laying our lives on the line to save our children and children throughout the world from dying. The government must act today.”

From December 7th Extinction Rebellion activists will peacefully occupy local party offices around the UK to demand all parties support the Climate and Ecological Emergency Bill (the Three Demands bill).  Hunger strikers are calling on people to join them in solidarity in their local areas on the day.[2]

Update from the Global Climate Hunger Strike around the world

This Global Hunger Strike highlights our current and future food vulnerability in the Climate and Ecological Emergency and act in solidarity with those already suffering. More than 500 people signed up in 28 countries. Many on 24 hour fasts in support of the Extinction Rebellion Hunger strikers.[3]

In Australia Dave McKay has been on hunger strike for 15 days, on the steps of Parliament House in Melbourne asking 12 members of parliament to meet him and discuss support for declaring a climate emergency in the state of Victoria. Dave has spoken to three MPs so far, with an email from a fourth.

In Israel Shadi Sror began his hunger strike on is on Day 20, demanding the Isreali government take serious action on climate change and the ecological crisis by supporting the Three Demands Bill.

Extinction Rebellion UK hunger strikers demand that all UK political parties and Parliamentary Candidates support the Three Demands Bill, and do all in their power to ensure it becomes law. The Bill calls for the following:

Further information on the Hunger Strike: