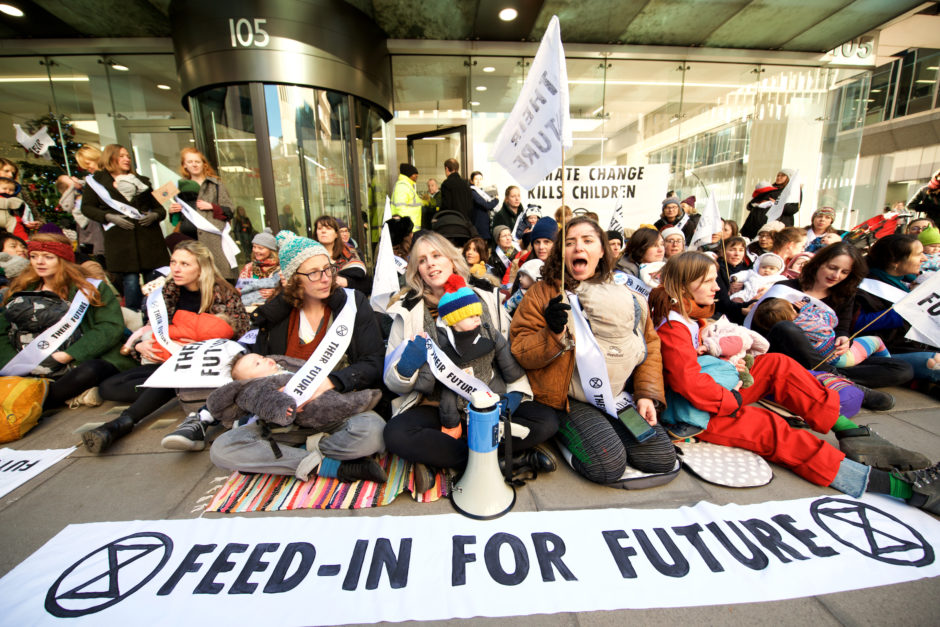 December 2 2019, London: Extinction Rebellion Mothers and Babies will stage a series of winter vigils in Westminster ahead of the UK General Election, demanding action on behalf of children affected by the climate and ecological emergency. It will be the first event to unfold as part of a wider Extinction Rebellion pre-Christmas agenda, ‘12 Days of Crisis’.

Breast and bottle-feeding mothers will blockade the headquarters of five major parties, while also singing and feeding their babies. They will wear sashes emblazoned with the words ‘Their Future’, and deliver a handwritten letter to each party calling on them to lay out their plan in response to the climate crisis. Actor Jaime Winstone, who has a son, Raymond, is supporting the protest.

The action will begin at 11am at Conservative Party HQ (4 Matthew Parker St, Westminster, London SW1H 9HQ), before moving on to Labour, the Liberal Democrats, the Green Party and the Brexit Party HQs.

“The climate emergency is already killing children – from food scarcity, pollution, drought, forced migration and disease,” said Lorna Greenwood, a former public lawyer and mother of two. “Whoever forms the next government will be the UK’s last chance to help put a stop to this human and environmental catastrophe. But so far none of the main political parties has shown the ambition we desperately need. On behalf of mothers, parents and carers everywhere, we’re taking action – to reclaim the future for our babies and to give them a chance of survival.”

Children are uniquely vulnerable to the adverse effects of the climate emergency, due to their higher exposure to toxins from air, food and water per unit of body weight, their incomplete physical and behavioural development, and their dependence on caregivers. The consequences include the following:

Actor Jaime Winstone, known for her roles in Kidulthood and Tomb Raider, said: “As a mother I am scared for my child’s future – for his safety and his health. Our government has failed us and the system has not prepared us to deal with the devastation of the climate crisis. We are now at a tipping point, where if we don’t act now, ours and our children’s future will not be secure. I refuse to just sit here in denial. Why has so much research been dismissed? We need everyone who can to come forward and support Extinction Rebellion, to make real noise and demand that the higher powers listen to us. I am sick of living in constant fear and anxiety due to the lack of action from our government and greedy, over-consuming businesses. This fight is non-negotiable, we must take action now in order for the future generations to thrive.”

Extinction Rebellion Mothers and Babies has already staged a feed-in in October in front of No 10 Downing Street. They also blocked Google’s headquarters in protest over their funding of think tanks that engage in climate denial. The mothers and babies come from many different walks of life, and include nannies, nurses and engineers.

We’re mothers. Some of us gave birth only weeks ago. Among us are childminders, nurses and engineers. Many of us have never been on a protest, a march or engaged in politics at all before.

We’re writing to you because we wake in the night in blind panic that we can’t protect our babies from the unfolding climate and ecological emergency. That one day, it’s increasingly likely that we won’t be able to feed them. That on the current trajectory, we may not get to see them grow up at all.

We know this crisis is coming for our children because it has already arrived in other parts of the world. Children are uniquely vulnerable to its effects and have begun to die in huge numbers. However far away they may seem, the pain of their parents is not invisible to us because we are parents too.

This is not hysteria or being “over the top.” This is a rational response to science, and a will to protect our beautiful children in the face of dramatically shortening odds.

Never have a group of leaders had so much power over the lives of so many children. What a responsibility –  we don’t envy you.

Please, we ask you now to read the science, and then act with courage. That means beginning the urgent process of transformation needed to move us off the suicidal path we are travelling along, to one that allows our children to live.

The mothers and babies of Extinction Rebellion