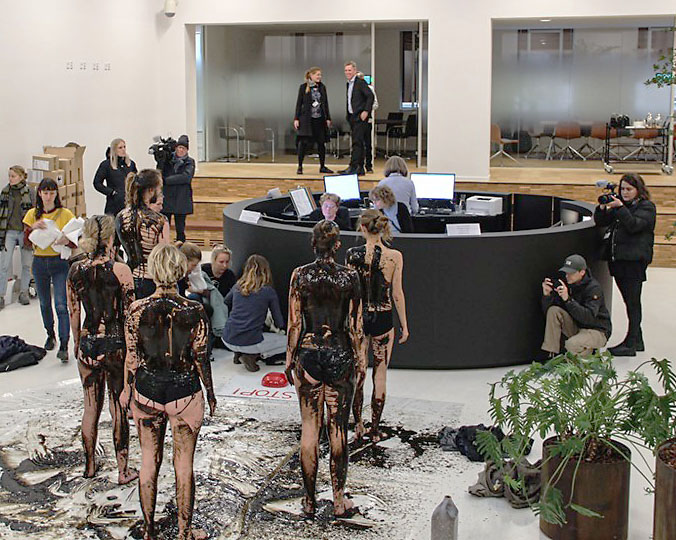 VIDEO from hunger strikers around the world made on Day 3

“I come from India, and for me it’s an act of conscience. I have been influenced by Mahatma Gandhi, who sat on fast many times in his life to express his dismay against the atrocities of imperialism. Now, I am sitting on fast in one of the most developed countries on this planet, Germany, to raise awareness around the severity of the climate and ecological crisis by punishing my body. Through personal sufferings, I want to increase the alarm that if the stern steps are not taken now, we won’t be able to stop the 6th mass extinction.

“India is already suffering due to climatic conditions, and hundreds of thousands of people are becoming climate refugees each year and entering into extreme poverty. As a person of color, and coming from a developing country, fasting in Europe’s biggest economy is the strongest message in itself that I am not going to sit silent no matter in which part of the world I am.

“This act is symbolic in many ways where activists are going to sacrifice their health so that all species could be saved. No matter an individual sits for a day or several days, it shows how serious they are and love mother earth. If anything goes wrong to these activists, the respective and the democratically elected government must take moral responsibility. Global Climate Hunger Strike is going to be unique in human history because the first time so many people from all parts of the world are sitting on fast to stop the ecological crisis. It’s a spiritual revolution.

“Since the governments have taken no extreme measures to stop the ecological collapse, these hunger strikers are now going to another extreme, and it is just a beginning.”

London, UK. 18 November. XR Hunger strikers will be outside UK political party headquarters all week demanding leaders meet us to talk about our #ThreeDemandsBill. As climate feedbacks kick in faster than predicted, food security is threatened. Globally, many of us already face hunger daily.

Grand Central Station, New York City. USA. 20 November. Tatjiana is on her third consecutive day of hunger strike, Valentin is on his second.

Dublin, Ireland. 20 November. Honoured to meet @ExtinctRebelsIE 78yr old Patricia today outside the Dail all week on #HungerStrike for her grandchildren’s future.

Rebels draw a line in the sand. Fifty people, aged 7 to 70, converged on a beach in North West England to create a 110m diameter representation, in the sand, of the Extinction Rebellion logo to highlight the need for urgent action on climate change and biodiversity loss.

Put the fire out! Stop financing deforestation! That is the demand of rebels outside Black Rock offices in London.

Week 44 of my #schoolstrike4climate but today I’m going to add another hashtag – #schoolstrike4nature. The nature and climate emergencies are both urgent environmental crises that need to be tackled and I am striking for action on both. #FridaysForFuture

Great VIDEO of indigineous Brazilians dancing outside HQ of Banque National de Paris (BNP), which is (one of?) the leading financers of companies destroying the Amazon.

Extinction Rebellion Vancouver rebels demand that the University of British Columbia (UBC) do the right thing and divest from fossil fuel investments. NOW!

Inspired by these organic cravings for real democracy, Extinction Rebellion Santiago held its own assembly to discuss the complicated socio-environmental situation in Chile. “It seemed important, given Chile’s current situation, to generate a free open conversation space”, said Camila, one of the people who organised the event.