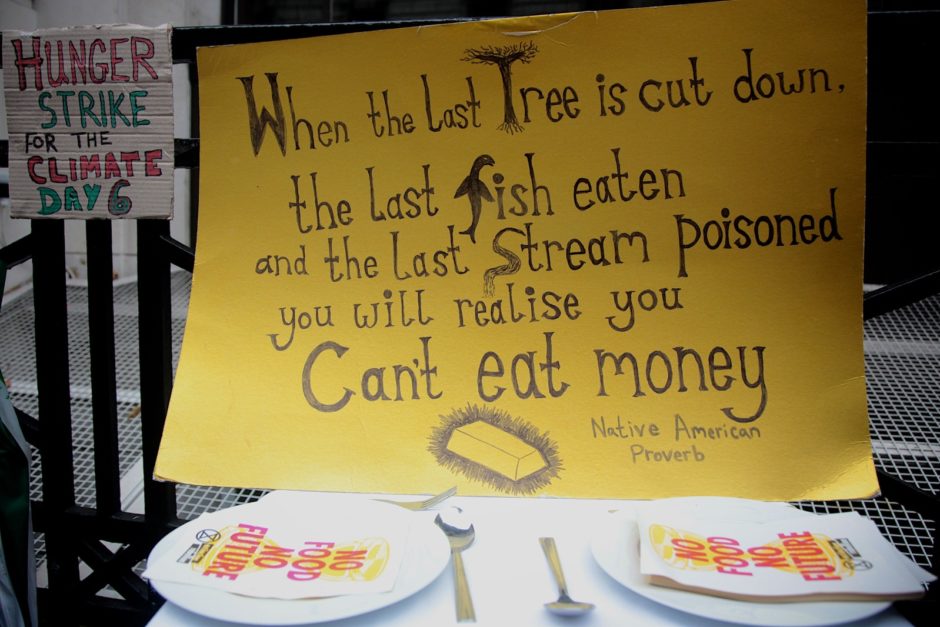 With seven hunger strikers remaining outside political party headquarters in London, Extinction Rebellion representatives yesterday met with Plaid Cymru’s Adam Price to urge him and his party to support the Climate and Ecological Emergency Bill, known as The Three Demands bill.[1] Four other hunger strikers are on extended strike in the US, Ghana, Israel and Australia.

On their tenth day of hunger strike outside UK political party offices Extinction Rebellion activists are demanding an hour long, recorded meeting with each party leader to discuss the Three Demands Bill.

The Bill calls for the Government to Tell the Truth: declare an emergency and educate the public about how serious and urgent it is; Act Now: commit to zero emissions by 2025; and go Beyond Politics: create a Citizens’ Assembly to decide how we achieve this. Extinction Rebellion members will continue their Hunger Strike until all party leaders meet with them to discuss the Three Demands Bill and commit to help make the bill law.

This is part of a Global Hunger Strike, to highlight our current and future food vulnerability in the Climate and Ecological Emergency and act in solidarity with those already suffering. Some 527 people have signed up in 28 countries, with 263 in the UK, with more people signing up each day. [2]

The Extinction Rebellion meeting with Adam Price, leader of Plaid Cymru, yesterday was the first full meeting with a party leader to discuss the Three Demands Bill since the Hunger Strike began.

Dr Larch Maxey, spokesperson for Extinction Rebellion, who spent seven days on hunger strike, said: “Adam Price spoke of his personal feelings as a father facing the Climate and Ecological Emergency, and of the need for urgent action as we are so vulnerable. Adam and Plaid Cymru clearly support the Three Demands Bill and I look forward to seeing all candidates and parties commit to jointly tabling the Bill in the new session of Parliament, so together we can get this Bill done!’’ Mr Price pledged to push for citizens’ assemblies on the climate crisis both at a Welsh Government and UK Government level.[3]

Shadow Chancellor John McDonnell met Extinction Rebellion hunger strikers on Monday outside Labour Headquarters, expressing his interest in Citizens Assemblies and pledging to try his hardest to arrange a meeting with the strikers and Jeremy Corbyn to discuss the Three Demands Bill.

Also on Monday, hunger strikers met with Ed Davey, Deputy Leader of the Liberal Democrats, who took a copy of the Three Demands Bill and pledged to help set up full meeting with Jo Swinson, commenting that he was in favour of Citizens Assemblies and deliberative democracy.

The Conservative party and Brexit party have yet to respond.

With the UN warning that greenhouse gases are at a record high with no sign of slowing down [5], and flooding across the UK and Europe, the hunger strikers remind politicians of what’s to come if they don’t act now.

Petra Metzger, 37, hunger striker and fashion lecturer originally from Germany, said: “With all the climate catastrophes happening in the world right now, the floods in northern England, the fires and droughts. I am terrified. If we are paying attention we should all be terrified. I am striking until we meet party leaders and get action.”

Peter Cole, 76, said: “As an emeritus professor of respiratory medicine I am very concerned about air pollution and carbon emissions. In my neck of the woods, Tower Hamlets, children have a 10 per cent reduction in lung capacity. This climate emergency is going to wreak havoc on our children’s and grandchildren’s lives so it behoves the generation who have been partly responsible for generating climate change to take drastic measures to make authorities act.”

Marco, 68, hunger striker and artist living in London, outside conservative party office: “It is the duty of the current government to take care of the nation. As they have chosen to do nothing it is a dereliction of duty.”

Petra, Marco, Peter, and four others are on their tenth day of hunger strike and remain outside party headquarters in London with other extinction rebellion activists.  There is medical support to assess them on a daily basis.

In the US Eric Tien and Stephen Leas have entered day 10 of their hunger strike, vowing to continue until House Speaker Nancy Pelosi meets with youth climate activists for one hour on camera to discuss the climate and ecological crisis that threatens the collapse of civilization.[6]

Eric Tien, 37 from Baltimore said: “I must continue as long as I can for everybody’s sake. To give up now would be to betray my beautiful nephews and nieces who will have to scramble for their survival … either we fight now or we lose everything.”

Tien spent the first four days of his hunger strike occupying Speaker Pelosi’s office in Washington DC before police arrested him and eight other hunger strikers from her office.

Leas, 28, said: “I am hunger striking because the climate crisis is an emergency.  The fires, floods, hurricanes, and food scarcity that will come from this crisis are a direct threat to my future, my family’s future, and my generation’s future.”

There will be solidarity events in Washington and San Francisco on Thanksgiving, and hold a die-in and “red hands procession” in front of Pelosi’s house.

In Australia, Daniel Bleakley, 37-year-old mechanical engineer and business owner from Melbourne has been on hunger strike for ten days and a regular presence on the steps of the Victorian parliament in a protest about the government’s lack of action on climate change.[7]

Marina, 18, British Mexican in Ghana has also been on hunger strike for ten days “I may use this one: I am living with the people who have done nothing to cause climate change, who grow their own fruit and vegetables. The people that will be on the frontline of this catastrophe, the ones that will go hungry first. I’m doing this for them. We can stop this. But we need your help. Please.”

In Israel, Shadi, a Palestinian and citizen of Israel has been on hunger strike for more than two weeks to demand action on the climate and ecological emergency.

Sweden’s Minister of the Environment agreed to meet with Swedish hunger strikers. In the Netherlands, hunger strikers sat down with officials from the municipality of Wageningen for a recorded meeting to push for tougher action on the climate and ecological crisis. The city of Miami, Florida agreed to one of Extinction Rebellion’s key demands last week when it declared a climate emergency following a three-day hunger strike by an Extinction Rebellion climate rebel.

[2]Further information on the Hunger Strike:

[3] Press Release from XR Wales here a video will be available shortlyWales.

For more information on the meeting with Adam Price, Plaid Cymru, contact xrcymrupoliticalcircle@gmail.com

[7] Australia: Op Ed in the Age from Daniel Bleakley https://www.theage.com.au/national/victoria/why-i-m-on-a-climate-hunger-strike-20191127-p53eng.html