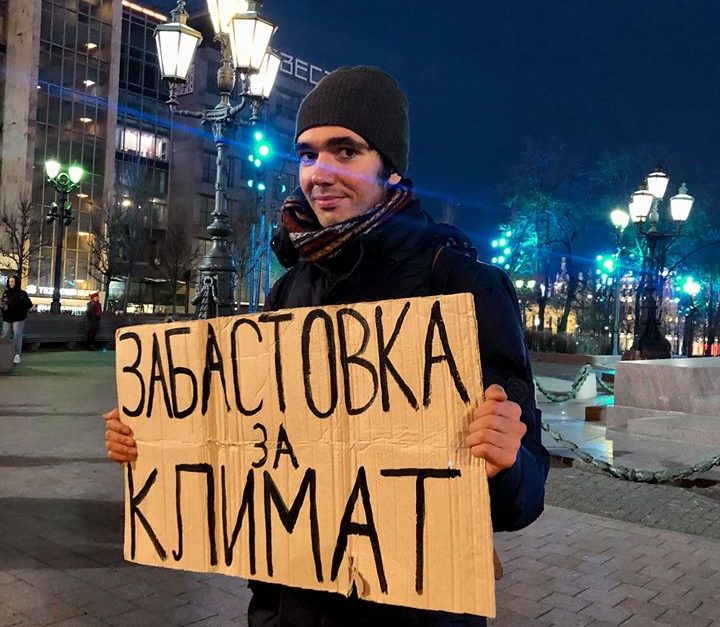 Climate Striking in Russia – Experiences of an Environmental Activist

In this issue of Exploring XR, we hear from Arshak, a young violinist who began making headlines with his solo protests in Moscow’s Pushkin Square back in the Spring of 2019.

Dubbed by some ‘Russia’s answer to Greta Thunberg’, the Fridays For Future (FFF) activist is currently awaiting his trial for his FFF strikes, scheduled for Thursday 28th November. Please take this moment to show your support for Arshack on his Twitter and Facebook – the more voices we have in his defence the better chance his trial will be positive.

Here, he describes his motivation, his experiences and the challenges of being an environmental activist in Russia  — the world’s largest exporter of oil and gas combined, and where government relies heavily on revenues from fossil fuels and shows little regard for basic civil liberties.

He also has a message for XR rebels world-wide. But let us hear Arshak, in his own words.

“I’m Makichyan Arshak a 25 year-old climate activist.  I graduated from Moscow Conservatory last year. I’m a violinist. But now I’m spending almost all my time on activism and thinking about what to do with my life.

I read about Greta Thunberg’s strike in October a year ago. It was strange to learn about the climate crisis from a girl from Sweden, not from my parents or from school. Then it took me a long time to find the courage to start the Climate Strikes in Russia, and to really understand the severity of the crisis.  That we can’t save the planet with life-as-usual. That we can’t save the world by just buying a new electric car… or trying to be greener.

Once I had understood this, I had to do something beyond changing my lifestyle. That’s why I started my Fridays For Future strikes, although it was a scary thing to do in Russia.  My first strike was on March 15th.  I have been striking every Friday since that day.  I’m coordinating FFF Russia and trying to organize it like it has to be – an independent, democratic, grass-roots movement.”

Being an environmental activist in Russia is a highly risky undertaking.  We asked Arshak to explain the nature of the challenges he faces.  He highlighted the draconian restrictions on public assembly in Russia, where even single person pickets can result in a fine or detention of up to 15 days, and repeated breaches of this law has resulted in prolonged jail sentences for activists.

“In Russia you can be arrested for just gathering in a square with a few people if it’s not approved by the Government beforehand. The most scary FFF action was on 25th October when, in spite of being refused permission by the Government, we striked as a group. There were three of us, standing in Suvorov Square with our posters, and we were arrested for this simple act. It was not the most important action, but it was the most symbolic. I received many messages of support after this.”

In spite of his growing visibility, Arshak explained, his everyday life remains suffused with fear and apprehension, in large part because of the authorities’ arbitrary exercise of power – a not uncommon tactic of authoritarian regimes to suppress dissent. In his words:

“Things are changing but fear remains. At first it wasn’t so dangerous, but I was scared because I was alone. Now there is more attention to the climate crisis but as the authorities don’t care about the law, for me, it’s quite uncomfortable to live here.

It’s torture to live and to know that they can arrest you any day during the year.  The worst thing is waiting for something bad to happen.”

A further concern to Arshak and other FFF activists is the possibility of being labelled a ‘foreign agent’ by the Government, a term with connotations of ‘spy’ or ‘traitor’ in Russia, and with potentially serious ramifications:

“We have Greenpeace, WWF, and other environmental organizations working here, they are trying to make a difference. Some of them were unilaterally declared ‘foreign agents’ by the Ministry of Justice and were shut down. This was the case with the Russian NGO Ecodefence and the 65 year-old activist Alexandra Koroleva, who is facing criminal charges and has now sought asylum in Germany. The Russian government could also easily declare us foreign agents.”

Adding to the insecurity created by the State, attacks on activists have been on the rise since 2015, including the shocking and brutal attack on human rights defenders by a group armed with baseball bats in 2016, and the acid attack on LGBT+ activists in 2018.  Arshak has not been spared:

“There is a lot of bad stuff happening. Back in July, I was doing a single-person picket in Puskhin Square. A man came up and asked why I had such an inscription on a poster around my neck (‘Strike for Climate’).  I tried to explain, but he did not listen to me and he couldn’t even explain why he didn’t like my poster.

He then began to threaten to kill me if I did not remove the poster. After a couple of minutes of his insults and intimidation, I removed the poster and decided to call the police.

This man sat quietly on a bench for about 15 minutes, and came up to me a couple more times. By the time the police arrived, he’d left. They did nothing to try to catch him.”

On the whole, though, the greatest challenge from the public has been their lack of awareness rather than outright aggression. This left Arshak struggling with anger, loneliness and a sense of disconnection that rebels elsewhere might recognise:

“Most people don’t understand what the climate crisis is. I was angry because most of them — and the state, of course — didn’t care about the environment. But I felt that I could change something. And there was loneliness because most people were not doing enough and I couldn’t understand them.

In the beginning, too few people were paying attention to my climate strikes. In March this year, around the time of the first Global Climate Strike, there was almost no information about the climate crisis in our media.

So I was trying to find the right words for my posters because not everyone had heard about the Paris agreement or knew about climate change.

After the second Global Climate Strike in May 2019, some independent media started to write about the Climate Strikes, but mostly it was like we are from another planet. Some media were referring to the strikes as a form of eco-terrorism and were reporting that ‘foreign forces’ were organising ecological protests in Russia to destabilize the regime.

Even when the UK parliament declared a Climate Emergency, our media were silent.”

But, Arshak continued, public awareness is beginning to change as it becomes increasingly difficult to ignore the climate and ecological crisis, and so too is the Russian government’s response.

“So at first, people’s awareness was changing too slowly but after the enormous forest fires in Siberia and the floods in the Irkutsk region this year, people started to understand that something is wrong with Nature.

Then during the third Global Climate Strike in September 2019, the Russian government finally ratified the Paris agreement. It’s only the beginning of course, but for us – the 700 or so climate activists that had been protesting in 30 cities across Russia – it was a great victory.

Now we have more problems with the government because they are afraid that the climate movement will grow like in Europe. But we have much more support in Russia now: people cannot join us because of the laws around protest, but they have expressed support in other ways such as taking pictures of us or with us.

The State is wondering what to do with us. They can’t understand what we are: they don’t understand how activism works, what a grassroots movement is or even why we would want to save the planet.

So we have time to get more support. I’m afraid that they want to use us and deceive us and try to divide the movement. But they can’t beat us, because we are telling the truth and you cannot put the truth in jail.”

As we near the end of our conversation, Arshak reflects on what has been achieved since he began his FFF strikes just over eight months ago:

“There are a lot of good things happening. There is a real FFF Russia movement, and we are trying to change something, to build a new wonderful world.

Refused permission to hold a mass strike, climate activists decided to strike in a queue. Near the Gazprom office, St. Petersburg, November 2019

There are a lot of small victories, like when after the third attempt the government gave permission for a mass strike – one day after I had written to them that I would strike every day if they refused.

Or when I was first detained for taking part in political protests a lot of activists from all around the world supported me. Everyone was asking how they can help. It was great.

So for me, it’s mostly about small but very important things.”

Finally, we ask what he would like to say to rebels and environmental activists across the world, whatever their involvement and challenges they face. He told us:

“Most of you are trying to do something to prevent catastrophe. And I want to thank you.

Personally, I don’t know what to be afraid of, to be arrested or to survive till 2030 and to see the horror.

But I am going to continue my strikes and do what I can.

I feel that I’m living in the shadow of catastrophe. I’m afraid to fall in love and to have a family. I’m so scared to walk on the streets. I’m angry at people. I’m mad at myself, thinking that I’m not doing enough. Anger and fear are my life.

This crisis is much bigger than anything that we have ever encountered in our history.  And if we want to survive we need to do the impossible.

And now we need actions, not words.”

Here, you can read a recent article about the Russian climate strikers’ highly creative method of a ‘single’ continuous solo-strike.