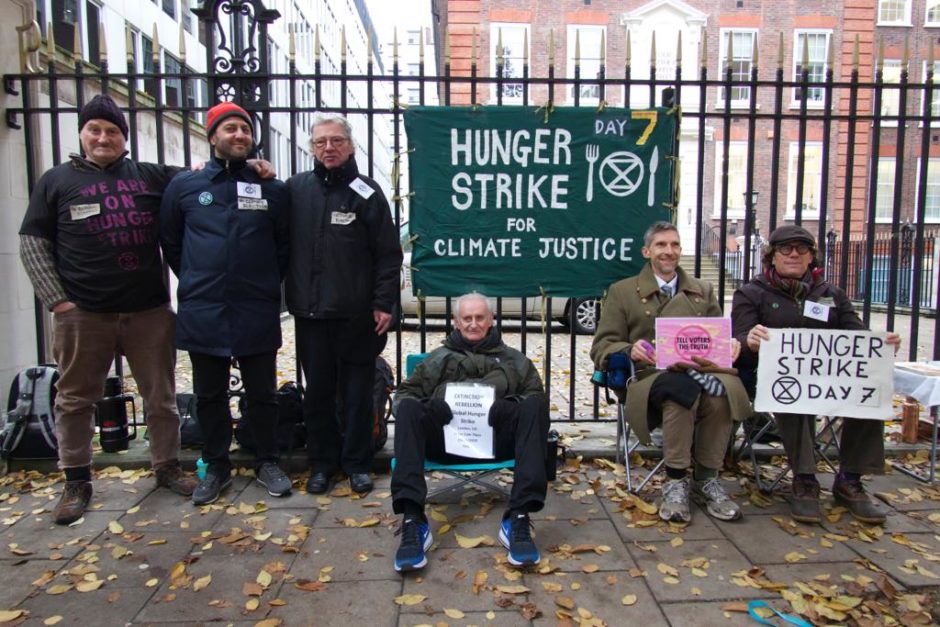 Today, nine hunger strikers start day eight outside political party headquarters in London, with others in the US and Ghana. More people are signing up to the Global Climate Hunger Strike every day, some 526 people in 28 countries have joined so far, with 263 people in the UK. Some ended their week long hunger strike at the weekend.[2]

Extinction Rebellion UK is asking all UK political parties and Parliamentary Candidates to support the Three Demands Bill and have requested filmed one hour meetings with party leaders to discuss their support.  The Three Demands Bill calls for the Government to declare an emergency, commit to zero emissions by 2025 and create a Citizens’ Assembly to set out how we achieve this.

The Conservative Party and Brexit Party have not responded.

Dr Larch Maxey, a spokesperson for Extinction Rebellion, said: “This UK Climate Hunger Strike will continue until all parties support The Climate and Ecological Emergency Bill. We’re getting closer daily to Extinction Rebellion’s demands being met, leaders are saying they support the Bill and are committing to the Citizens’ Assembly leading Parliament with mandatory powers. These are major steps forward and we need these meetings to ensure their support is rock solid and results in the Bill becoming law.”

“I need to teach on Monday but I will continue the hunger strike. We can’t give up, it’s the election in just over two weeks. We must reach the people in power to recognise that all of us are vulnerable. We need to come together as people and work out what we need to do together in this climate and ecological emergency.”

Marco, 68, hunger striker and artist living in London: “I am hunger striking as I cannot stand the inaction of the political parties in dealing with the Climate and Ecological Emergency.  The scientific facts are known, everybody understands it is a matter of urgency. The science is ready, the technology is ready, what’s missing is political will.  Time is of the essence. Political leaders need to make decisions now to protect all our futures.”

Monty, 61, hunger striker and teacher from London, “I am doing this as a spiritual act to point out the difference of being in the mind and being in the heart where compassion and love reside.  We need to leave the materialistic mind behind and get into the compassionate heart in order to save life on earth and ourselves.”

Ferhat Ulusu, 41, hunger striker and freelance photographer, London, said: “As the general election approaches, I can’t stress enough the urgency to stop neglecting our climate and social breakdown. Great Britain has such potential to lead the way in adopting our three demands bill. How about now?”

The Global Climate Hunger Strike was initiated by Giovanni Tamacas of Extinction Rebellion US. Giovanni’s mother is from Vietnam and father from El Salvador. Like millions globally, his family are already feeling the devastation of the Emergency.  People have signed up to the hunger strike from Australia, Canada, Argentina, India, Italy, South Africa and more.

In the US, Eric Tien will be continuing his hunger strike until House Speaker Nancy Pelosi meets with the hunger strikers.  Eric said: “My anger has left me and all I’m left with is sadness. The hunger has not left as I imagined it would. It gnaws at my stomach all day and all night with a relentless ache. Yet my hunger for change propels me forward. My suffering is nothing compared to what’s already happening, and is non-existent compared to what our future holds. My beautiful nieces and nephews will have to scramble for their survival run and wonder how we got here.”

Marina, 18, British Mexican in Ghana “I’m going to carry on until leaders tell the truth and start to take this climate crisis seriously, until leaders stop playing with our futures. I’m doing this for all the people whose voices have been silenced, for the indigenous and the people of colour that are living climate change. And I’m doing this for all the youth, for all the 16 and 17 year olds who cannot vote, because I know how frustrating it is to not have a say when it is your life at stake. Let’s stop this climate catastrophe.”

In Israel, Shadi, a Palestinian and citizen of Israel has been on hunger strike for more than two weeks to demand action on the climate and ecological emergency. He said: “I am doing this so all children have a future, including my own five-year-old son. The seriousness of the situation requires using the strongest peaceful tactics available. Hunger strike is one of those tools. I hope the government acts soon.”

Sweden’s Environment Minister has agreed to meet with Swedish hunger strikers. In the Netherlands last Wednesday hunger strikers sat down with officials from the municipality of Wageningen for a recorded meeting to push for tougher action on the Climate and Ecological Crisis.

Six hunger strikers from Extinction Rebellion Barcelona stationed themselves at Palau de la Generalitat, the headquarters of the regional government.

[2] Further information on the Hunger Strike:

Photo & Film opportunity: Find photos of hunger strikers from 23 November, 24 November here and for other days search in the relevant day here. (Contact 07969 083 371)