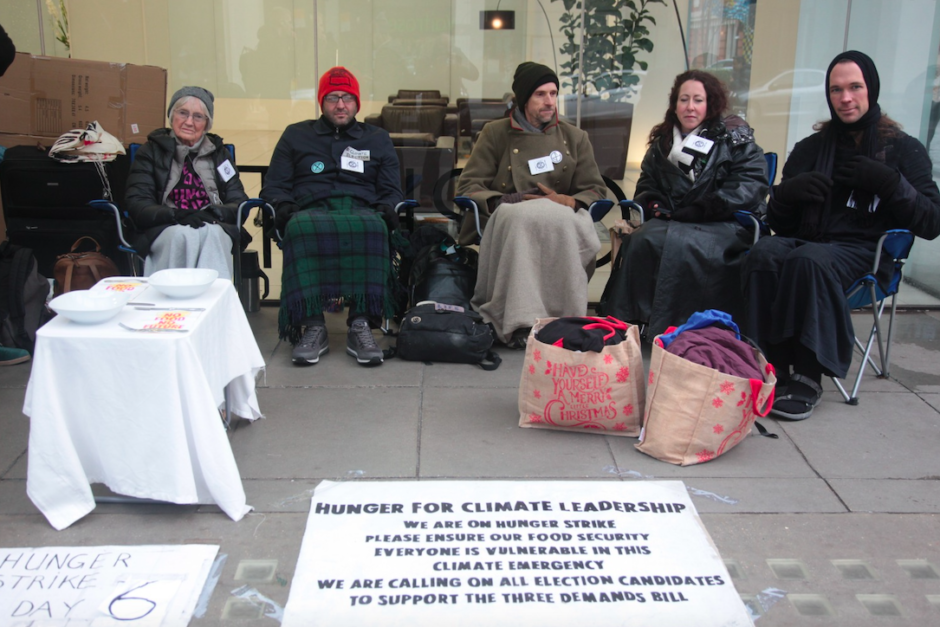 Extinction Rebellion protesters continue their hunger strike outside the political party headquarters through the weekend in London to demand urgent action on the climate and ecological emergency we all face, reminding politicians of what’s to come if they do not act now.  Some 524 people in 28 countries have joined the global hunger strike, with 263 people in the UK.

Extinction Rebellion is asking all UK political parties and Parliamentary Candidates to support the The Climate and Ecological Emergency (“Three Demands”) Bill and have requested filmed meetings with party leaders to discuss their support. [1]

The Liberal Democrats, Greens and Plaid Cymru have agreed to meetings with their party leaders and Extinction Rebellion. Extinction Rebellion is in discussions with Labour about meeting, but the Conservative Party and Brexit Party have not responded.

Dr Larch Maxey, spokesperson for Extinction Rebellion, said: “The hunger strike occupations of party offices have been so successful already. With parties meeting us and supporting the Climate and Ecological Emergency Bill we’ve achieved a lot this week. But we’re only just beginning. We need to build more pressure on all parties to support the Bill. Everyone can join us, whether on hunger strike, showing support or occupying party offices”

Sarah Lunnon, Political Circle Coordinator, Extinction Rebellion, said: “The Global Hunger Strike highlights those communities and families that struggle to eat today due to extremes of weather. As we continue to fuel the collapse of our life support system this hunger struggle will come to us and our children, we too are vulnerable to food shocks and to empty aisles in our supermarkets.”

Mike Goldthorn, 30, hunger striker and care worker North Wales, said: “The thinking and feeling behind the hunger strike is to highlight the vulnerability we have in food security. We are hunger striking in solidarity with the people already suffering and the generations to come. I’ve been on hunger strike since Monday and people I’ve been chatting to are amazingly supportive of what we are doing.”

Petra Metzger, 37, hunger striker and fashion lecturer originally from Germany, said: “Hunger striking is powerful because we need to acknowledge that we are vulnerable to the decisions of people in power.  We need those people in power to understand their responsibility and step up and act now to address the climate and ecological crisis we are in. We need them.”

La Pethick, 83, hunger striker and grandmother from East Sussex, said:“We are here on our hunger strike surrounded by food.  We are jolly lucky to be surrounded by food because children all over the world are not. They don’t go on hunger strike, they just are hungry, so we are doing our bit to help them out by asking party leaders to sign up to our three demands. Which are; please government tell the truth about the climate and ecological emergency, net zero carbon by 2025, and convene a citizens assembly mandated to tell the government the best way forward.”

Beth, 18, hunger striker and student from Manchester University, said:“I’ve been on hunger strike since Sunday night. We have been trying to get each political party to agree to the Extinction Rebellion three demands bill. I was really excited about the election because this is the first time I can vote in the General Election, but then I realised I don’t have anyone to vote for because none of them are going to deal with the climate emergency fast enough.  It is so important that the party leaders make the time to speak to us and agree to the 3 Demands Bill.”

On Monday, Green Party leader Jonathan Bartley expressed his support for The Three Demands Bill. He pledged an urgent consultation with party members to discuss support for the bill.  A meeting will take place on Monday 2 December.

On Wednesday, Liberal Democrat President Sal Brinton initially spoke with hunger strikers outside the Lib Dem HQ. The hour long meeting with the Liberal Democrats has just been confirmed to take place with Ed Davey, deputy leader, and another member of the party on Monday 25 November.

In Wales, Plaid Cymru, have agreed to an on-camera meeting next week, on Tuesday 26 November.

John McDonnell, Shadow Chancellor of the Exchequer, quickly exchanged words with rebels on Wednesday and made a soft agreement for a meeting by Saturday but Extinction Rebellion is yet to hear back from Labour on an hour long meeting on camera.

Larch Maxey added: “Yesterday Extinction Rebellion tried to hand a copy of the letter requesting a meeting to discuss to the Three Demands Bill to Nigel Farage, but he ignored us and fled away in his 4 x 4 at speed, so then we tried to hand it to a representative but again we were declined”

Elsewhere the hunger strike is working.

Sweden’s environment minister has agreed to meet with Swedish hunger strikers. In the Netherlands on Wednesday (Nov 20) hunger strikers sat down with officials from the municipality of Wageningen for a recorded meeting to push for tougher action on the climate and ecological crisis.

Six hunger strikers from XR Barcelona have stationed themselves at Palau de la Generalitat, the headquarters of the regional government. In the United States, hunger strikers with XR Washington DC occupied House Speaker Nancy Pelosi’s office to demand that she stops blocking passage of the climate emergency resolution. Students at Columbia University in New York are demanding the university divests from fossil fuels.

Extinction Rebellion UK hunger strikers demand that all UK political parties and Parliamentary Candidates support the Three Demands Bill and do all in their power to ensure it becomes law. The Bill calls for the following:

Tell the truth: Tell the truth by declaring a Climate and Ecological Emergency and do all in their power to communicate the urgency for change, including working with government and other institutions.

Beyond Party Politics: Help the government create and be led by the decisions of a Citizens’ Assembly on climate and ecological justice.

Everyone who will participate as a hunger striker will need to fill in a form. The form is mandatory and if a striker is not registered, they will not be considered as part of the Extinction Rebellion Global Hunger Strike. This is for safety reasons.

Furthermore, we are imposing a strict 24 hours limit for participants under 18 to hunger strike for health and safety reasons. For an under 18 to participate they MUST have both medical and parental consent and complete this form.

Photo & Film opportunity: For footage of Election Rebels handing the letter to Party Leaders, or to be present for this, please contact: