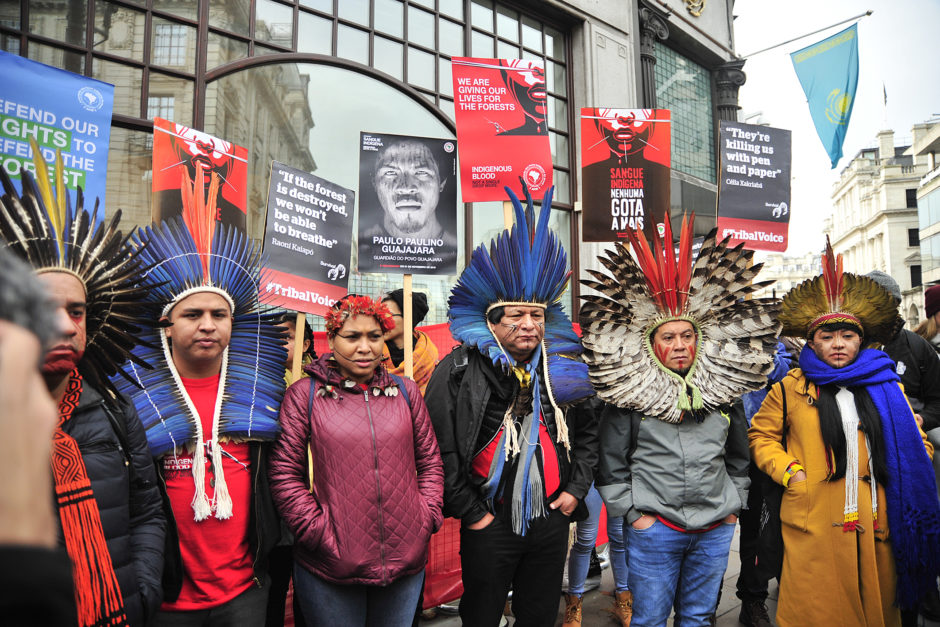 Today from 12pm Extinction Rebellion UK will gather in front of the investment firm BlackRock to engage in a dramatic, creative, nonviolent protest to challenge the firm as a main player driving the climate crisis and deforestation around the world. Facebook event here.

Activists will dump a pile of wood ashes (waste collected from pizza ovens and woodburning stoves) in front of BlackRock’s entrance doors. They will then put on a carnival of flames and ashes with chaotic dance performances, fire-jugglers, musicians, speakers from multiple groups, giving a personal account of the fate their communities and territories face when daily attacked by extrativist industries.

The group are calling for a year long #BoycottForAmazonia, asking people to stop buying products linked to Amazon deforestation and human rights abuses. The boycott is set to continue for at least one full year, but could be renewed if companies aren’t seen to take concrete action. Find more information about the boycott and how to get involved here.

BirthStrike founder and Mesadorm singer Blythe Pepino, said: “I’m protesting outside BlackRock because we must keep holding to account the behemoths that are funding, and therefore accountable for, the destruction and violence of Indigenous lands and people. I’m sending a clear message that we can see this happening in England, and it must stop both for social justice and environmental justice. Not enough of the general public know the power BlackRock has and a big part of the day is drawing attention to that power as well as demanding they change course.

I represent the BirthStrike movement, for whom child bearing has become an unbearable idea due to companies like this that have consistently funded our progress towards destruction and undermined the environmental movement towards sustainability. Corporations like these can bear the brunt of our grief and anger – had they acted responsibly and not in greed many years ago, the world could be in a much better position now, and we could be planning to have families of our own.”

Supporters and speakers are expected from groups such as Amazon Watch, Stop Ecocide, Parents for Future, and Animal Rebellion. The protest stands in solidarity with APIB (Brazilian Indigenous Peoples’ Association) as their delegation visits London as part of their European advocacy tour “Indigenous Blood: Not a Single Drop more” aiming to draw awareness to the serious violence native people face in Brazil for defending their land and rights.

Wildlife biologist and Extinction Rebellion activist, James Fox, 25, from London, added: “Companies like BlackRock fund and profit from the businesses exploiting Amazonia. We won’t stand by as Indigenous genocide and the decimation of wildlife continue in the name of ‘business as usual’. Indigenous communities are scientifically proven to be the best stewards of the natural world, and have been on the global front lines of climate and ecological destruction for generations. The climate movement must support the struggle for Indigenous rights – and BlackRock must divest from this destruction.”

Until the financial crisis BlackRock was unknown, but after its name was everywhere in the investment world. Nowadays this discreet investment firm surfaces in investigative reports as a lead investor in the crisis of deforestation and land conflict. Its investments in deforestation-risk companies have been increasing since 2014, from a total of $1 billion USD to $1.6 billion USD in 2018, making them top investors in deforestation from Brazilian forests to Indonesia or Borneo.

Aside from deforestation, BlackRock is the largest investor in coal worldwide, including in developing new plants. Coal is the world’s deadliest fossil fuel, damaging people’s health, destroying local ecosystems, and acting as the main driver of climate change worldwide.  Is a major investor in Tar sands, worse for climate than any other oil extraction; top shareholder in all the major companies seeking to drill the Arctic; and it is also one of the biggest investors in nearly every oil company operating in the Western Amazon.

As the Amazon rainforest burns and Brazil’s coastline surges with toxic tides, BlackRock is reaping the profits of human rights violations, environmental destruction and climate chaos.​​​​​​​ As the world’s largest asset manager, controlling more funds than the GDP of Japan, BlackRock could take advantage of its privileged position in the markets, and become a weapon in leading deforestation-risk free funds, and paving the way for a just transition towards a sustainable decarbonised lievable planet.