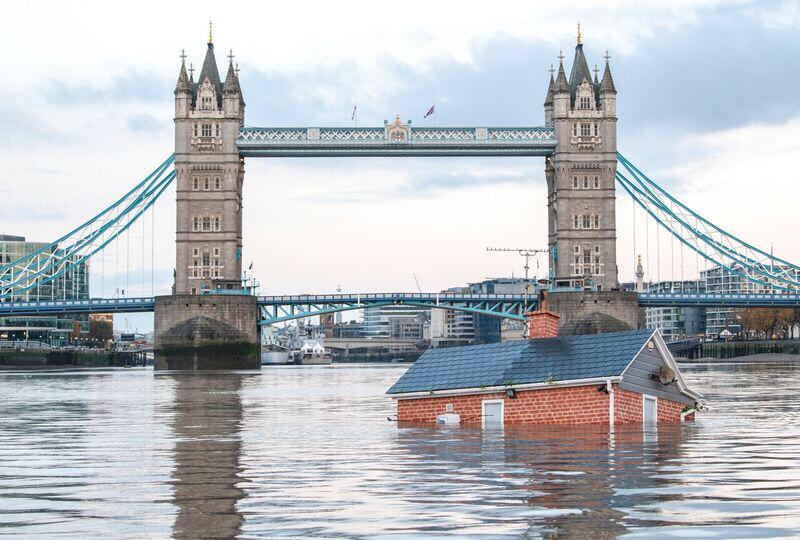 Act Now – Our house is flooding

Act Now – Our house is flooding

In the early hours of Sunday 10thNovember, Extinction Rebellion activists staged an action on the river Thames in London. A classic suburban house was seen floating down the river, sinking into the water in yet another attempt to send an SOS to the government on climate inaction and draw attention to the threat humans face from climate change and rising sea levels.

Representing the disastrous realities of projected sea level rises, perhaps the stunt was unnecessary. As the ongoing flood disaster in Derbyshire and Yorkshire has so starkly illustrated, our homes, businesses and families are at very real risk. We are watching, in real-time, as people’s lives are destroyed around the world and in the UK. Unless action is taken to halt biodiversity loss and reduce greenhouse gas emissions to net zero these tragedies are set to worsen.

Stephan Harrison, Head of the Climate Expert Committee (which advises the UK government on climate risks) commented: “We may be close to passing a tipping point for at least some of the large outlet glaciers draining the West Antarctic Ice Sheet, and this would commit us to significant sea level rise whatever we decide in terms of reducing Greenhouse Gas Emissions.”

Scientific predictions of rising sea levels by 2100 range from less than 1 metre to as high as 5. The Intergovernmental Panel on Climate Change (IPCC) suggest a rise of less than 2 metres, but past assessments have almost always underestimated the pace of climate change. The rate of melting Greenland ice sheets recorded this summer was not predicted until 2070. At its peak, this ice was melting at a rate of 140,000 tonnes per second – a total figure equivalent to 200 river Thames.

When asked for his own opinion, Professor Harrison added: “My prediction is that IPCC has probably underestimated the ice sheet response and the likely rate of future sea level rise”.

Katey Burak and Rob Higgs, who built ‘The Sinking House’ commented: “Sadly, climate-change is something that affects every one of us. We want to respectfully raise awareness of the severity of the impending human-made disaster. We need urgent action to address the Climate Emergency and devastation of our beautiful and precious natural world, which is being decimated at an unprecedented and tragic rate. We implore the government to act responsibly and we will continue to make our voices heard until they act.”

“When I hear the facts about climate change my brain can scarcely comprehend them, they are vast and scary. We wanted to make something that people can visually connect to, whilst leaning on the government and the experts to make the changes that need to be made. Until they make the big legal and financial changes, it’s very hard for people like me or you to make significant changes to protect ourselves and the world around us.”

Flooding is a political issue, disproportionately impacting our poorest and most vulnerable communities and Extinction Rebellion is calling on the government and those standing in the General Election to commit to acting now on the ecological and climate emergency.

Under new sea level rise projections, Stratford, Barking and Dagenham and large swathes of South and West London, East Anglia, Essex and Kent will be underwater by 2050.1 Despite our government’s denial, this is a national disaster eeking ever closer to the capital.

The Prime Minister does not consider widespread flooding across the UK to be a national emergency.3 Extinction Rebellion disagrees. Many people in the UK have had life-changing experiences this week, and there will be many more in low-lying and coastal areas affected by flooding over the coming winter. We stand in solidarity with all of those who have lost their homes and livelihoods and will continue to demand action until the severity of this national and global emergency is realised.

With thanks to Hermitage Wharf Community Moorings for their help with this action.

Global warming contributes to sea level rise in two ways. Initially, sea levels rose because of thermal expansion. We are now experiencing sea level increases caused by melting ice. Floating sea ice does not cause significant sea level rises in the same way that melting ice in a drink does not increase the level of liquid in the glass. Melting ice on land, however, does lead to increases in sea levels. If all of the ice on Greenland, currently melting at an alarming rate, were to melt into the sea it would increase average sea levels by 7 metres. Melting Antarctic ice from collapsing ice cliffs is fuelling sea level rises and there is sufficient water stored in such ice to eventually increase sea levels by between 20 and 60 metres. Sea levels are currently rising by around 3.3mm per year.

* IPCC says in a leaked draft report that if the planet warms beyond 1.5 degrees Celsius it would create ocean conditions “poised to unleash misery” (AFP)

* Fish stocks could decline substantially from already depleted numbers as a third of all fisheries are being exploited at an unsustainable rate. Fish and marine life declined by 50 percent between 1972 and 2012 (IPCC)

* A study by scientists at Exeter and other universities suggests that communities in Cornwall are particularly vulnerable to the effects of climate change and sea level rises and poorly equipped to mitigate the impacts. A combination of decentralised decision-making and budget cuts impede local adaptations to climate change.

●     In the UK, come to one of our events, join the Rebellion Networkand let us know how you can help out.

●     Start a group where you are: in the UKor around the world.

●     Check out the International XR website, with links to the French, German, Italian and UK websites.

●     And while your time and energy are of most importance, if you are financially able to donate money, see our crowdfunder.