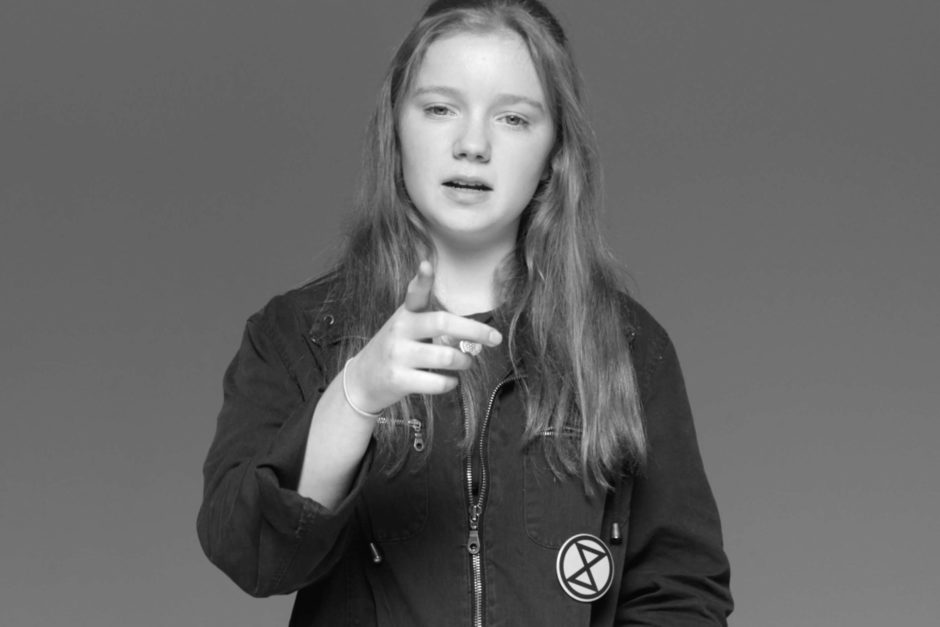 Marking six months since the UK Parliament declared an Environment and Climate Emergency, Extinction Rebellion – which has just celebrated its first year anniversary – is releasing a short film calling for everyone to demand their government’s plan to address the crisis … #WhereIsYourPlan

Through voices representing a lifetime, aged 8 to 80, the film demands that leaders around the world act on the climate and ecological emergency, including stopping the destruction of our forests, our oceans and our wildlife, reducing global zero carbon emissions within 10 years [1] and investing in a green economy.

The concept behind this globally significant film – presenting some of the demands of the climate movement and extinction revolution [2] – was developed by filmmaker Richard Curtis, and refined, shot and produced by RANKIN, an agency headed up by the British photographer and cultural provocateur of its namesake.

But the high profile support didn’t stop there … featuring faces from Downton Abbey to Love Island, and including the likes of Ellie Goulding, Daisy Lowe, Jaime Winstone, Chris Packham, Imelda Staunton, Jim Carter and Stephen Frears, the video showcases a series of short clips where voices from every generation, representing a lifetime, make an emotive demand to governments for their plan to address the emergency.

Directed by Jordan Rossi of RANKIN, the film shows that despite our race, age or gender, people need to unite against the threat of the global warming crisis. No matter who you are, this is an issue that will affect everyone, and the video reflects our last shot at making a difference.

Now is the time for positive action on a scale as yet unseen. It’s time for the people in power to listen, and it’s time for them, as well as us, to act now, to protect all life on our planet.

“If the British Government were to cut carbon emissions within the so called carbon budget we have, we would need to go from 1.5% annual cut to about 24%. That needs a serious plan. Our children, our future and our wildlife need our Government to step up and face reality. “

“Time has run out. It’s act now or face almost unimaginable consequences for life on Earth. So if the drivers of change are asleep at the wheel, it’s time to shake and wake them with one hand and to empower ourselves to make our own differences with the other.”

‘This film must reach governments and ring the alarm bell to act now on the climate crisis we are all living in. We must all ask of them #WhereIsYourPlan’

“This clearly demonstrates the hard work being put into ensuring a growing diversity of Peoples of Conscience voices from all over the world backing XR up in internationally catalysing Rebellion and equitably amplifying the urgency of tackling Climate Breakdown as the topmost globally unifying matter for us all at this increasingly dangerous time of escalating Climate and Ecological Crises!”

“As young people, having a plan is vital for having hope for our futures. We need governments to act now and take the climate and ecological emergency seriously. We need to be active in our democracy and ask the government #WhereIsYourPlan”

“Extinction Rebellion are on the front line of one of the most important subjects of our time and we’re pleased to be amplifying their message with a soundtrack as immediate as their cause.”

“Government has failed to produce a plan to safeguard our health and safety through this crisis. As doctors we have a duty to rebel in the best interest of all people and the planet.”

“My generation is being handed a planet riddled with extinction and infested with greed. If our species is to find a sliver of hope among the wreckage, we must create it ourselves, and we must create it through action.”

“Climate change is happening whether you like it or not. The question is, are governments willing to do something about it or are they prepared to face the consequences in the future?”

“All around the world, young people are striking from school, marching in the streets and begging us to take action. Gradual and individual changes aren’t going to cut it. We are facing an unprecedented emergency and we must act now. As Greta Thunberg says ‘If standing up against the climate and ecological breakdown and for humanity is against the rules, then the rules must be broken.”

[1] The film says 10 years – Does this mean Extinction Rebellion no longer demands 2025?

UK – 2025 – Extinction Rebellion’s second demand is that the British Government must act now to halt biodiversity loss and reduce greenhouse gas emissions to net zero by 2025. This is because historically the UK is the 5th biggest emitter of GHGs and in order to stick to a carbon budget inline with the Paris agreement which takes equity into account the UK will need to cut faster.

Global within 10 years – This is a global crisis and we need the world to get to global net zero. The IPCC says global net zero by 2050 + future negative emissions which gives a 50% probability of avoiding 1.5C. We say those odds are nowhere near good enough – we need to be talking about global net zero by 2030, and all governments will need to play their part. We can’t rely on negative emissions technologies when the science tells us that once tipping points are breached runaway climate change can be set in motion. The latest IPCC report speaks to one of the most serious tipping points – that methane in the permafrost will be released on current trajectories.

[2] The content of the film is based on the Emergency People’s Speech, developed during Extinction Rebellions’ October Rebellion in London by a series of People’s Assemblies representing the different rebel sites, which demanded that Government Departments disclose their emergency plans by the end of November. The original version of the speech was delivered by Dr Gail Bradbrook in Trafalgar Square on 11 October:
https://docs.google.com/document/d/1ZTnNb4Dk-hSm3q0RrqX1I5vBv02O6faBtRcVNwxcw30/edit