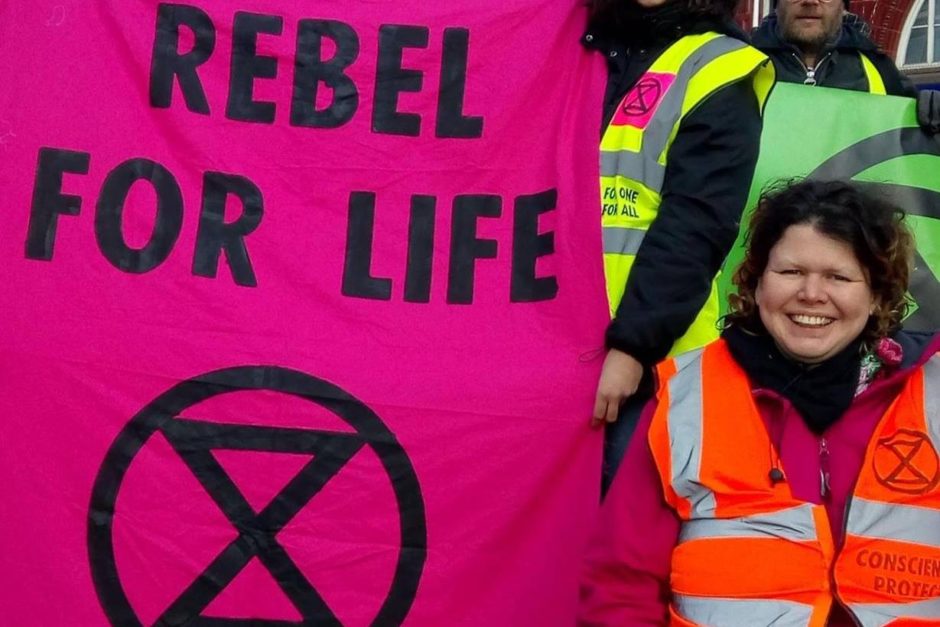 An Extinction Rebellion protester has been acquitted of criminal damage for spray-painting the headquarters of Cambridgeshire County Council last December.

Angela Ditchfield, 41, was found not guilty on Wednesday by Cambridge Magistrate’s Court which ruled she had acted in order to protect homes and land from the effects of climate breakdown.

Angela, also a member of Christian Climate Action, admitted that she had applied the spray-paint, but pleaded not guilty on the grounds of having a lawful excuse to do so. In cases of minor criminal damage, acting to prevent immediate damage to property can be counted as a lawful excuse.

“We find that you have a very strong and honestly held belief that we are facing a climate emergency, and that you acted on the spur of moment to protect land and homes under threat from climate change, believing that immediate protection was necessary, and the action could be said to have been taken to protect property, and that you believed action chosen was reasonable in all circumstances…We find you not guilty.”

While the ruling, coming as it does from a magistrates court, cannot set a legal precedent, it was nonetheless hailed a ‘wake up call to the judiciary” by solicitor Raj Chada, who acts on behalf of many Extinction Rebellion defendants.

“This is a wake up call to the judiciary as a whole to evaluate all the Extinction Rebellion cases going through the courts and to look at the evidence being brought forward about the impending climate crisis.”

During the case, Angela gave evidence that she had, for many years, attempted to persuade her local council to act to prevent climate chaos by standing for the Green Party, and arranging meetings, petitions and letters. However, Cambridgeshire County Council’s 550 page business plan for 2018-19 did not contain a single reference to the climate.

“Contributing to climate change as we all do, amounts to criminal damage to the whole web of life on earth, and violence against its poorest people.

I’m happy to have had the chance to expose in court some of our local councils’ roles in that – from threats to build homes on my local park St Albans, to investments in fossil fuels and not making public transport affordable.

I’ve tried all the democratic means and they weren’t achieving enough alone. We need more people using civil disobedience to force all levels of government to take the need for climate justice seriously.”

“The climate and ecological crisis has already begun. While those in the Global South are worst affected by these changes they pose an immediate threat here in the UK as well. It’s not too late to act but we must do so now.

“This important judgment recognises the direct threat of climate change to property and people and concedes that direct action like this may be justified to avert the greater damage that climate change promises. We hope other courts take note.”