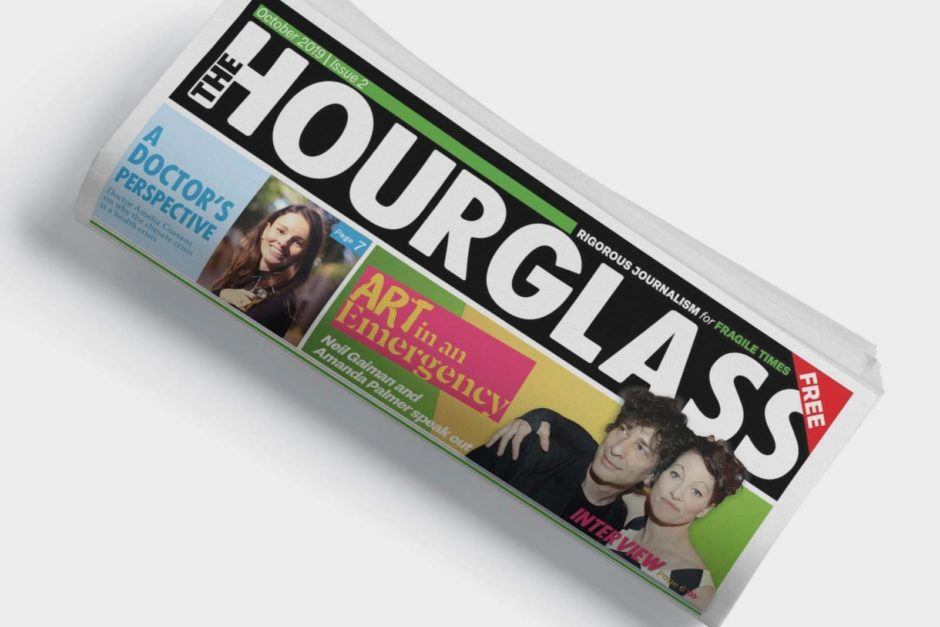 Issue two of The Hourglass has landed!

Issue two of The Hourglass newspaper has been released today. Printed on recycled paper and with a distribution of 145k papers, The Hourglass is being distributed by rebels from Extinction Rebellion’s regional groups across the UK who believe in telling the truth through the press.

The Hourglass second edition features an exclusive interview with Amanda Palmer and Neil Gaiman, a Youth Voice section, a candid article by hospital Doctor Amelia Cussions on the climate and ecological emergency, plus the latest news and comment pieces.

The first issue of the newspaper proved so popular that original documents are being requested in Canada and the US so that rebels can print the newspaper there. Copies have also been requested by people in Norway, Finland and Amsterdam.

The response to The Hourglass from the public has been overwhelming, with many individuals thanking the newspaper team for frank climate reporting, and asking to donate money to future editions. Some of the feedback received from readers can be seen on the Letters page (page 14) of the newspaper. The second issue has four further pages of content than the first, bringing the newspaper to 16 pages in total now.

Distribution coordinator Angus Barr, said “The Hourglass arises out of the urgent need for journalism to give the emerging climate and ecological crisis its due weight on a planet that, scientists and sociologists agree, is becoming increasingly incompatible with human civilisation. In doing so it hopes to raise awareness among the public and offer solutions to the challenges ahead.”

Copies of The Hourglass have also been officially stored in the British Library.

For The Hourglass team: hourglass@rebellion.earth