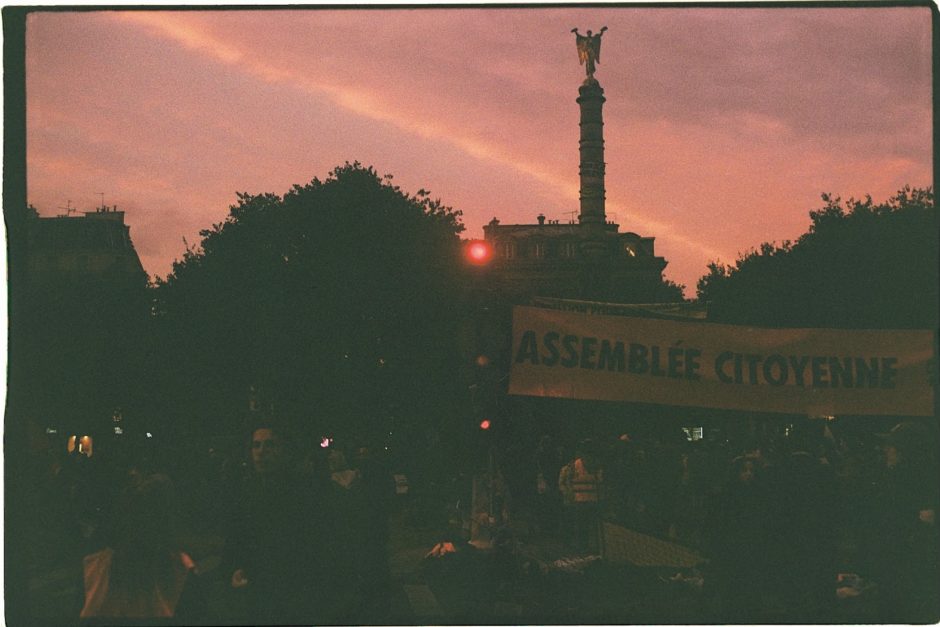 Shocks to Political Culture in France

Text and images by Victor Chaix

The October Rebellion enabled XR to introduce itself to the French mediatic and political world, and a large part of the population. This spectacular introduction, in turn, intended to draw more rebels in and swell the ranks of the country, to allow for even more disruptive and dramatic actions.

Nevertheless, we can without much worry argue that this week of massive non-violent civil disobedience created a certain shock wave in the political and militant sphere of the country of “La Grande Révolution” – a cultural strangeness in the movement’s political aims and methods for much of current contestation movements in France, and in particular the radical left.

This relative dissension between XR and more “traditional” methods of contestations in the country, as well as political message, drew during the week a couple of critiques and recommendations from both social or anti-authoritarian movements and public commentators or intellectuals alike, which deserve to be heard and thought-through, even if they sometimes reveal a certain reactionary attitude within the French left itself.

In my view, these critiques in strategy could reveal themselves to be at once very useful for the movement’s maturing here in France, and on the other side, a fruitful disruption and inspiration for the other social movements of the country, which are in growing need of a change in tactics. As such, the October Rebellion offers an opportunity for both XR France and movements such as the Yellow Vest to grow more impactful, both in strategy and political aims or message.

Having initiated the process of movement convergence and alliances in the first days of the rebellion, now is the time to reflect on how to concord more successfully with one another.

A first general critique concerned XR’s strategy itself. Our principle of absolute non-violence, for many, constituted a certain violence in itself – both denying people of colour or from the suburb’s differential treatment by the police, and untolerating other modes of demonstration. That some rebels or peacekeepers erased some graffitis that were judged to be too offensive or conflictual with the police was especially frowned upon.

I believe that these critiques had a point, at least in that our principle of non-violence, though immutable, should not make us forget the structural police violence and racism against a certain strain of the population: an injustice that should be reminded more often, if not in everything we do at XR. Moreover, this principle should not make us “cops” of the correct demonstration method – our own strategy, to be more inclusive of other movements (at least in France) should be more flexible by tolerating, at least, methods that are more confrontational. That does not mean that we should implement them, in any way, but at solely accept that in coordinated actions with other movements different tactics are used and they all have their own particular reasons and merits.

On the other hand, we at XR have certainly showcased to other movements the value of non-violent occupations, in that it creates in the very means of protest the objectives we want to reach. This very constructive characteristic outflows directly from Gandhi’s saying that we should ‘be the world [we] want to see’. Indeed, violence isn’t a neutral tool and inevitably has an influence over any movement: it tends to divert it, with time, from its democratic aims. To persevere in love enables the pacific goals of the movement to remain possible – blurring the arbitrary frontier between means and ends.

A second general critique targeted the political message and objectives of XR. It was argued, by a historian of revolutions notably, that the political message of the movement was too vague, if not even conciliant with the status quo. As such, our demands were argued to not be clearly “anti-capitalistic” or anti-systemic, which would be an issue if our goal is to radically transform our socio-political and economic structures.

I believe that this critique is essentially misguided in the sense that the very action of occupying the heart of Paris for five days and displaying to the country an alternative way of living together – regular general assemblies during the day, free food from the cantines, a natural and perpetual sharing of both resources and knowledge – that was in itself intensely political in its message, and in my view created an alternative vision of our currently atomised society, and vertical process of decision. Even if we might be clearer and more assertive in our demand for a radical systemic change, we should remind our detractors how our message goes beyond words and in the actions themselves. On the other hand, that does not prevent us to intellectually point out who – or what – the enemy is: an unfair system not just for the environment, but also for the people it is supposed to serve and the minority groups it is supposed to integrate.

France has a famous historical tradition of holding more turbulent and offensive demonstrations. On the contrary, non-violent civil disobedience is a tradition that historically belongs to neighbours across the Atlantic and across the Channel, in the hands of Henry David Thoreau and the Civil Rights or Suffragettes movement. Such a massive operation of civil disobedience in France as the October Rebellion as such raised interrogations, stemming in many ways from a clash of political cultures.

Yet, in the face of the task ahead of us – an opponent that is at once systemic, pervasive and incredibly rigid – and in order to save ourselves from both “the end of the month” and “the end of the world”, we might together concede, ego and pride aside, that we will need the full spectrum of tactics to reach our same goal: dismantle the toxic structures at the origin of our contemporary urgencies.