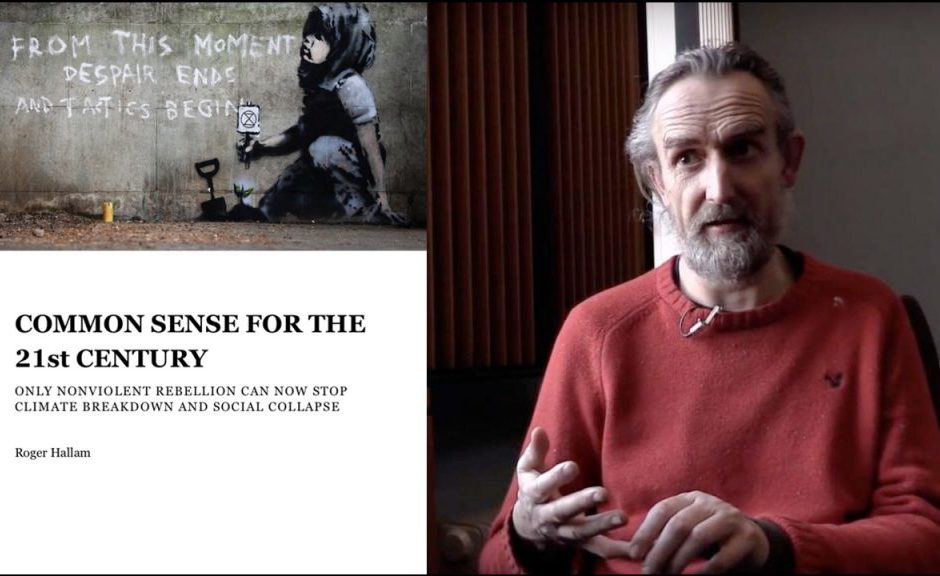 Roger has been on remand at Wormwood Scrubs since 16 September for charges relating to the Heathrow Pause action: for conspiring to cause disruption at Heathrow Airport.

At the time, Roger said in court: “Heathrow expansion constitutes a crime against humanity, against the next generation.”

To confirm, Heathrow Pause was not an Extinction Rebellion action.

During Roger’s time in prison, his words and thinking continue to spread around the world.  Published recently in the UK, Australia and New Zealand (Booktopia) it is soon to be widely available in the USA (Chelsea Green) with a release date of December 5th 2020. #CS21C will also be published in Germany (Ullstein) and France (Tana). An ebook is available.

Common Sense for the 21st Century is the manifesto and A-Z of the theory and practice of  nonviolent rebellion; the history of Civil Disobedience movements, the Theory of Change, Action development, Dilemma Actions, reverse engineering, Citizens’ and People’s  Assemblies, Framing and Messaging, themes for Transition, the Why Where and How. It is the hard talk in an 80 page booklet.

The book can be downloaded from rogerhallam.com. Bookshops and online (Hive and all the usual) £6 ISBN 9781527246744. Bulk and Retail from Turnaround Publisher Services orders@turnaround-uk.com

George Monbiot said: “Brilliant: wise, profound and persuasive. I think that [Roger Hallam]’s pamphlet will come to be recognised as a classic of political theory. Like Thomas Paine’s, it has the virtues of clarity and simplicity, while equipping us with the courage to respond effectively.”

Paul Mason, author of Why It’s Kicking Off Everywhere (Verso, 2013) and Postcapitalism (Penguin, 2016): “Common Sense is not just an argument, it is an instruction manual for ripping through the corruption and complacency that will destroy our planet”