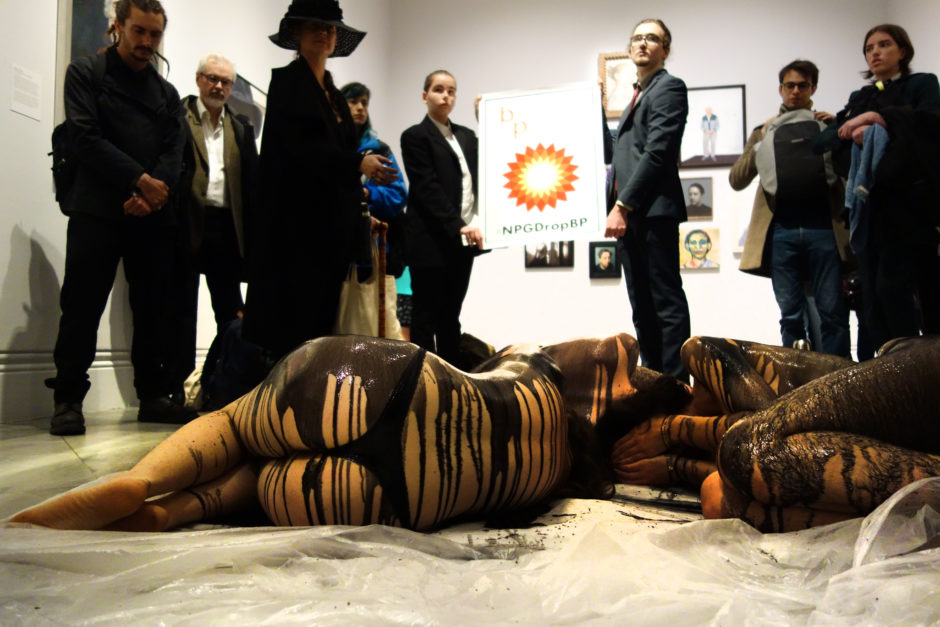 On Sunday 20th October at the National Portrait Gallery in London activists from several groups campaigning against BP’s sponsorship in the arts sector, engaged in a dramatic peaceful performance art action, drawing attention to BP arts sponsorships as means of washing their actions and image, by creating a ‘social licence to operate’.

This year is the marks 30 years of the BP portrait awards. Activists want to mark the end of this years BP Portrait Awards exhibition at the National Portrait Gallery by doing an intimate action. The gallery visitors will end their weekend in style by enjoying an oily activism performance while visiting world-class exhibitions.

This action draws awareness to the violent fate suffered by the people from frontline communities around the world, including Indigenous communities in Argentina (opposing fracking in Patagonia), West Papua (opposing its support for the repressive Indonesian military), and Canada (opposing tar sands extraction).

In the performance three activists undressed and curled on the floor in the fetal position while three other activists dressed in suits poured fake crude oil over their naked bodies, while simultaneously a letter was read. With this piece we want to show the fragility and destruction of life by fossil fuel industries be it through drills or spills.

Blythe Pepino, 30, London, music artist “As the founder of BirthStrike I am in full support of the Extinction Rebellion action at the National Portrait Gallery. BirthStrike represents a growing group of young adults now too frightened to bring children into the world because of companies like BP have worked to undermine the seriousness of the crisis as well as the action needed to mitigate it for more than half a century. BP is, right now, contributing to the destruction of peoples and planet and their tokenistic funding of the arts, which functions as propaganda, must be stopped. Our cultural sector has a responsibility to Tell The Truth.”

James Fox (fake oil pourer), wildlife biologist, 25, from London “As an undergraduate Zoologist I studied oil spill ecotoxicology for my dissertation, with a particular focus on BP’s Deepwater Horizon disaster. Specifically, our research group uncovered how a crude oil chemical called Phenanthrene – now found literally everywhere in the world due to fossil fuel exploration, including on vegetables – breaks down the functioning of heart cells, weakens animals and makes them succumb to parasites, even at low doses. The results of oil exploration are sickening. I’m here as an activist now because no amount of research will make BP stop drilling – only economic and political disruption will. Cultural whitewashing is just one of the ways oil giants like BP maintain their social license to operate. It’s high time that was revoked, as publicly as possible.”

At the end of the two weeks rebellion, this action follows an action on Friday in front of the BP headquarters where Vivienne Westwood and her son Joe Corré joined West Papuan independence leader Benny Wenda in protest for the burning of the second biggest rainforest in the world.

The performance action is reminiscent of the 2011 performance ‘Human Cost’ by art collective Liberate Tate who poured oil over a male nude in Tate Britain in opposition to BP sponsorship on the first anniversary of the tragic Deepwater Horizon disaster. They won their campaign in 2016 when Tate parted company with BP. Tate has now declared a climate emergency. Most recently, activist theatre group BP or not BP? blockaded the entrances to the BP Portrait Award ceremony in June forcing VIP guests to climb over a wall, and earlier this month celebrated a successful campaign win when the Royal Shakespeare Company dropped BP as a sponsor.

BP is 6th on the list the top 20 firms behind a third of all carbon emissions. It made £5.6 billion in profit last year – yet still receive tax credits worth £134million. That meant it was a net receiver of tax money in the UK, rather than contributing to the cost of running the country where its shares are listed. It is a powerful lobbyist in favour of the continued use of fossil fuels, topping the list of firms obstructing climate action in Europe. BP is also responsible for the worst oil spill in US history, which killed 11 people and took a heavy toll on local communities and the environment, the tragic Deepwater Horizon disaster.

Such sponsorships legitimize their operations to keep expanding at a time of climate crisis and shut down the calls for environmental justice for the communities who live on the frontline of their destructive operations. The arts world needs to refuse to launder the image of BP and other oil companies.

The gallery’s 2015 Ethical Fundraising Policy states the following – “we have a responsibility to ensure donations are not accepted from questionable or inappropriate sources”, including where support is deemed to be “in conflict with the objectives and values of the gallery”.

The gallery should not have a BP employee on the award’s judging panel, and the gallery trustees should refer BP’s sponsorship of the next year’s award to its recently established ethics committee.