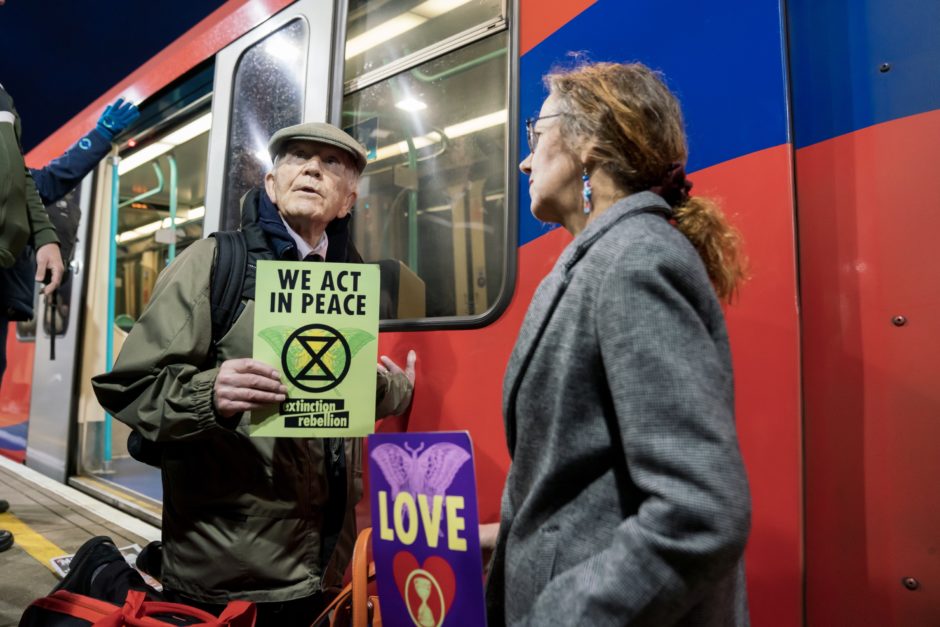 It is regrettable that there was violence at today’s action at Canning Town tube station. We would like to express our sadness that events escalated this way.

We are aware that one of our activists responded in self defence in a moment of panic when confronted by a threatening situation. He acknowledges his accountability for this action and we offer gratitude for members of the public who helped to protect him.

To those that engaged in violence, we acknowledge that we disrupted your life today.

Rather than let this incident divide – at this moment of heightened attention – we think it is right to reach out to you, to invite you to have a conversation about what happened today. [1]

In light of today’s events, Extinction Rebellion will be looking at ways to bring people together rather than create an unnecessary division.

The people involved today did not take this action lightly. They were a grandfather, an ex-buddhist teacher, a vicar and a former GP among others who acted out of rational fear for the future as this crisis deepens.

We are aware that this action was divisive. We are a broad and diverse movement with a wide range of views, and are aware that many people were not for this action. Those that acted this morning planned their action autonomously, within Extinction Rebellion’s principles and values, centred around nonviolence and compassion.

Extinction Rebellion remains fully committed to nonviolence and will continue to put ourselves in vulnerable situations to highlight the climate and ecological emergency we face. It is unfortunate that something like this has to happen for this to become ‘newsworthy’.

This follows 10 days of peaceful actions in London. Extinction Rebellion’s supporters are ordinary people who are trying desperately to preserve the safety and security of all life on earth.