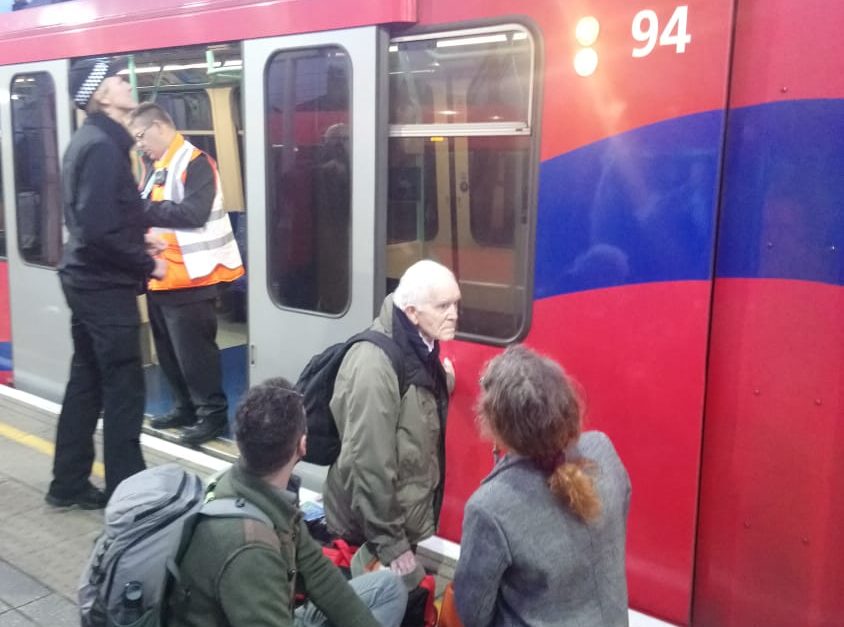 How would you act if you knew there was an emergency and the Government wasn’t acting on it? Would you do something proportionate to the emergency to raise the alarm?

This morning (Thursday 17 October) a number of Extinction Rebellion UK affinity groups are peacefully disrupting the London Underground because there is an Emergency. The Climate and Ecological Emergency. Activists are glued-on to trains in order to prevent them from running and plan on nonviolently breaking the law, then waiting to be removed and arrested by the British Transport Police.

This is a move not taken lightly and which they’d prefer not to take. It is taken to alert people to the inaction of the British Government in the face of the Climate and Ecological Emergency.

It is an urgent plea for the Government to stop misleading the British public on the reality we all face. 2050 is far too late, the effects of the Emergency are coming sooner than predicted and accelerating. Let’s not rely on techno-fixes that aren’t invented yet, engage in creative carbon taxes accounting, let’s not gamble with our children’s future. Now is the chance for the Government to demonstrate to the world that Britain can be a true leader.

Members of the group taking today’s action said: “GOVERNMENT PLEASE TELL THE TRUTH on the Climate and Ecological Emergency. We are at the end of the business as usual line, it is time to stop harming the world in which we live and begin the process of repair. You have a duty to protect the people of the UK and you are not doing that. You know what we are facing but you are not being honest with the British public, you are being selective with the truth and timeframe.

“We are scared and DO NOT want to have to resort to this. Please do not ignore the canaries, the lives of current and future generations depend on what you do now. Let’s come together and face this, the time for transformational change is now.”

As with Extinction Rebellion actions that block roads, the action is intended to cause economic disruption and thereby convince the Government to agree to Extinction Rebellion UK’s three demands of telling the truth, acting now to halt biodiversity loss and reduce greenhouse gas emissions to net zero by 2025, plus creating and be led by the decisions of a Citizens’ Assembly on climate and ecological justice.

As many people who work in central London get there by tube, disrupting this will have a substantial impact upon business within the capital. Actions of this scale are commensurate to the task of creating change on a societal level.

Robin Boardman, 21, a spokesperson for the group said: “We have known since at least the 1980’s that we need to change our ways or risk a climate and ecological disaster but still our Government is intent upon making matters worse. It pains me to read the reports that they knew this would happen before I was even born.

“If this is what it takes to make them take notice before it is too late, then this is what we must do. None of us want to inconvenience ordinary people. That’s why we’re doing this in the morning when it will impact business as usual, and not in the evening, when people want to get home to be with their loved ones.”

People taking part in the actions are aware that this may result in their imprisonment and are willing to make this sacrifice in order to sound the alarm about the Climate and Ecological Emergency (CEE). They view it as an act of conscience, borne of necessity in the face of an impending disaster that threatens everybody and all life on the planet.

Spokesperson, Valerie Milner-Brown said: “This is disruption with a purpose since we will all encounter far greater disruption in the future if we don’t radically change our society. We can already see the horrifying early effects of the Climate and Ecological Emergency in parts of the Global South and it’s clear that this will be coming our way soon.

“Government needs to start taking seriously the deep concerns of tens of thousands of experts and scientists globally, so that we can create a society that is built to put resilience and community before profit.”

Safety measures were built into the action design to minimise the risk of people being trapped underground. In addition, the Police were informed that there would be a number of actions.

The actions form part of an ongoing campaign intended to increase pressure upon the Government. In April, people focused on the Docklands Light Railway at Canary Wharf, creating iconic images and film footage that were seen around the world. These latest actions may be seen as a continuation of the same campaign, due to continued Government inaction.