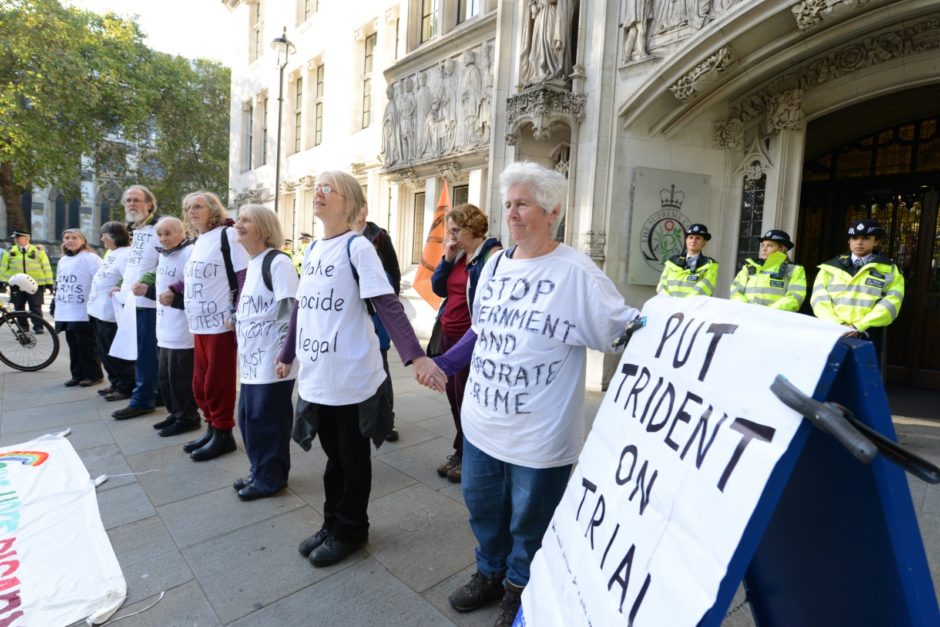 XR Peace has today joined with other anti-arms trade activists to stage a day of action targeting key players in the polluting, oppressive arms industry.

Militaries around the world are major polluters and are often exempt from international climate agreements on reducing carbon emissions. The US military by many measurements is the world’s biggest institutional consumer of petroleum and emitter of greenhouse gas and other pollutants.

A spokesperson for XR Peace said: “The existing geopolitical tensions – that climate breakdown will only increase – are lucrative opportunities for the arms trade, and ones it seeks to capitalise on. The arms trade is not just an active participant in climate change through its massive carbon footprint but is a direct barrier towards a transition to a fairer world, based on principles of ecology and cooperation.”

Eight members of XR Peace have super-glued themselves together outside the Supreme Court, including Eric Levy (91 years old, fourth from left). Credit: Gareth Morris

A statement from XR Peace: “How are fossil fuels being captured and their resources controlled? How are governments protecting corporate economic interest abroad? How are indigenous and local communities, whose lands are rich with fossil fuels, being displaced or strong-armed by governments – governments who service corporate interests over human life? How are popular movements against this extractive capitalist system repressed? As environmental disasters and atrocities of war continue to displace millions, how do racist governments control their borders?”

“Through the use of arms and subsequent violence; facilitating, sustaining and profiting the industrial military complex.

“The fossil fuel and arms industries feed off each other – creating massive wealth for a minute number at the cost of millions of lives, besides the devastating urban and ecological destruction.

“This is a market based on devastation. It must be stopped. Whilst there are guaranteed profits emanating from this horrific system, there can be no genuine will to change it from within a capitalist framework. That is why we must rise up as concerned citizens to take direct action.

“The existing geopolitical tensions – that climate breakdown will only increase – are lucrative opportunities for the arms trade, and ones that it seeks to capitalise on. The arms lobby is a serious and powerful entity and it will use this power to influence political circles to see that its interests are met. Thus, the arms trade is not just an active participant in climate change through its massive carbon footprint, but it is a direct barrier towards a transition to a fairer world. A world based on principles of ecology and cooperation.

“If we are to attempt to turn around the already devastating impact of climate change, as well as seek justice for those who have already suffered far too much, we must stop the arms trade.

“We take action today to put a tangible spanner in the works of the arms industry and to stand in active solidarity and resistance with all people all over the world who are suffering and fighting back against the violence of occupation and war. The bombs fall elsewhere but they are built here and so, too, must be our resistance.”

2. For the campaign for a Convention on Ecocide see: https://stopecocide.earth

3. On 20 June 2019, the Court of Appeal ruled that UK arms sales to Saudi Arabia for use in Yemen are unlawful. The judgment also accused ministers of ignoring whether airstrikes killing Yemeni civilians are in breach of international humanitarian law.

4. Although the Government committed to suspend any new arms sales while conducting a review; Liz Truss, the Secretary of State for International Trade admitted in September that the court order had already been breached three times.