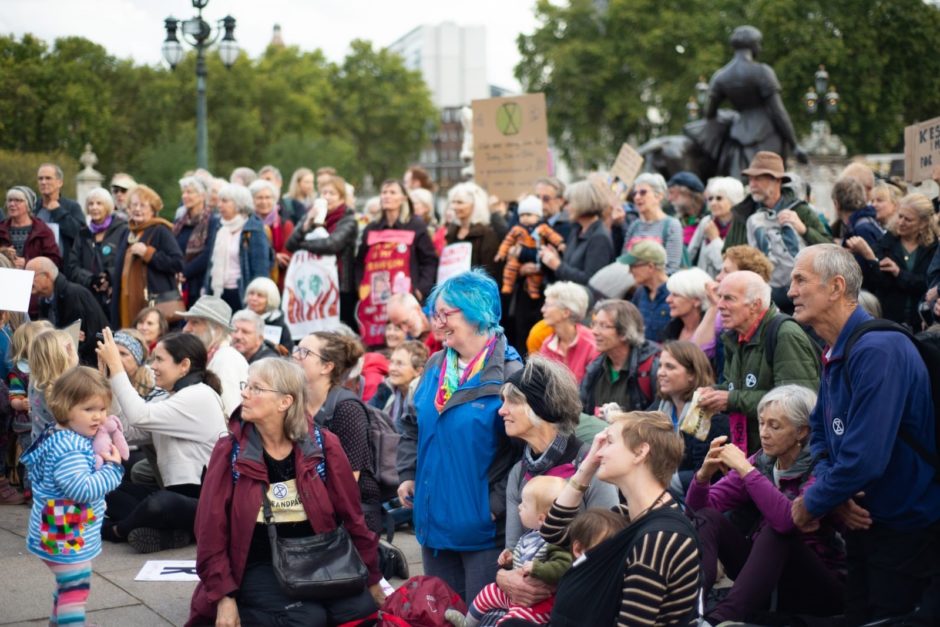 Tuesday saw a flurry of activity from rebels in London, who responded with renewed vigour and momentum following the divisive blanket protest ban by police.

As many prominent lawyers, politicians, human rights charities, and others publicly criticised this attempt to undermine the right to peaceful protest, media across the globe put Extinction Rebellion firmly back on the front pages – The Guardian, Daily Mail, CNN, Bloomberg, BBC, The Telegraph, The Week, Sky News, Huff Post, Yahoo, Vice, France 24, Deutsche Welle, Evening Standard … the list goes on and on.

The response towards the crackdown on XR protestors was wide ranging. The Guardian covered how Liberty described it as an ‘assault on the right to protest’.

Labour politicians like Diane Abbott and Clive Lewis strongly condemned the police action; the former saying it was ‘completely contrary’ to British traditions of ‘speech and the right to protest’, the latter describing it as a ‘huge overreach of statutory power’.

Priti Patel responded on Twitter, saying Labour ‘support the law breakers who have disrupted the lives and business of Londoners’.

What began as an attempt to silence XR, may actually have immeasurably ramped up our debates and conversations with politicians.  US magazine The Nation described how it was ‘staggering to watch representatives from Britain’s four major parties curry favour with a movement with a set of demands so stringent’, while the BBC reported how XR protestors were invited to speak with the Welsh government.

After the painful last-minute eviction from the Trafalgar Square site (the one area which police originally specified that XR should use) rebels seamlessly ‘flowed like water’ into other areas and other actions.

Gail Bradbrook’s ‘noble art of window smashing’ achieved major coverage.  Her attempt to smash through the Ministry of Transport’s window with a screwdriver brought great publicity to the fight against HS2.  The actions highlighted below benefited similarly from today’s media frenzy.

In seeking to stifle us, the police breathed new life into our rebellion across the globe.

Our grandparents are the people who have the ability to use their wisdom and knowledge to safeguard future generations, and a unique opportunity to take their place in history to ensure the continuation of history.

Yesterday at 4:30PM, XR Grandparents was launched for the first time outside Buckingham Palace. The air was filled with music and chants of “I’d rather be a crusty than extinct”, followed by two arrests of women lying at the palace gates.

The action was concluded with a candle-lit vigil at Trafalgar to highlight the death of democracy.

Millbank saw about 300 lovely rebels causing some peaceful chaos for ‘NO FOOD NO FUTURE’ – an action highlighting the climate and ecological crisis’ effect on food and security.

A few rebels locked onto a caravan, with arrests happening throughout the day in a slow manner. Overall, the site remained peaceful and relaxed as Extinction Rebellion continued to practice non-violent direct action.

After the brutal wrapping up of frivolities last night where the police finally cleared the last of everything around 2am, a cohort of MEPS, Greens and 100 rebels staged a very calm protest on the steps of the square.

It was a fitting way to wrap up the unexpected eviction with love and solidarity on all sides.

Bristol Comic and impersonator Pete the Temp posed as ‘Boris Johnson’, allowing himself to be kidnapped on an Extinction Rebellion ‘pirate’ ship on the Thames. The stunt was visible from Westminster Bridge.

The ‘PM’ was accompanied by a sound system and a microphone to make an important announcement: “I have been abducted by uncooperative crusties who held me hostage in a bivouac…. Today I will announce my plans to scrap airport expansion, halt all fossil fuels and invest in renewable energy before it’s too late.

“I implore the good people of this country to be pro-rogue and support these tofu-chewing crusties.”

Though this was not an officially organised XR action, it was much needed satirical humour for a Tuesday afternoon!

We Are All Crew

The #BristolBlocks installation outside the Tate Modern.

Tuesday morning kicked off with a group of Bristol rebels installing 34 beautiful building blocks emblazoned with the words ‘ACT NOW’ outside the Tate Modern Gallery in London.

The group gathered outside the Tate at 7am to begin building the structure. By 11am, 80 police officers had arrived on the scene to remove the blocks, despite them being on Tate premises and the Director of the Tate thanking the group for being there.

Eight rebels courageously sat on top of the blocks to keep them for as long as possible, with five glued on.

Ruby Pugh from Extinction Rebellion Bristol said: “We are here peacefully, and calmly. This is a non-disruptive art installation, highlighting how every person is a building block of this rebellion, and every person has a vital role to play in building a better world. The public are enjoying the art and we are disappointed at the police’s overreaction to our peaceful, non-violent, non-disruptive outreach.

“We are here because the Tate declared a climate emergency earlier this year, which is the first step to solving this crisis we’re in, and we’re celebrating that step.”

The police have now detained the blocks as evidence, however the Tate is keen to keep the colourful banners as art.

The London Metropolitan Police decided to clear rebels out of Vauxhall Pleasure Gardens – which was only to be expected, as any time the powerful are called out for their actions, they will inevitably use the instruments of state violence to suppress it.

It is also hardly a surprise that this started on the night after we began protesting the banks – the engine houses fuelling and accelerating climate catastrophe.

Many XR protesters will have been rightfully outraged by the actions of the police over the last 10 days. Whether the pre-emptive seizure of equipment, including access equipment for our XR Disabled Rebels friends or the forceful arrest of Rabbi Jeffrey Newman at Bank yesterday. And we all have every reason to be outraged at such acts of disregard for decency and dignity.

Yet we have to realise that these are the kinds of actions, often far worse, that are inflicted upon vulnerable communities in the UK every day. People were shocked at the police turfing families from Trafalgar Square at night yesterday. Immigration raids have been doing this for years.

It does not matter if individual police officers are sympathetic to XR’s cause. When the order comes to protect the centres of power and capital, that is what they will have to do. That is why the police, as an institution, exists.

One thing is certain, however. We saw an incredible space emerge, on the streets, in the tents and here online, over the past few days, for listening, sharing, learning and protesting.

We can see that there is a real desire for these conversations to take place, both from within XR and beyond, to build a movement of solidarity that is based on internationalism, intersectionality, and justice.

This site has nothing but love for the folks at XR Liberation, XR Scotland, XR Slough and all the other groups fighting the good fight and facilitating true self-reflection and transformation within XR.

This is not to mention groups like War on Want, Phulbari Solidarity Group, Stop the Maangamizi Campaign, Green Anti-Capitalist Front, Wretched of the Earth, RAPAR, Fuel Poverty Action, BiofuelWatch, London Mining Network and many more who have been drawing the links between climate change, capitalism and colonialism for many years.

In one form or another, these conversations will continue. Even if the big marquee is no longer there, we know that the space it created will not die any time soon. We will be back in the near future with much more, so keep watching this space for more.

Save our Planet: Save our Right to Peaceful Protest

Extinction Rebellion will hold a historic mass civil disobedience action. Following the decision to ban peaceful protest in London, we are calling on everyone to assemble in Trafalgar Square to defend our civil liberties.

We’ll be holding an Emergency People’s Assembly in Trafalgar Square at 13.30pm to ask the question: “how do we respond to the silence of the Government on Climate & Ecological Emergency, in the face of the attempt by the Metropolitan Police to silence people, with a London wide ban on our peaceful assembly?”

George Monbiot, other celebrities and politicians have been invited to attend and protect our democratic right to peaceful assembly.

“Today I’m here as XR Muslims, one of the groups that I’ve been co-ordinating as part of the Faith Bridge of all different faiths coming together – Muslims, Christians, Hindus, Jews and Buddhists.

XR Muslims is very recent, and it’s building slowly. We had a People’s Assembly where we had some speakers on Islam and climate justice, and what Islam has to offer the climate justice movement. We had an Imam on another day come and speak and I’ve done the call to Prayer from Trafalgar Square.

Part of XR Muslims’ mandate is to for us to come together as people of this land who have a Muslim identity and explore what we have to say around that.”

“I’m compelled to be here at the launch of XR Grandparents at Buckingham Palace for the sake of my grandchildren.

I have three grandchildren who are 4, 7 and 10, and they shouldn’t have to know at their ages about the planet in crisis. They should be learning to love the planet and all animals, and we have to speak for them.

It’s so serious, and I feel that the government is failing in their responsibility, in their duty of care, to look after the children of coming generations.

They declared a climate emergency under Theresa May, but they’ve done nothing, absolutely nothing to really change things.”

“I had multiple chats with the police while I was covering the XR protests. I have a massive respect for the Metropolitan Police and what they do.

But some things I didn’t understand is that most of them said they understood why we were protesting. Why this is urgent. What will happen if the government doesn’t act on time.

But although they had their views which were coinciding with that of the protestors. They have a moral and obligatory duty to end these protests because their job says so.

I met a few ex-policemen who were protesting as well and who left their jobs because they were too fed up of the fraudulent system that they were serving.

This raises serious concern about the government, the system and how truth is shut down and facts are neglected by those in power and police who are just individuals like you and me who are serving this system that lies to people.

The system which should be for our benefit is turning against us and making us fight within ourselves for their political gains.

I hope all of us don’t become too naive and say that’s how governments work. It’s our job to rise up and ask questions when the system fails. Otherwise, aren’t we all just sheep in a big field following the orders of our owners? Aren’t we just slaves to whoever is in power?

Being a part of the democracy gives us immense rights, which we take for granted. Let’s not take this for granted anymore.