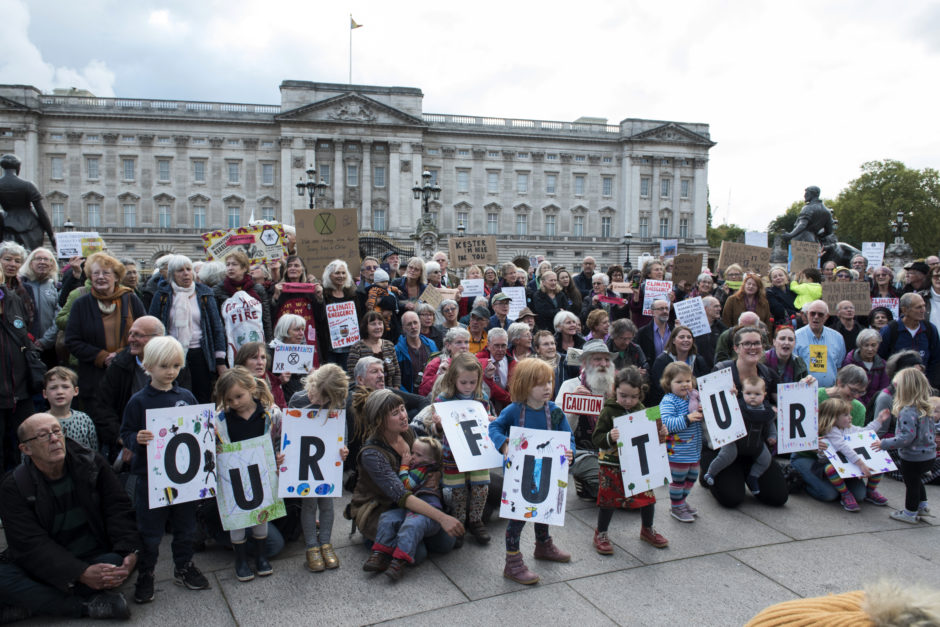 Grandparents unite to protect the planet

On Tuesday 15 October, over a hundred grandparents came together under the name of Extinction Rebellion Grandparents to protect the futures of their grandchildren and of children around the world.

The group gathered on the steps of the Queen Victoria Memorial Statue outside Buckingham Palace, many of them holding photographs and placards dedicated to the children for whom they are taking action. Together with some of their grandchildren, they stood and sang songs calling for climate justice. Sam Lee, of the Nest Collective, lead the group in singing a his reworked version of A Nightingale Sang in Berkley Square.

Extinction Rebellion Grandparents addressed Her Majesty the Queen as a fellow grandparent, saying :

“Towards the end of our lives, we are coming together with courage and commitment so that we can be of service to the future, to those precious grandchildren who are here with us today, and to children worldwide who are already suffering.

The time is now, and this is our time. It is our duty to act. We are stepping forward as grandparents to protect the living planet that we all call home.”

The group brings together people with long histories of activism with those taking action for the first time through their involvement with XR.

Hazel Mason who is a member of XR Barnet and who organised the launch said:

“If you’d told me a year ago that I would one day be arrested for civil disobedience, I would not have believed you. But seeing that no amount of lobbying, campaigning or marching has had any effect on government policy, I feel I have a moral obligation to step forward in whatever way I can.  As older people, we have far less to lose if we are arrested. We are the generation who have lived through an era of the greatest consumerism, and are responsible for the greatest increase in CO2 emissions. Even though many of us have done that unwittingly, we need to make a sacrifice for future generations. By comparison to the loss of our planet, what else matters?”

Satnam Kaur Khalsa, 63, a grandmother from Hounslow, who came with her daughter and grandchildren said:

“The Government needs to change their policy. I want to help make sure there is a place for these children to live and prosper. Like we had an opportunity to when we were young. We could plan our future. Their future is murky at the moment, they don’t know what’s going to happen. We didn’t really think of the consequences.”

Susie, grandmother of three from London, is one of Extinction Rebellion’s wellbeing coordinators. She welcomed the formation of XR Grandparents, and spoke of her involvement with XR saying:

“Nothing’s been like this, there’s been no sense of urgency like now and I suddenly realised I couldn’t not do this. Once I realised the urgency, there was no question in my mind that I could do anything else.
It was really nice to meet a lot of grandparents who are involved, we are all here for that particular reason – our children, our grandchildren, the future – as well as other species, other countries, indigenous peoples, and a sense of shared humanity and a shared natural world.”

Grandmother of 3, Sarah, said she felt compelled to be at the launch of XR Grandparents for the sake of her grandchildren. She said:

“I have three grandchildren who are 4, 7 and 10, and they shouldn’t have to know at their ages about the planet in crisis. They should be learning to love the planet and all animals, and we have to speak for them.

It’s so serious, and I feel that the Government is failing in their responsibility, in their duty of care, to look after the children of coming generations. They declared a climate emergency under Theresa May, but they’ve done nothing, absolutely nothing to really change things.”

Clair Chapwell, 67, said she was happy to be at the launch with like-minded people from different walks of life.

“I’m so happy to be here. It’s been so friendly and passionate and warm with people who understand each other in a really passionate way, even though they’ve never met. And funny: Laurie is going around making policemen laugh and they’re desperate to. Because in some way they’re with us, I really believe that“

“It’s been a lovely event. The highlight for me was seeing so many people turning out, and that people came a distance and seeing the nice reaction from the public. I’m a bit disappointed her Majesty didn’t come out and join us though.”