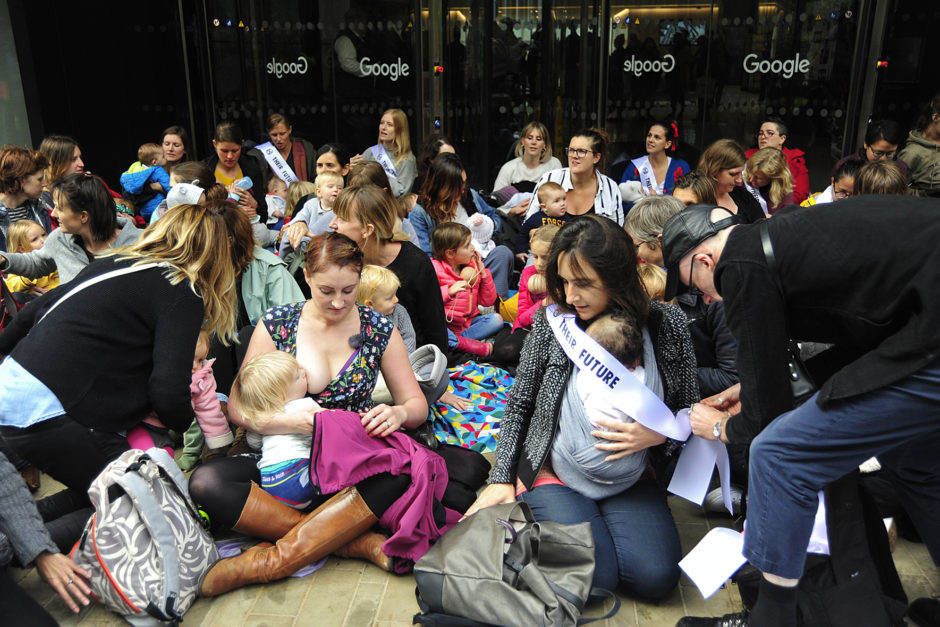 “As soon as you’re born they make you feel small, by giving you no time instead of it all, ’til the pain is so big you feel nothing at all
…When they’ve tortured and scared you for twenty odd years then they expect you to pick a career”
John Lennon

Extinction Rebellion mothers and babies have blockaded Google HQ in London over their donations to climate change deniers. The action started with around 100 mothers and babies blockading one side of the building by staging a mass feed-in. They wore white sashes emblazened with the words ‘their future’ and sang the protest hymn ‘We are loving in the light of truth’ while they fed their babies. A group of mothers held the banner with Google’s company motto “do the right thing”.

The action seeks to highlight recent revelations that Google has been giving donations to organisations which have campaigned against environmental legislation and questioned the science behind the climate crisis.

Lorna Greenwood, a former Government Employment Lawyer and mother of two, said: “Google has been touting its green credentials to the public while at the same time giving money to climate change deniers. It’s a terrible betrayal of the children who have suffered all over the world because of the climate and ecological emergency.

We’re asking Google to use its enormous power for good instead of evil. Its company motto is ‘do the right thing’. The right thing to do could not be more obvious: stop funding climate deniers.

This is also a rallying cry to mothers all over the world. If you can, go all together with your babies to the politicians and businesses destroying your children’s future and tell them to stop. Don’t bury your head in the sand or wait for someone else to do it.  They won’t and they can’t. It has to be you. “

A recent Guardian investigation found that Google has made donations to more than a dozen organisations in the US that have campaigned against climate legislation, questioned the need for action or sought to roll back environmental protections. The list includes the Competitive Enterprise Institute, a conservative policy group that was instrumental in convincing the Trump administration to abandon the Paris agreement.

At the same time, Google has made public commitments to improve its green credentials. Just a few weeks ago, Google said it would make the “biggest corporate purchase of renewable energy in history”.

Charlotte Phillips, mother of two, said: “Google knows that the climate crisis is real and it shouldn’t be supporting companies that promote climate change denial. Google’s employees should demand that the company they work for does not support lies. As a mother of two girls, ages 4 years and 6 months, I’m standing in solidarity with mothers all over the world whose children are already being affected by climate change and I am acting now for my family and future generations.”

Shortly after XR Youth climbed on top of the entrance to the YouTube Space in London Kings Cross and dropped a banner reading ‘YouTube Stop Platforming Climate Denial’. The group of 5 young people then delivered a letter to the employees of the video-sharing platform. [1] The action calls on YouTube, a platform widely used as an information source for teenagers, to stop platforming content which casts doubt over the scientific consensus on human caused climate change.

According to Dr. Joachim Allgaier, Senior Researcher at the RWTH Aachen University and author of study published in July 2019 into science and environmental communication on YouTube, “Searching YouTube for climate-science and climate-engineering-related terms finds fewer than half of the videos represent mainstream scientific views.” He added: “It’s alarming to find that the majority of videos propagate conspiracy theories about climate science and technology.”

Hollie Andrews, 21, spokesperson for Extinction Rebellion Youth, said: “The scale of the climate denial content on YouTube is deeply troubling. We are facing climate and ecological breakdown – we cannot afford for people to be misled by false information on an issue as serious as this. For many young people YouTube is a key source of news and information. We have the right to scientifically accurate information about a crisis which threatens our futures and is already claiming the lives of young people in the global south.

“It’s time to step up YouTube, because lives are on the line.”

You are one of the most popular social media platforms in the world with over 1.9 billion users every month. Many of these people use YouTube as an educational tool; indeed a recent survey showed that over half of teenagers in America get their news from YouTube, and as a result, the influence of your platform is indisputable.

However, when members of the public look to YouTube to inform themselves about the current climate and ecological crisis, they are confronted with videos that promote climate denial.

A large proportion of the climate-related videos on your platform contradict the worldwide scientific consensus that humans are the dominant factor that has led to the current climate and ecological crisis. This disproportionate representation of the denialist perspective can be traced back to systematic disinformation campaigns conducted by fossil fuel interests and their political allies.

Not only this but your parent company Google has made large contributions to climate denying organisations such as the Competitive Enterprise Institute.

Allowing this propaganda to be spread across such a far-reaching social media platform is not only misleading to the public, it is inherently dangerous. Carbon dioxide emissions are at unprecedented levels that have not been seen for at least 800,000 years, and as a result of this and other acts of ecocide, we have now entered the 6th mass extinction. The IPBES shows that 1 million species are at risk of extinction if we don’t change course. People are already dying all around the world. The climate and ecological crisis is on our doorstep and we must act now to rapidly decarbonise the systems in which our societies operate and break down the pillars of oppression which hold it up, only then will we create a liveable future. This is not speculation: this is the globally agreed truth as outlined in the latest IPCC report, and recognised within communities that are already experiencing the effects climate and ecological breakdown.

YouTube has tremendous potential to spread the message about the situation in which we find ourselves.

We demand that you make this platform one which tells the truth, not one which creates confusion around a subject about which there is so much certainty. This is not about censorship of individual’s freedom of speech: it’s about preventing YouTube from being exploited by fossil fuel companies seeking to warp the public debate in their favour.

YouTube has the potential to lead the way in telling the truth about the situation, and becoming a great educational tool for millions of people. .