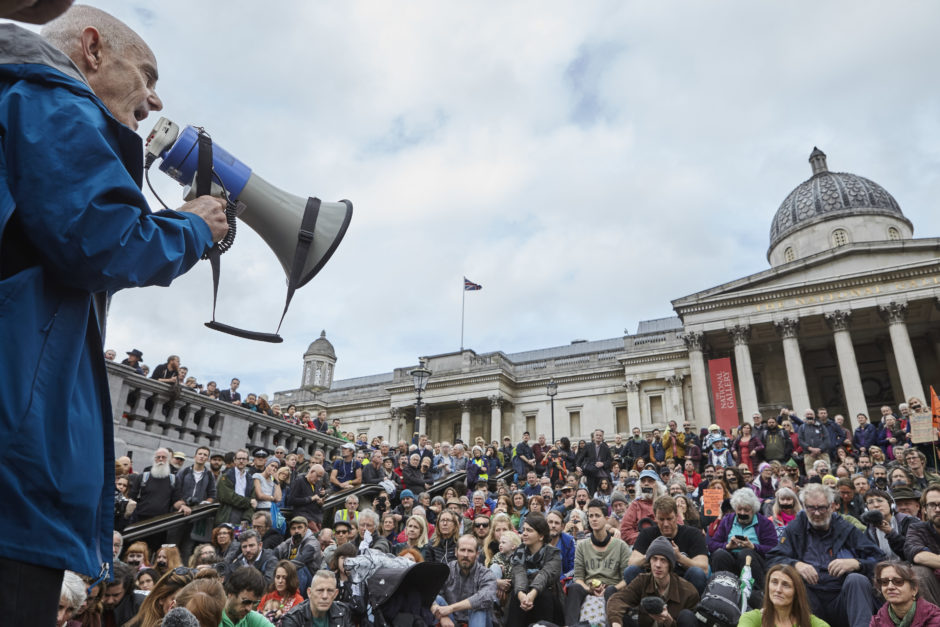 Day 9: More than 1500 defend right to peacefully assemble as Extinction Rebellion calls on the media to address the Emergency

As the second week of the International Rebellion continues, Extinction Rebellion calls on people all over the world to rise up and hold our politicians and media institutions to account over the Climate and Ecological Emergency (See below for a round-up of today’s actions).

On Thursday we will take a moment to pause and focus on training, outreach and our plans for attrition actions nationwide in the coming months following the London rebellion. We’ll be discussing deliberative democracy and Peoples’ Assemblies.

We’ll also be awaiting the outcome of two key court hearings on the Heathrow expansion and the Met’s unprecedented blanket ban on our right to peaceful protest in the city. We’ll come together to defend this right with a mass cycle swarm and meditation tomorrow evening. Read on for more information on this and other actions.

They can confiscate our possessions, but they can’t ban our right to peaceful protest and assembly. Rebels and allies came out to Trafalgar Square in their hundreds today to exercise this fundamental right, guaranteed under the European Convention of Human Rights.

Jamie Kelsey-Fry, spokesperson for Extinction Rebellion, introduced the Assembly by saying: “This is a really extraordinary situation. It’s possible that it is illegal for us to talk about the greatest crisis this species has ever known.”

A crowd of more than 1500 strong heard rousing speeches on the steps of Trafalgar Square from those including Friends of the Earth CEO Craig Bennett, who thanked XR for their message: “When the State tries to shut down free speech, we know they’ve lost the argument.”

After the speeches, the crowd split into groups of 10 to discuss the Assembly’s question: “How do we respond to the silence of the Government on the Climate & Ecological Emergency, in the face of the attempt to silence people with a London-wide ban on our peaceful assembly?”.

The atmosphere was one of strength, peace and power, with people using their voices and collectively standing together to defend peaceful assembly. Its key outcomes were:

Later, hundreds occupied Whitehall road, with no traffic flowing in either direction. Police were present in large numbers but made no active moves to arrest.

They wore white sashes emblazoned with the words “their future” and sang the protest hymn “We are loving in the light of truth” while feeding their babies.

A group of mothers held the banner with Google’s company motto, “Do the right thing”.

The action highlighted recent revelations that Google has been giving donations to organisations that have campaigned against environmental legislation and questioned the science behind the climate crisis.

Lorna Greenwood, a former Government Employment Lawyer and mother of two, said: “Google has been touting its green credentials to the public while at the same time giving money to climate change deniers. It’s a terrible betrayal of the children who have suffered all over the world because of the climate and ecological emergency.

“We’re asking Google to use its enormous power for good instead of evil. Its company motto is ‘do the right thing’. The right thing to do could not be more obvious: stop funding climate deniers.

This is also a rallying cry to mothers all over the world. If you can, go all together with your babies to the politicians and businesses destroying your children’s future and tell them to stop. Don’t bury your head in the sand or wait for someone else to do it.  They won’t and they can’t. It has to be you.”

Today XR Youth climbed on top of the entrance to the YouTube Space in London Kings Cross and dropped a banner reading ‘YouTube Stop Platforming Climate Denial’. The group of 5 young people delivered a letter to the employees of the video-sharing platform, available here.

The action called on YouTube, a platform widely used as an information source for teenagers, to stop platforming content which casts doubt over the scientific consensus on human-caused climate change.

According to Dr. Joachim Allgaier,  author of a study published in July 2019 into science and environmental communication on YouTube, “searching YouTube for climate-science and climate-engineering-related terms finds fewer than half of the videos represent mainstream scientific views.” He added: “It’s alarming to find that the majority of videos propagate conspiracy theories about climate science and technology.”

The vigil extended an invitation to Rupert Murdoch and his global media corporation “News Corp” to declare a climate and ecological emergency and to prioritise their editorial resources to tackling it.

Extinction Rebellion’s partners the Climate Media Coalition sent recorded letters to Rupert Murdoch and his son James requesting a meeting with them. Sadly, neither of them replied.

In the peaceful vigil they also mourned the wiping out of more than 60% of all wild animals, fish and amphibians since 1970, and the millions of people whom the UN have said have already died from the impacts of climate and ecological breakdown over the last decade.

Extinction Rebellion spokesperson Caspar Hughes said: “Rupert Murdoch, as the owner of one of the world’s most powerful media organisations, has a crucial opportunity to enable the public to give their political permission to the government, businesses and society at large to undertake the urgent civilisation-changing actions necessary.”

He added: “We are therefore calling on Rupert Murdoch to join our rebellion and to imagine the extraordinary legacy he could leave, by helping to save  humanity and what is left of the natural world from the emergencies that now engulf us.”

Lola Perron, spokesperson for Extinction Rebellion said: “By advocating the WW2 level of government action necessary, he could help transform Britain into a net zero-carbon economy by 2025. It is beyond time for him to stop advertising and promoting high- carbon and consumerist lifestyles. All of our media must tell the truth.”

10am – Royal Courts of Justice, the Strand – Heathrow Hearing Begins

On World Poverty Day, the Court of Appeal will begin hearing the legal challenges to Heathrow expansion. Plan B and Friends of the Earth’s claims, focussed on climate change, will be heard on 17th and 18th October.

The principal question is whether Chris Grayling was correct to consider that the Paris Agreement was “irrelevant” to his decision to approve plans for the expansion of Heathrow Airport.

Tim Crosland, Director of Plan B, said: “It’s interesting timing that the first day of the hearing should be World Poverty Day. Last year 97% of the world’s population didn’t take a flight. 80% of the world’s population have never flown. Taking a flight from London to Edinburgh produces more carbon emissions than the average person in Uganda produces in a year. A policy to expand aviation in the midst of the climate and ecological emergency is a policy to reduce the life chances of the most vulnerable to maximise the temporary convenience of the few.”

You will be able to watch a live-stream of the hearing here.

11am – Rebels Touch Down at Gatwick Airport

Rebels are taking a light-hearted party to Gatwick Airport. The airport’s owners are seeking permission to bring its standby runway into full passenger use, increasing its capacity by 20 to 30%. Creative performers will unite to remind Gatwick and the rest of the aviation industry of the urgent need to reduce flight numbers, not expand airports.

They’ll also welcome the airport’s arriving and departing passengers with the message that they can make a huge contribution to cutting emissions by limiting their travel to just essential flights.

Rebels will be handing out leaflets encouraging people to play their part in what lies ahead. There is no intention to disrupt flights.

Extinction Rebellion’s application for a judicial review of the Met’s blanket ban on protest has been accepted by the High Court for a Directions Hearing tomorrow from 2pm in Court 2. Baroness Jenny Jones, Caroline Lucas MP, Clive Lewis MP, David Drew MP, Ellie Chowns MEP, George Monbiot, and Adam Allnut are bringing the action on behalf of XR to challenge the police’s blanket ban on XR protests across the whole of London for the rest of the week.

They are arguing that a ban is an unprecedented and disproportionate curtailment of the right to free speech and free assembly which risks criminalising protest about the climate and ecological emergency in the capital. Extinction Rebellion hopes that the High Court will quash the police’s decision, ruling it unlawful.

4.30pm -The Suits Are Coming – XR Professionals march from the DWP to Trafalgar Square

Professionals will meet and march from the Department of Work and Pensions tomorrow at 4.30pm under the banner ‘Not All Crusties’, down the road to Trafalgar Square.

Rebel doctors, lawyers, farmers and scientists have already proven that Extinction Rebellion is a broad movement but up until now a loud corporate voice has been missing from the mix. We can’t be silent: the companies and brands who are our clients are doing their bit and now, those of us working for corporations are ready to speak up.

Tomorrow the ‘after work’ gang will meet in response to the Prime Minister’s dismissal of the climate protesters as ‘crusties’ who live in ‘hemp-smelling bivouacs’ (is ‘Bivouac’ a new bar in Soho?).

After-work joiners will gather on the steps of Trafalgar Square from 5.30pm. Dress code is #SuitsAndTiesAgainstEcocide.

Our right to assemble in peaceful protest is under attack. The MET have banned us from assembly – but not from marches or processions! So, tomorrow we will swarm together to form a critical mass ride when we can unfurl our flags and ride with pride around our great city in defence of our right to protest, in defence of our Right to Ride, in defence of the future of our planet.

The ride will culminate at Parliament Square where we will circle the green, flying flags for our futures. The ride will also feature a new rickshaw sound-system that will blow your ears off, featuring a well known DJ – TBA!

In a special event we will come together to celebrate our light at the heart of Extinction Rebellion, and our commitment to resilience at a critical moment in Rebellion.

After an intense fortnight of actions in London, this is an opportunity for rebels and Londoners-alike to experience healing, grounding, and restorative practices with offerings from a unique line up of faith leaders and facilitators representing traditions from around the world.

It is our chance to come together and pause, and to reconnect with our inner nature and joy for life in Rebellion. Bring a candle and lantern or jar.